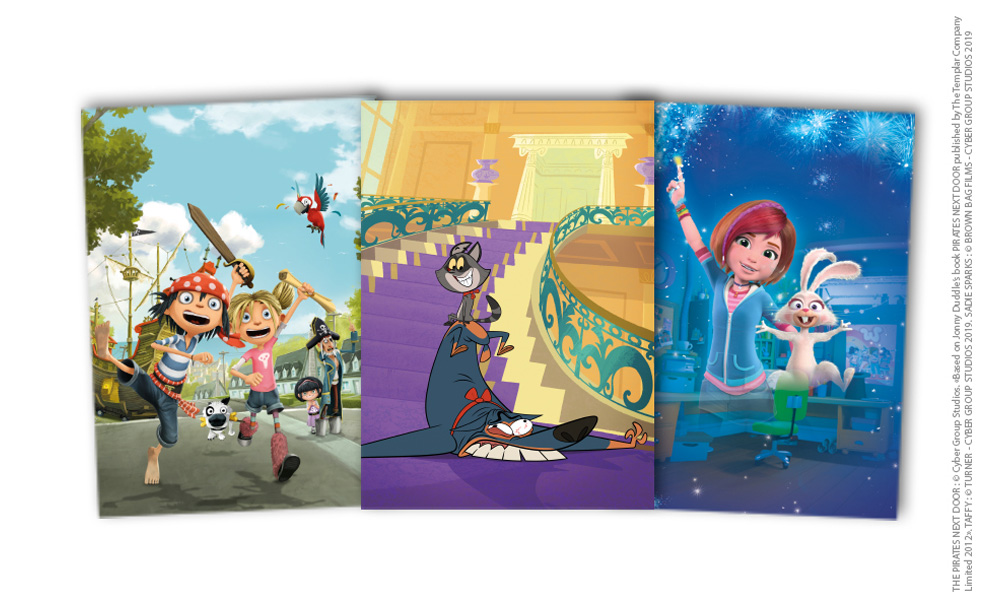 The Pirates Next Door, Taffy, and Sadie Sparks

Under the terms of the agreement, BTC Studios PLC will develop interactive software games based on Cyber Group Studios’ catalogue hit series Taffy, Sadie Sparks and The Pirates Next Door.

“We have already started production of the first two mobile games: Taffy: Feed the Kitty and Taffy’s Food Run. Within the next six months, we will start development of the next games, according to the agreed pipeline, as well as the broadcaster’s publishing schedule. The first commercialization is scheduled for the second quarter of 2020.”

Sadie Sparks (52 x 11’ HD – 2D and CGI), the new magical animated comedy series produced by Cyber Group Studios with Brown Bag Films for Disney Channel (EMEA & Russia), is already enchanting worldwide audiences, airing on Discovery (Latin America), Tele Quebec and debuting in 2020 on Turner (Italy), ABC Kids (Australia) and the U.K. free-to-air POP channel. The series, aimed at children ages 6 to 10, has been selected to be screened at BAFTA Kids Festival (London) and selected to be part of the International Panorama TV Series in the Kids category at Cartoons on the Bay – Pulcinella Awards (Italy). Sadie Sparks follows the daily life of a teenage girl who discovers that she has extraordinary powers. Unfortunately, such powers can only be harnessed in partnership with an ancient and extremely grumpy magical rabbit called Gilbert, who just wants to retire.

The Pirates Next Door (52×11’ HD – CGI), a comedy series produced by Cyber Group Studios for France Télévisions, is based on the best-seller by Jonny Duddle, winner of the United Kingdom 2012 Waterstones Children’s Book Prize. The series follows the daily life of a family of pirates who settle in a tiny seaside town. The series is already a worldwide success sold to over 100 countries and acquired by a large number of key broadcasters, including Clan (Spain), WDR / KIKA (Germany), RAI (Italy), NRK (Norway) and SVT (Sweden). This humor and action-packed adventure comedy series has been officially selected by the Chicago International Children’s Film Festival – CICFF (U.S.A.) in the Animated TV / Animated Production category and has been screened at MONSTRA 2019 – Lisbon Animation Festival (Spain).