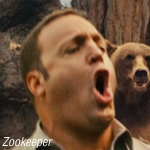 They say that love conquers all, and in the latest CG-laced live-action effort from Sony Imageworks, love conquers the very laws of the animal kingdom—thanks to some very convincing visual effects.

Zookeeper, directed by Frank Coraci (Click, Around the World in 80 Days), centers on the lovable yet unloved Griffin (Kevin James, who also co-wrote and produced the film): a zoo caretaker who has better luck with the lions than with the ladies. When Griffin decides to leave the zoo and get a life, his animal charges can’t stand to see him go. To keep their favorite human, and help him win the girl of his dreams (Leslie Bibb), the animals reveal that they can talk. And boy, do they—with the help of voice stars Adam Sandler, Sylvester Stallone, Nick Nolte, Don Rickles, Judd Apatow, Jon Favreau, Cher and many comedy notables. 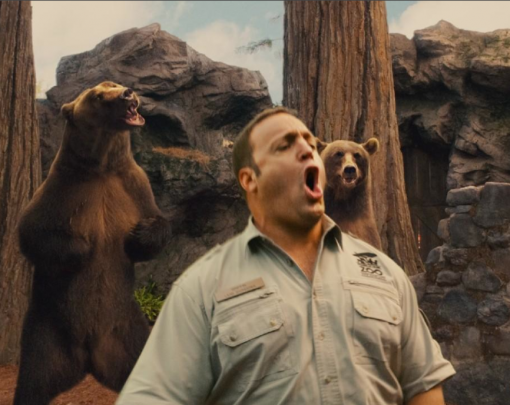 The film is perhaps the most ambitious use of animal performances ever to hit screens. Far from the rapid cuts and peanut-butter-on-the-gums lip synching techniques of old, Coraci and the effects team strove to deliver longer shots and believable emoting.

“We wanted the look and feel of the animal sequences to be homogenous with the rest of the film,” notes Imageworks visual effects supervisor Pete Travers. “Sounds simple, but it was the basis of all decisions. The animal shots needed to be longer and not so locked off so that the animals could feel like they were like any other character in the movie.”

Call of the Wild

Due to the inherit complications of getting a group of trained live animals of various species to play nicely with each other, the film called for approximately 800 vfx shots. A range of furry, scaly, beaked and amphibious characters needed to act convincingly, speak convincingly and interact both with their human co-stars and their zoo comrades. 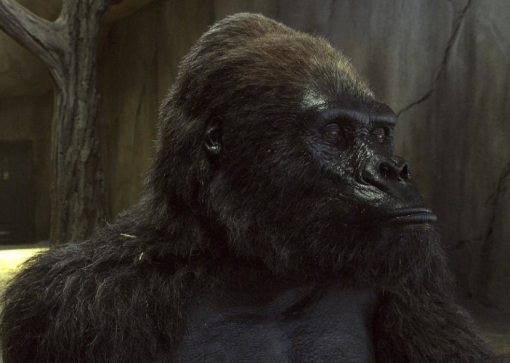 A scene from Zookeeper

“The biggest—and most demanding—sequence was the animal meeting, considering the number of animals that had to be put together that would not ordinarily coexist with each other,” Travers explains. “All of the wide shots had to be constructed via dozens of separate passes, and then each of the animals had to talk in sequence, so full CG faces had to be built and animated, which then had to seamlessly composite on to the live-action performances.”

The facial builds began early in production. A series of photographs from different angles were taken of each live animal’s mouth and lower jaw with a fisheye lens to gather the necessary visual information. But work didn’t end below the snout; the animators also had to tweak the animals’ eyes and body language to create more natural, human-like reactions. Footage of each actor’s recording booth performance helped guide the character animation team towards smoothly blending man and beast. 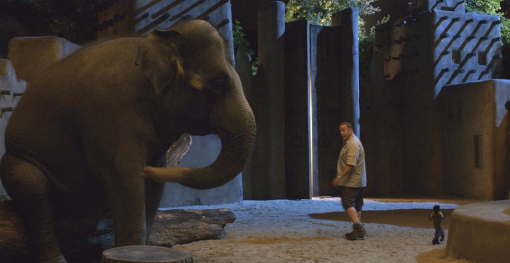 Kevin James faces off with a digital elephant in Zookeeper

To get the critters to emote (not to mention appear to be comfortably hanging out with their natural predators), the Imageworks team relied primarily on Autodesk’s Maya, Pixar’s RenderMan and a selection of the studio’s own proprietary tools. They also got helping hands from the artists at Zero VFX, Pixomondo. Some of the more complicated scenes which would have put either star James or the animals in danger were achieved with blue-screen technology and some clever handling.

For Travers, in addition to playing Dr. Doolittle, the most enjoyable part of production was the camaraderie and craftsmanship behind the scenes.

“Working with the director, Frank Coraci … He’s great to work with. Talented and compassionate, with a very clear vision for the film. It was great to see the very initial conversations we had become the guidelines for the entire filmmaking process.

“I also enjoyed working in post with the team here [at Imageworks],” Travers adds. “I think their character very much matched what the filmmakers wanted. And their talent showed in the work that they achieved. The stuff looks great!”