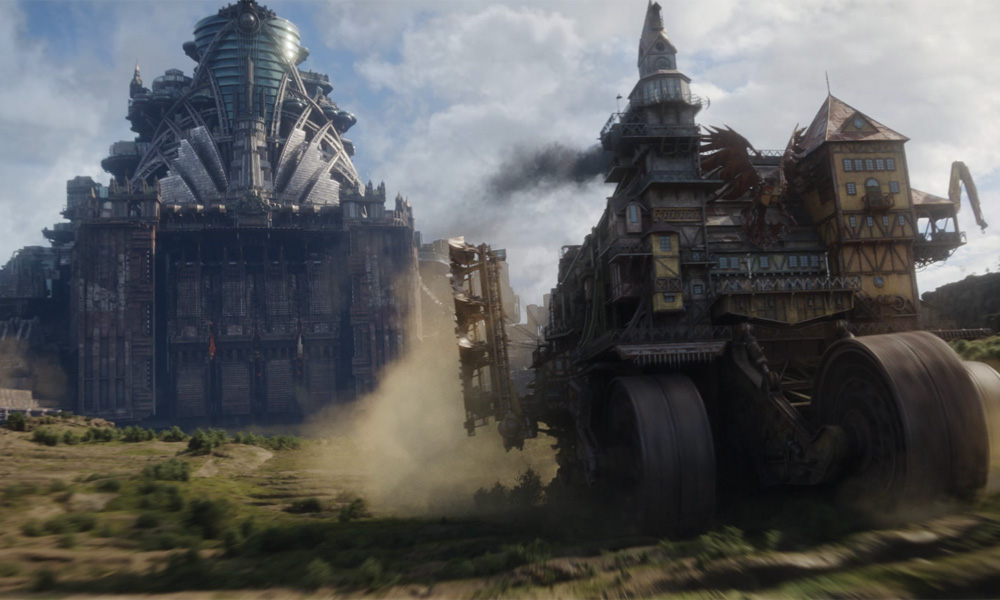 A decade ago, filmmaker Peter Jackson began development of a cinematic adaptation of an epic fantasy series, authored by Philip Reeve, about a futuristic world where cities have become fighting motorized vehicles. The project was handed over to storyboard artist and visual effects supervisor Christian Rivers as his feature directorial debut, assisted by the CG expertise of Weta Digital.

The film’s massive vfx workload was divided amongst three visual effects supervisors with Ken McGaugh (The BFG) dealing with opening act, Luke Millar (War for the Planet of the Apes) looking after the middle section, and Kevin Smith (Guardians of the Galaxy Vol. 2) overseeing the final battle.

“Having to create moving cities complicates everything both creatively and technically,” notes Weta Digital Visual Effects Supervisor Ken McGaugh. “Our pipeline wasn’t set up to handle vehicles as complex as an environment, so we had to create a new one.”

That’s why an innovative technique was developed, called layout puppets. As McGaugh explains: “Rather than being normal geometry it was layouts attached to a puppet. You have an entire neighbourhood as one layout. London is made of eight different tiers, and each tier is made up of sections containing buildings and parkland referred to as lily pads; they all move independently and are connected to the superstructure of London through suspension systems. Regrettably, we didn’t have the opportunity to sell that type of motion because that would have blown the scale of London, so we kept that subtle.”

On the creative side, the team faced an issue of physics. “People are used to seeing stationary buildings and cities,” notes McGaugh. “You either have to exaggerate the motion or stay perfectly still because anything in-between looks weird.” The upper classes live in the highest tiers. “There is a story point that the higher up you go in London, the smoother the ride. We did play with the idea of adding a rumble to the camera, but it ended up being distracting. Instead, we decided to have loose or hanging things always moving in the scenes that take place in the lower tiers.”

Familiarity was critical when designing the machinery supporting and transporting the urban dwellings. “We referenced big trucks or tanks. London has treads, Salzhaken [a small mining town] has wheels, and your mind fills in the gaps because you’re already familiar with those types of vehicles.”

“We were fortunate that Nick Keller, the concept artist who has been working on this project for many years on the client side, came over to Weta Digital to work in our art department in post-production,” explains McGaugh. “Nick was able to do what he normally does to much greater detail when it came out to figuring out the design style and socioeconomic demographics of a certain section of London. I lived for 10 years in London and there is no single distinguishable architecture — that worked to our advantage.”

The city of London became the largest asset that needed to be created digitally. “Our other cities were quite smaller so were all bespoke,” says McGaugh. “Dressing items were reused quite a bit, like pipes and fixture settings. For the approach to Shan Guo, where there is a debris field, we took our existing cities, broke them apart, kitbash them together, ran procedural erosion passes and did extra modelling to make it look like a different city that had been destroyed.”

As expected, the interaction between the environment and moving cities was complicated. “We had to find a blend between what we thought would be real and what people are used to seeing with vehicles going across terrain,” explains the vfx supe. “The cities also moved fast enough that the interaction with trees happened so suddenly that you didn’t get a chance to see it except for a few shots. These cities are so massive that they have a shockwave going through the earth in front of them. Those are some of my favourite shots because you realize that London is liquifying the earth in front of it.”

In addition, a practical trench set was built but needed to be replaced digitally. “That was one of the first set pieces that we shot on, but in post-production it was made three times deeper and twice as wide,” says McGaugh.

“For the aerial scenes around Airhaven there was a lot of looking at beautiful sunsets to get a feel for a cloud environment,” remarks McGaugh. “We kept on thinking about Bespin from The Empire Strikes Back. For the rest of the ground base environment we could only find visual references for certain elements or moods. The Earth has changed so much not only from the Sixty Minute War but also from the fact that cities have been crisscrossing Europe for hundreds of years and have heavily modified the landscape in an unnatural way. The mountains were always meant to be alien, because during the Sixty Minute War, the core of the Earth was broken.

“For what the treads look like across the landscape, our matte painting department 3D printed some of the treads from our city models, marked up model clay, and did a photometric scan of it to create a pallet of displacements that they could put into the ground. What looked good at ground level didn’t look good either in aerials or from the top of London so we had to have two designs for the terrain.”

The vfx team had many extensive discussions about the film’s aerial vehicles. “There was a lot of back and forth between our art department and the client’s,” states McGaugh. “The airships are filled with air, making them self-buoyant like balloons, but are styled more as actual aircrafts and have engines. They can fly fast. The designs need to look interesting but plausible. They have these air bladders to keep them buoyant. We went through quite a few iterations. Some of them would get bought off tentatively but when detailed-up looked too much like a flying corn chip! They had to go through a redesign. We built a cool one that looked like a box kite, but there was a story change that [made it unnecessary], so I dressed that airship in a few shots in the background.”

The movie also features stalkers, which are corpses taken from battlefields and brought back to life as machine-human hybrids lacking emotion and efficient in killing. One such being, performed by Stephen Lang (Avatar, Into the Badlands), is an adversary to the heroine Hester Shaw (Hera Hilmar). “Our main CG creature was Shrike, and he started off being entirely made out of metal,” explains McGaugh. “However, the filmmakers realized because he plays in dramatic moments that we were going to have too much difficulty having him emote through the little articulated parts that we had on his face. Shrike was remodelled to closely resemble Stephen Lang’s facial features — that gave the animators the ability to add some emotion to his face.”

What took the longest to accomplish was assembling all the pieces required to build London, says McGaugh. “Real-time rendering wouldn’t help there,” he explains, “but the animators had their own proxy version that would be fast enough for them to work with; however, more features would get added and it slowed down so they had to optimize the proxy version again. It was constantly a dog chasing its tail trying to get London useable for the animators.”

For McGaugh, the biggest challenge of all was completing the volume of work within the post-production schedule. “I’m still amazed at the quality we were able to maintain by pushing through that volume so fast,” he concludes. “I am looking forward to seeing the whole Salzhaken chase on the big screen, which was shown at Comic-Con. I also think one of the most exciting scenes is the big battle at the end.”

Mortal Engines is currently playing in theaters around the world. 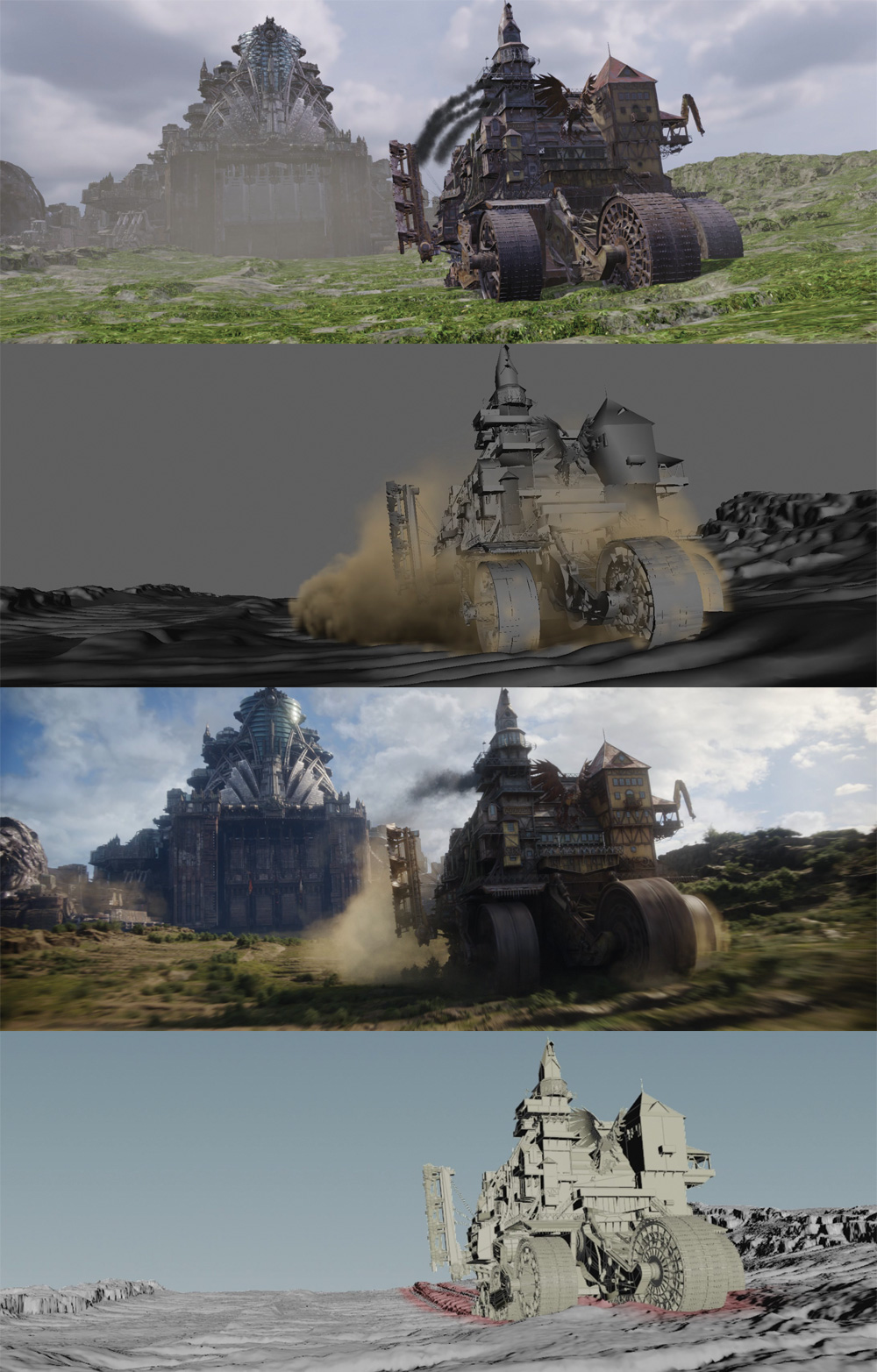 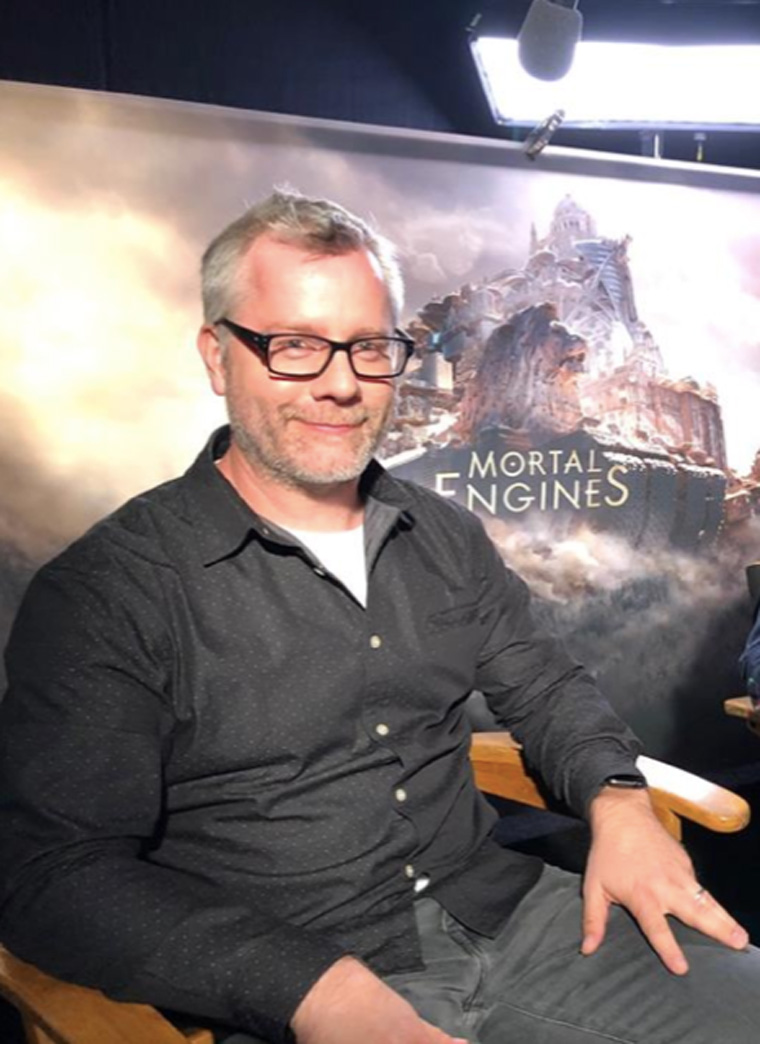