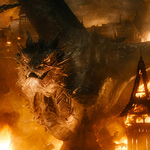 THE HOBBIT: THE BATTLE OF THE FIVE ARMIES

To combat the increasing demands of VFX complexity, Weta Digital recently created a new ray-tracing renderer called Manuka along with a pre-lighting tool called Gazebo. These not only came in handy for The Hobbit finale, The Battle of the Five Armies, but will also be crucial in addressing the challenges of the upcoming trio of Avatar sequels.

“It’s hard to think of the extra light that you craft onto the scene and then make it work in a believable and efficient fashion,” says Joe Letteri, the four-time Oscar winner and Weta’s senior visual effects supervisor. “It takes a lot of time and effort to do that. And you do it in a bulk fashion.

“The idea that we could start looking at path tracing everything and doing proper light transport — and then just firing the rays off and letting them go — has always been an ideal scenario. But the computing power needed to make that happen was tremendous. You really need something that’s a little more predictable when you turn the lights on. We decided to crack this over a four-year period. The ideal sweet spot would be if we could get the software ready at the same time the hardware’s fast enough.”

Weta first tested Manuka on Dawn of the Planet of the Apes, which was tailor-made for bouncing light all over that complex fur for so many CG apes in the heat of battle.

“What we can do with Manuka is take the guesswork out of it and have multiple artists working on the same scene and know we are getting the correct results. That really helped on the battle scenes (for The Battle of the Five Armies) because we could take in and block the lighting for what the environments would look like, and we could look at it in the wide shot and light the ground and all the grass and the mountains and see how it all fits. And we could put a character in there and see if he fit in with the same lighting.”

The Hobbit finale is bracketed by two of the most ambitious battles in the Peter Jackson canon: the opening destruction of Lake-town by the dragon Smaug and the third-act war that takes place on multiple fronts (including above Lonely Mountain with eagles fighting bats). Weta used its in-house fire simulation engine called Odin along with the Synapse software for volumetric effects.

“We ran all the buildings through four different levels of destruction,” Letteri says. “It was like dropping a ball on them and letting them get crushed. It gave us a realistic destroy field that we could use as background dressing at any stage, and then any of the hero action where Smaug came in and touched the buildings, those were custom simulated to work with his destruction. And then we tied the flame effects in. In other words, we used big pressure to destroy the buildings, figuring that was close enough to what the flames would do, and then as the flames burned away, they stayed attached to the broken pieces. That way it looked more realistic with the flaming embers. We had latitude to play with the flames.”

Weta did a top-down view of the area and asked Jackson to start sketching where everything happens. “And early on we got him to go on the stage with a virtual camera and have a look at the environment. And while he was there, we took notes, tweaking things around, trying to adjust the height of the saddle where the Dwarves come over, for example.

“It was all based on the one shot where Thorin (Richard Armitage) looks up and sees them cresting the hill. So it was a combination of what lens do we want to use? How high are we going to be? How close do we need to be to read the silhouette to get the forms of the Dwarves? And then as the battle progressed, we looked at the stages of how the armies were forming and where the Orcs were attacking.”

To manage the enormity of the battle sequence, Weta wrote a new tool called Army Manager, which sidesteps previz and takes you right into virtual production by allowing you to layout battle maneuvers.

“It was great because we could put thousands of characters in real-time on stage so Peter could do his virtual camera work and see these guys in the background, sometimes even in the foreground and use it for choreography,” Letteri says. “Then we’d dress in the close-up action: the beats of how the two front lines would clash, how the Elves leapfrogged the Dwarves to confront the Orcs, where we got into the hand-to-hand or the defensive moments. We had very specific choreography for each of them and we always went back and forth between the specific battle action and wide establishing shots so you could understand the flow of the battle and the choreography.”

As Letteri points out, The Battle of the Five Armies represents Weta’s continual refinement of virtual production, which has now become part of the mainstream of moviemaking.

You may also like...
Related Topics:Dawn of the Planet of the Apes, Gazebo, Joe Letteri, Manuka, MIddle Earth, Peter Jackson, The Battle of the Five Armies, The Hobbit, Weta Digital