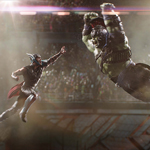 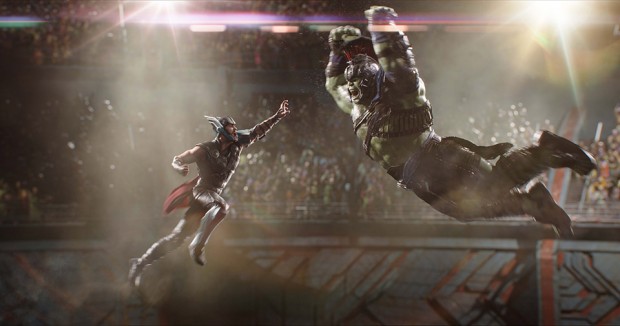 Creating the dazzling visual effects for Thor: Ragnarok  required a superhuman eye for detail and exceptional attention to the actors’ gestures.

Things never get any easier for Marvel Studios vfx supervisor Jake Morrison. This past year, the industry veteran worked with lead vendor Framestore along with 17 other companies —  including Method Studios, Rising Sun Pictures, ILM, Double Negative, Digital Domain and Iloura — to produce 2,700 shots for a cosmic road trip undertaken by an Asgardian prince and his green giant friend in Thor: Ragnarok.

“We go everywhere and see everything. It’s bonkers!” laughs Morrison. “It’s not like working with Captain America and, to some degree, with Spidey where there are a certain number of rules because Cap and Peter Parker are flesh and blood. You don’t have any of that in the Thor universe because your main character is a god. Then you’ve got the Hulk, who is like an atom bomb wandering around on two legs. What you can do with the story is almost unlimited.”

One of the most daunting aspects of the project was the Hulk having to deliver comedic lines. “He is not delivering Shakespeare,” notes Morrison. “It’s relatively monosyllabic stuff, but highly expressive and charming. We went back to first principles with Ryan Meinerding [head of the visual development at Marvel] who had done all of the initials and ZBrush sculpts for the Hulk in The Avengers.”

“We did a Medusa pass, which is like a live facial scan [without using traditional motion-capture dots] with Mark Ruffalo and plugged his performance into the Hulk 101 rig,” he continues. “The difference from that to once we had re-sculpted the Hulk completely and given him the ability to make different mouth shapes and nuances was amazing. There are some scenes in there where the animation team at ILM Vancouver, which did the redesign and rebuild, had a field day and it shows. You literally see the Hulk having a tantrum like a four-year old. He’s pumping his fists into the ground as he wanders off.  It’s funny stuff.”

Then there is the matter of filmmaker Taika Waititi (Hunt for the Wilderpeople) deciding to portray a CG rock-alien known as a Kronan, which appeared briefly in the beginning of Thor: The Dark World. “During the course of the shooting, there was a new character called Korg,” explains Morrison. “He became more likeable and interesting as the storyboard panels came in. Taika, who usually has a cameo in all of his films, said, ‘I want to put on the mocap suit and be Korg.’ Now you’ve got the director directing himself acting as a fully motion-capture character on set, literally adlibbing with Chris Hemsworth!” (Waititi played three characters in the film, at least partially.)

Just like the Hulk, Korg had to be able to deliver funny lines. “Rocks can’t deform or squash or stretch because otherwise it is going to look like latex,” notes Morrison. “The challenge was to create a new technical rigging system able to do a 1:1 mapping of Taika’s performance of Korg and that allowed for the smallest amount of squash and stretch. If Korg flexes his arm you have to make sure that the rocks can’t get bigger. What you have to do is rearrange the layer of existing rocks to create volume inside and give the illusion that the thing has actually flexed.”

“We do have improv scenes where Chris Hemsworth is adlibbing with Mark Ruffalo as Hulk delivering dialogue in real time in the camera,” remarks Morrison. “We had it mapped so we would make ad hoc motion-capture volume on set so the camera operator would get a feed piped back into the eyepiece of the Alexa 65 camera that they’re shooting with. The operator could look at Hemsworth and tilt the camera up to frame the superimposed Hulk over where Ruffalo was. Once we got to doing Korg it was really crazy.  Then as we got into post, Taika discovered the power of mocap ADR where he can now go, ‘In series two my dialogue was a little bit funnier than in series three, but Chris’ reaction is better in three.’  I told him you can stitch them together and all of a sudden he had this freedom to craft with the characters the funniest version of the scene.”

One of the film’s highlights is an epic gladiator battle between Thor and the Hulk. “I was racking my brains to come up with how you would choreograph a fight with a real 8’6” and 6’4” person,” reveals Morrison. “I hit upon an idea about doing it in reverse. What if that 6’4” person is the Hulk? How big does that make Thor? The answer is 4’8”. I said to stunt coordinator Ben Cooke, ‘Do you know someone who is a good stunt player who is a bit shorter?’  That’s when we got the amazing Paul Lowe who is like a scaled version of Chris. We had done storyboards so were able to choreograph the entire fight using a 4’8” Thor and 6’4” Hulk … When you take the Hulk version of the mocap and take the blue-screen version of Chris’ stuff and put the whole thing together, it fit together like a jigsaw puzzle. The moves are absolutely 1:1.”

Sibling rivalry goes beyond Thor and Loki (Tom Hiddleston) as their ruthless sister Hela (Cate Blanchett) escapes imprisonment and plans to expand the empire by commanding an army of the dead. “Her powers are insane,” observes Morrison. “She’s able to conjure weapons from thin air. Hela is a supervillain who has flare and panache, and has a multi-Oscar-winning actress playing her. The main thing we wanted with that was to be absolutely true to Cate. If she walks, tips her head and gestures with her hand a certain way,  all of that had to be honored when it went through the technical process. What you get on the screen with Hela is Cate’s performance magnified through the lens of the outfit that she’s wearing.”

To achieve the high level of authenticity, custom-made active markers were embedded in the motion-capture suit worn by Blanchett. As Morrison explains, “One of the weirdest things is that you have a CG character wearing this massive headpiece the entire time, and yet she has to be able to move around freely, execute hundreds of people, and do all of this without you questioning the fact. You have Cate standing there pleased as punch with six-foot-wide antlers on her head in full supervillain mode. In dailies, the studio would be finalizing shots with Taika, and we would literally park on a shot and go, ‘This movie is insane!’”

Disney released Marvel’s Thor: Ragnarok last month in the U.S. and other key territories. The movie grossed over $502 million at the global box office worldwide in its first week.