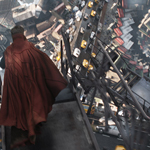 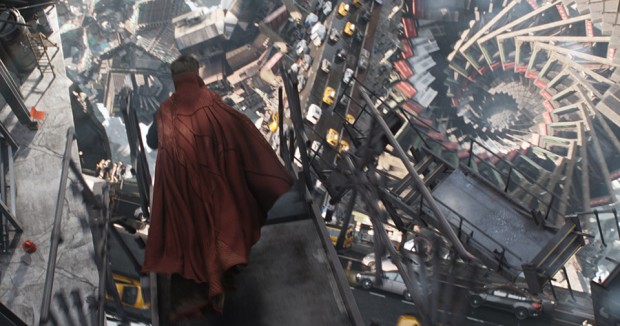 VFX artists prescribe a dose of Steve Ditko and a dash of Inception to create the unusual mystical dimensions that form the backdrop for Marvel’s Doctor Strange.

“For director Scott (Derrickson), it was about creating new worlds and magic,” says VFX production supervisor Stephane Ceretti. “And there’s a huge range of magic, going from the simple ring shields to portals opening to other dimensions to entire cities being bent to time going backwards.”

There are three major dimensional worlds — Mirror Dimension, Dark Dimension and Astral Realm — each requiring different looks. And Stephen Strange’s introduction was called “Magical Mystery Tour” (with VFX created by Method), a film within the film’s psychedelic journey, where Strange (played by Benedict Cumberbatch) gets pushed out of his body into worm holes and various kaleidoscopic shapes. The sequence was heavily inspired by the comic book artwork of Ditko, who co-created Doctor Strange with Stan Lee in 1963.

“Charles Wood, the production designer, came up with key points, which we did with concepts and previs (by The Third Floor),” Ceretti says. “And Scott responded to constantly evolving and moving worlds almost as one long shot, inspired by fractal worlds, macro photography and kaleidoscopic animation.”

But the biggest set piece – the most visually complex of any Marvel movie thus far – is a confrontation between Strange and Kaecilius (Mads Mikkelsen) in New York, which was inspired by M.C. Escher, who also inspired Inception.

“We looked at (Inception) and thought that it was a great power that they have to fold space when going into another dimension,” Ceretti said. “But we wanted to do it more as an action-sequence environment and make it bigger and crazier — add all this magic to it with the formation of space and the mirrors and the kaleidoscopic stuff. And we looked at a game called Monument Valley on the iPhone. Optical illusions needed to be sorted out and moved. It was trying to grab ideas from everywhere and make it exciting, like a Rubik’s Cube.”

Industrial Light & Magic handled the sequence, supervised by Richard Bluff, with more ambition than Inception. “We’ve seen bending buildings, we’ve seen folding, but what we haven’t seen was the fracturing of a city and the introduction of mass duplication on a mathematical level and infinitely complex fractals,” he said.

“When Strange and Mordo (Chiwetel Ejiofore) run out of the New York Sanctum, for example, we have the exterior of the building starting to deconstruct into smaller and smaller component parts and duplicating,” says Bluff. And after revealing gaps, we grow out of the Menger sponge (curve-shaped) or Mandelbrot (complex geometric figures) fractals.

“As the scene progresses, we move to a larger scale event of twisting into itself,” Bluff says. “We were trying to convey a cat-and-mouse chase where the fractal environment serves as the mousetrap.”

ILM created a 3D city, mirrored the edges and then rotated them 360 degrees to put the audience in the center of a tube where all the walls were mirrored versions of a New York City. Marvel pushed the notion of mirrored imagery, which, combined with kaleidoscopes, resulted in a visual design language for the rapidly changing fighting arena.

Framestore, meanwhile, worked on the complex, kaleidoscopic Mandelbrot design of sets (led by animation supervisor Nathan McConnell), among other VFX.

Because of the quantity of movement within the whole set, nearly everything needed to be animated. Even if Framestore didn’t strictly need to animate a prop, they had to make it available to the animators in case certain surrounding elements within the scene needed to move in a different way.

A new pipeline was introduced to provide the animation team with a rigging tool of its own. This tool included all of the levels of movement and pivots. The animators were able to rig everything themselves, and had the power to duplicate the geometry if needed.

Once animation had all of the assets, the effects team then placed additional Mandelbrot sponge fractal patterns inside it, using Houdini to drive a proprietary Arnold procedural surface shader at render time to give mathematical organic growth. The effects artists changed parameters for each object individually, and combined different surfaces in one scene.

“The process was very difficult,” Ceretti said. “We had less than six months to do the post on this film. But it’s like Guardians of the Galaxy, which I also worked on. There is so much in the Marvel universe and the genres that we can play with.”

Animation Magazine Turns 30!
Up in the Air