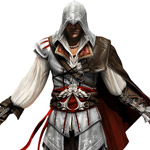 As we speed ever onward towards the summer blockbuster season, it’s time for our annual survey of top animators and vfx artists’ two cents. Find out what minds from Industrial Light & Magic, Framestore, Nickelodeon, Imaginary Forces and more consider the teacher’s pets and pet peeves of our industry. 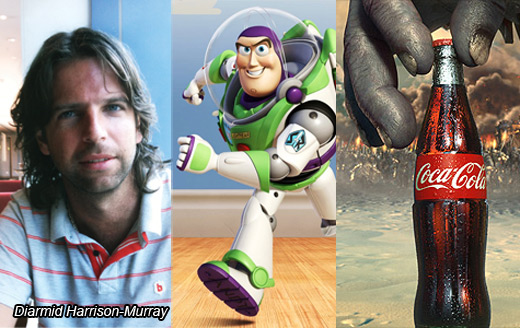 As head of 3D commercial productions at powerhouse studio Framestore CFC, Harrison-Murray has overseen a variety of visually stunning projects. Lately, he’s busted some phat CG beats with a crew of hip hop hamsters in the “This or That” commercial for the Kia Soul, supervised soaring sci-fi fx in the cinematics for Activision’s DJ Hero and tamed a fearsome dragon in Coca-Cola’s “Siege” Super Bowl spot.

Most anticipated videogames/TV show of 2011: BioShock 3, Portal 2, Curb Your Enthusiasm 8

The last animation feat that blew my mind: Legends of the Guardians

Advice for job seekers: Make sure you learn the technical principles behind vfx work. Different softwares come and go. 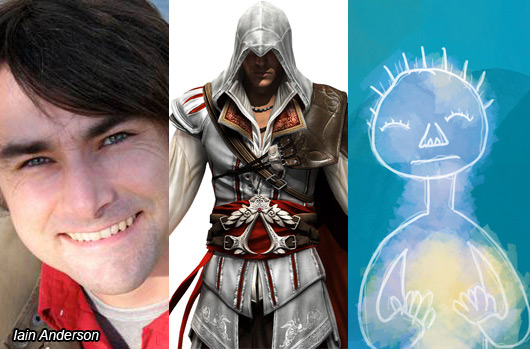 A man with many hats, Australian craftsman Anderson is an Apple Certified Trainer, editor, animator, coder, writer, designer and prolific blogger whose training tips and notes on art and technology can be found at FunWithStuff.com. Some of the pies he’s had his fingers in recently include editing and grading for director Craig Newland’s upcoming feature Frozen Moments, coding for Identikit and his digital children’s book/app What Was That Noise? available for iPad.

Favorite software: CoreMelt Complete in Final Cut Pro and Motion. Great for finesse on interesting jobs and jazzing up dull ones.

Favorite hardware or gadget: Magic Lantern for my Canon EOS 550D, or my iPad. Don’t make me choose.

Favorite animated character: I can’t pick just one, so I’ll just say that Ezio from Assassin’s Creed 2 can swan dive into a haystack like nobody else.

Most anticipated videogame of 2011: Elder Scrolls V: Skyrim. My wife and I will each sink over a hundred hours into this, and it’s being released on our wedding anniversary. Awesome.

The last animation/vfx feat that blew my mind: Scott Pilgrim vs. the World’s incredible integration of videogame visuals and film.

Biggest industry obsession: Apple. It’s like everyone else in computing has forgotten how to make interesting devices that work well.

Latest online addiction: I’m trying to break that habit, but I just signed up for Flickr Pro, so I guess I’ll be reposting a few of my shorter videos there.

Advice for job seekers: Enter contests! Nothing like a nudge and a deadline to help you make something good. You might even make money—I won $1,000 from Hungry Beast for an animation last year. Don’t give up, and remember that judges are unpredictable. A cool video I once made was beaten by an unedited film of a sheep scratching itself against a fence. 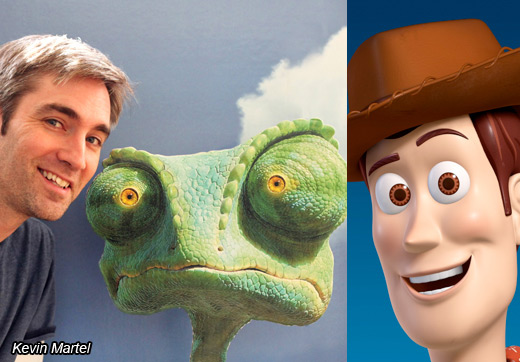 Martel can be found enjoying a refreshing sarsaparilla at the local saloon, having just come off the dusty trail of Industrial Light & Magic’s Western-inspired Rango, on which he served as associate animation supervisor. Before slinging his lasso around the studio’s first animated feature, he leant his artistry and animation talents to vfx megahit franchises Harry Potter and Pirates of the Caribbean

Favorite hardware or gadget: My iPhone

The last animation/vfx feat that blew my mind: Everything in Avatar.

Biggest industry obsession: Studying every performance that makes me laugh.

Biggest industry gripe: Pop culture references that keep a movie from being timeless.

Latest online addiction: Facebook. Have you heard of it? I think it’s going to be huge!

Advice for job seekers: Don’t be afraid to apply. Even if it doesn’t work out immediately, try to learn from each experience. Ask questions so you can be better prepared for the next one. 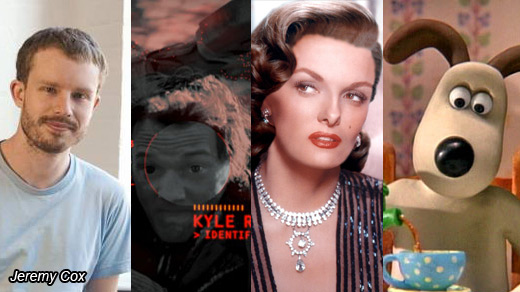 As a designer for award-winning production/design house and creative agency Imaginary Forces, Cox has been given the keys to artistically joy ride a variety of media projects. Examples of his work can be seen in the opening titles to TV series Boardwalk Empire and Rubicon, in the flashback sequences of popular videogame God of War III and in the titles and “machine vision” sequences of Terminator: Salvation.

Favorite software program: Whatever gets the job done. Lately that has been a lot of Cinema 4D.

Favorite hardware: My Mac Pro. It had better be, given how much time I spend on it!

Most anticipated film of 2011: The Adventures of Tintin. I grew up with the books, and if anyone can do them justice, it will be Spielberg and Jackson.

The last animation/vfx feat that blew my mind: I love the “de-res” effect in TRON: Legacy. It is a beautiful mix of rigid body and fluid dynamics with the perfect stylized realism to fit in the world of TRON.

Latest online addiction: I recently ran across a little web game called BoxCar 2D. It uses genetic algorithms to evolve cars to navigate obstacle courses. I could (and have) watched it for hours. [boxcar2d.com]

Advice for job seekers: Be curious, never stop learning and surround yourself with people more talented than you. 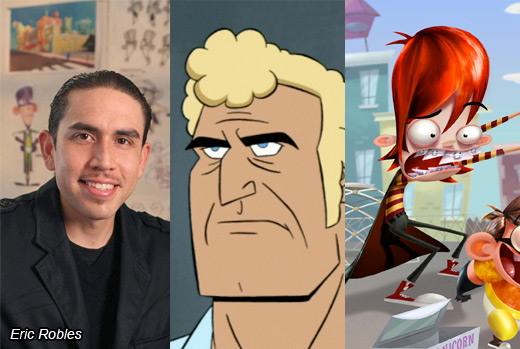 Now into the second season of his energetic and stylish CG series Fanboy & Chum Chum, which airs on Nickelodeon, creator and executive producer Robles shows no sign of slowing down (except to answer our questions, which he probably did typing with his toes while making script notes, tossing off storyboard suggestions and juggling chainsaws—no one said TV animation was easy). Before landing his own show, Robles helped create characters for Ni Hao, Kai-Lan, The X’s and The Grim Adventures of Billy & Mandy.

Most anticipated film/TV show/videogame of 2011: Cowboys and Aliens/Two and a Half Men… Ha!/ L.A. Noire

Advice for job seekers: Learn how to promote yourself through the internet to show off your skills. 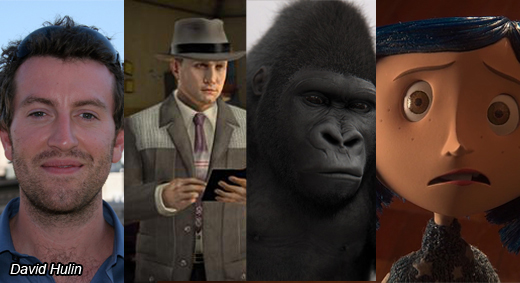 As part of Framestore CFC’s Stateside commercials team, Hulin serves as a director and head of CG. You may recognize some of his work in integrating animated creatures and characters into live-action spots in campaigns for Time Warner Cable (director), Sour Patch Kids (CG supervisor) and Corning’s Gorilla Glass (director/animation director), in which a business savvy CG gorilla puts the material’s durability to the test.

Favorite hardware: My MacBook Pro has everything on it and goes everywhere with me.

Most anticipated videogame of 2011: L.A. Noire

The last animation feat that blew my mind: Coraline

Biggest industry obsession: Working with people who want to creatively collaborate to produce the best animation.

Advice for job seekers: It’s 60 percent talent and 40 percent personality. No one wants to work with a weirdo! 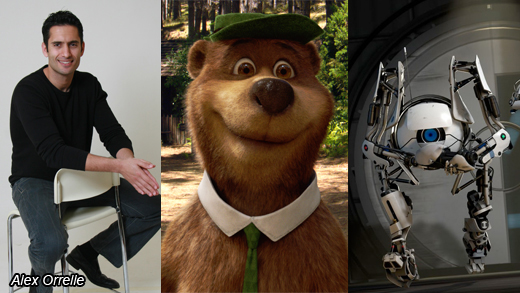 Despite running his own animation studio in Israel, Crew 972, Orrelle still found the time to bring a classic cartoon pal to life in an all new dimension as animation director on last year’s Yogi Bear in 3-D. Other delicious treats from his animation pic-a-nic basket include a Sundance Festival award and a stint as a Pixar animator.

Most anticipated videogame of 2011: Portal 2

The last animation feat that blew my mind: Toy Story 3

Biggest industry obsession: I love eccentric character animation. Quirky, big and exaggerated or subtle and minimal, I love it when an animated character goes where no 3,000 films have gone before.

Latest online addiction: Avoid it like the plague. I turn off my wireless adapter when I work, so I don’t get e-mail or surf the web.

Advice for job seekers: A virtuoso can own the room by playing a simple scale. Don’t bite off too much. Be brave, pick a small exercise and nail it. Keep short films short! 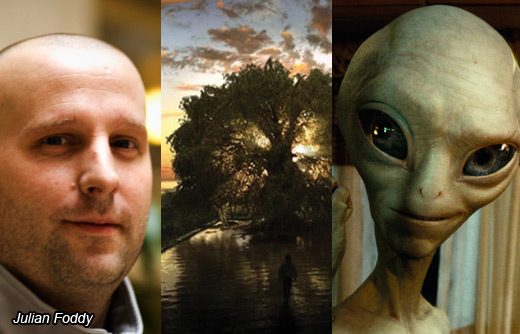 As CG supervisor at London-based visual effects studio Double Negative, Foddy has most recently been charged with making audiences believe in little grey men with the alien adventure comedy Paul. Other examples of his explosive (literally) work can be found in action-packed flicks Green Zone, The Dark Knight and J.J. Abram’s monster movie Cloverfield.

Favorite gadget: My Canon 550D—using it to make stop-motion animation clips for my two-year-old son.

Biggest industry obsession: Blowing things up. Any show I do with explosions or destruction, those shots are mine!

Biggest industry gripe: That our names come after the cleaners and caterers in the credits!

Latest online addiction: Buying lenses and accessories for my camera…must stop it!

Advice for job seekers: Learn as much as you can about every aspect of the industry—whilst everyone is a specialist of some sort, the broader your skillset, the higher the chance of getting hired. 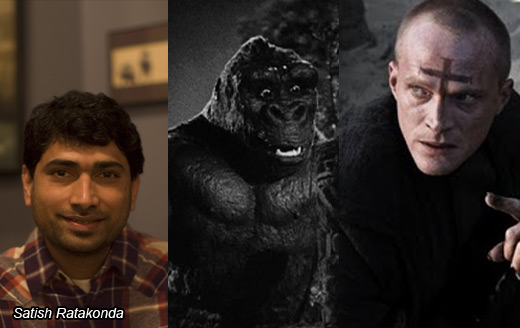 Talk about a fantasy job: vfx artist and senior compositor Ratakonda is charged with helping bring otherworldly effects to life at eminent Bay Area house Tippett Studio. This year alone audiences can check out his work in the vampire-slaying Western Priest and the Greek myth-based Gods vs. Titans tale Immortals, not to mention the vampiric and lupine feats of the Twilight Saga flicks.

Favorite hardware or gadget: MacBook Pro and any digital camera

Most anticipated film of 2011: Super 8 and Immortals

The last vfx feat that blew my mind: The Lord of the Rings Trilogy

Advice for job seekers: If you are curious, observant and passionate about visual effects, being patient, persistently challenging yourself, researching and