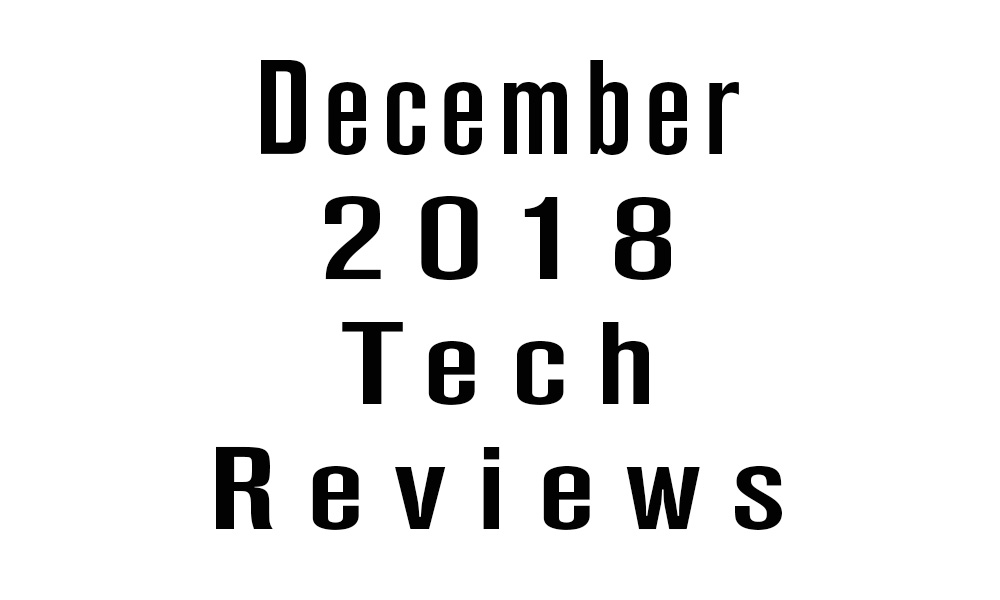 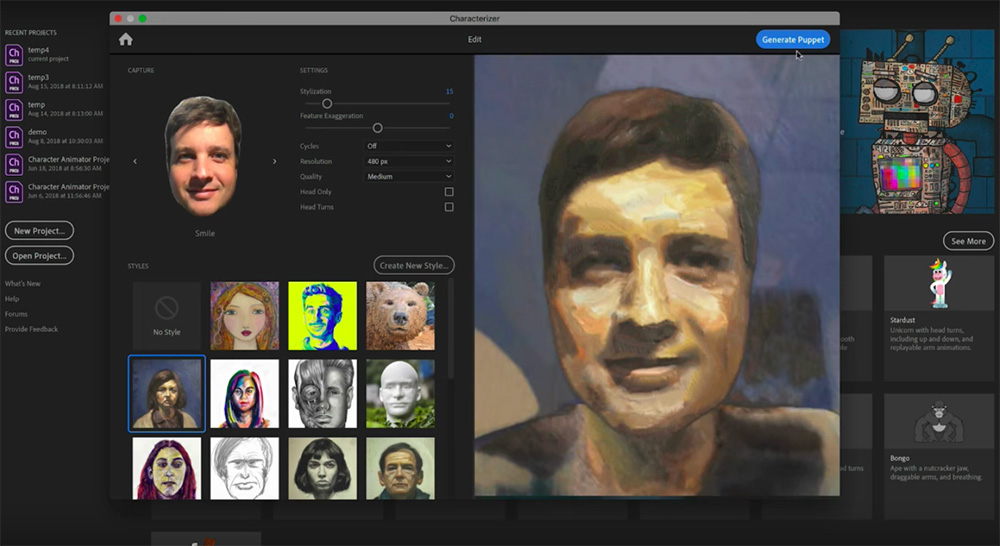 This past September, Adobe revealed details on the new features that will be added to its Creative Cloud software suite by year’s end. One of those new additions is Characterizer.

In its first inception, I wasn’t bowled over by Character Animator. I felt it was an easy way to make things move, which basically opened up the ability to people who had no experience doing it in the first place. This leads to horrible animated work, and that leads to judgments against the tools rather than the talent — from people like me, for instance. However, I also knew that when it got into the hands of animator-animators, that we would start to see some ingenious stuff. The animated Trump sequences on The Colbert Show (which evolved into Our Cartoon President) would be one of those examples — not so much in the fidelity of the animation, but the ability of the technology to drive the animation in a live situation.

These actual production situations generate feedback to Adobe on where they need to focus development. Character Animator seemed to have started as a quaint idea rather than a fully formed development plan — driven by the feedback of the users to create a better product. I see this in Characterizer as well, which is a seed of an idea that doesn’t know the strength of its own potential.

Characterizer is able to take samples of your face from your webcam, analyze the poses and, via Adobe’s AI/machine learning algorithm Sensei, can learn what pieces of your face are what. You can then apply different artistic styles to your visage. This is not limited to “pencil sketch” or “charcoal” or “oil painting.” You can use photos of objects that have a color palette that will be transferred to you. It doesn’t have to be entirely automated, though. There are tools to define areas of the sample image to apply to your features.

Once you have something you like, the result can be tied into Character Animator rigs which are able to be driven by your own performance through your webcam or other camera. Now you have a live performance that could be a pen and ink drawing … or a wall of bricks. It’s quite fascinating.

The results currently range from artsy to terrifying, but not necessarily artistic — that would assume some artistry is involved. This is because we are very early in the evolution of Characterizer. Sensei is learning, and continues to learn how people’s faces work, and how to apply the looks to them. The more it learns, the more refined the results will become. The more refined the results, the more users will be attracted to using it. Then the more Sensei will learn. Some have predicted major advances to happen with Characterizer in the next five years. I think those people are underestimating the power of machine learning.

Price: Varies; Character Animator available as part of CC for $52.99 per month. 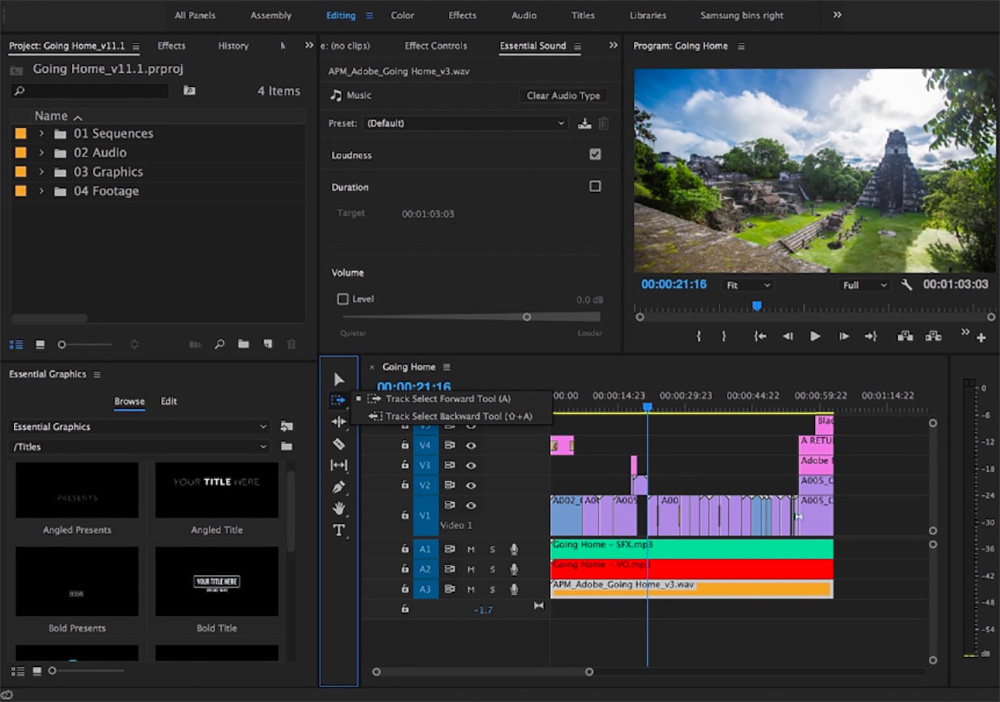 Adobe’s recently announced plans include a lot of advances in most of the CC apps, but there is also a bunch of cross-pollination. For the purposes of this review, I’m going to focus on Premiere Pro because it reaches into the new stuff for After Effects and Audition as well. There aren’t any huge updates to the actual “editing” part of Premiere Pro, but there are some sweet additions to the supplemental things that make our projects look and sound good.

A primary upgrade is a set of tools that will change your whole color workflow. It’s called selective color grading. Those familiar with Nuke will know this as a HueShift. Basically, it lays out your color wheel into a horizontal line. You then add control points to isolate a specific hue you with to modify or select. The resulting curve can be as soft or hard as you wish depending on how specific the hue is you wish to isolate. This can be used to adjust luma or shift hue, or what I use it for quite a bit: de-spilling. It’s extremely powerful, and once you wrap your head around it, there won’t be a day that goes by that you won’t crack it open.

After Effects has more powerful motion graphics templates that can be ported over to Premiere Pro. What this means is that the motion graphics artist can design the titles or branding for a spot or TV show — and then send it over to the editor. Parameters can be promoted to only reveal the components that will be changing. This way, editors can update credits, lower-thirds text, etc., but use the base animation from the artist. A huge timesaver to allow the text change to happen in editorial — keeping the motion graphics artist free to make new, super cool graphics for the next show.

As an extension of the motion graphics tool, Premiere Pro can accept data from a CSV spreadsheet, and then utilize the data therein to automagically create infographics. Again, this is a huge timesaver to allow the data to drive the animation.

But my absolute most favorite new tools lie in the audio. Using Sensei, Premiere Pro and Audition have intelligent denoising and de-reverbing tools. Using analysis of your audio (and presumably a gazillion other audio samples), Sensei learns what is the sound and when is not the sound (a.k.a. the noise). It can then separate them out. The same holds for the de-reverb (a word that I’ve never heard of until now). After learning, Sensei detects the additional echoes (the reverberation) of the primary sound and filters them out. I can think of at least 20 things that I need this for, just off the top of my head.

Price: Premiere Pro available as part of CC for $20.99 per month. 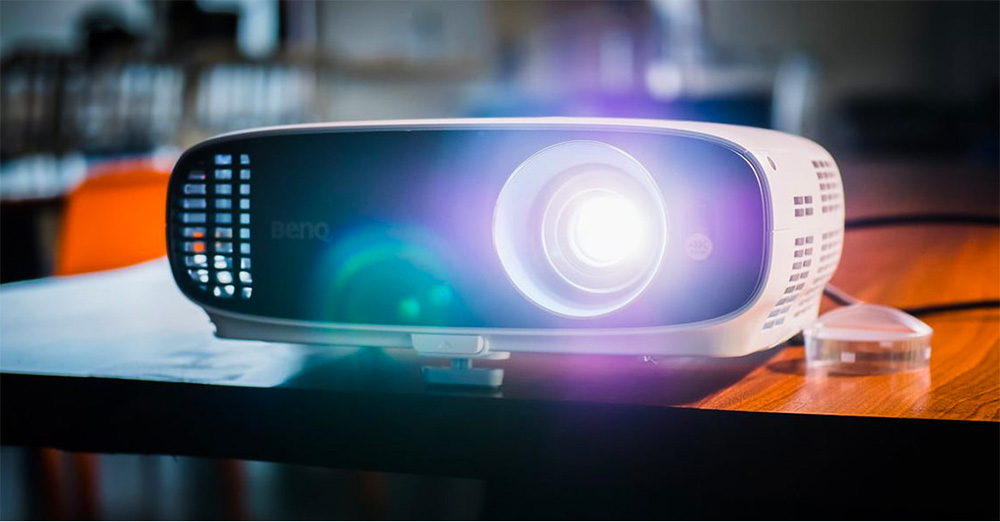 If you are thinking about upgrading your edit suite to something that clients can come to and that you can use for color grading, but you don’t have the budget for a big-time Christie projector, you need to check out the BenQ HT2550 4K UHD Projector.

But size isn’t really the important thing anymore. It’s all about color depth, accuracy, brightness and contrast ratio. The HT2550 can throw 2200 ANSI lumens — which might be way overkill for your dark home theater or your DI suite, but it means that it’s still going to be bright in well-lit rooms or outside. And you can project that with normal use for an estimated 4,000 hours. All of that with a contrast ratio of 10,000:1

Inside, is single DMD (digital micromirror device) DLP (digital light processing) technology that allows it to keep its slim profile. More costly projectors will have three chips for each of red, green and blue. But the combination of the latest single DMD tech and the high-quality lens with low-dispersion lens coatings, give the HT2550 an amazingly crisp image.

Then, there is the color. Full disclosure, I wasn’t able to run a color calibration because a) I don’t have the equipment and b) I wouldn’t know how to use the equipment. But, with an eyeball check against my HP DreamColor, which is calibrated, the Rec. 709 feels pretty darn close. I’d recommend a real calibration if you are in the business of color grading. With 30 bits of display color (1.07 billion colors) and HDR10 support, you should have enough bandwidth. BenQ specifications are 96% Rec. 709 coverage and a Delta E of less than three — which is not quite as low as where your grading monitor should be, but it ain’t too shabby.

At roughly $1,500, the HT2550 is priced super low for what it brings to the table. For independent professionals wanting to upgrade their suite, it’s a great stepping stone until you can get a 70’ screen in a screening room. You can also use it as a nice home theater, or put it in the backyard for your Saturday movie night party.