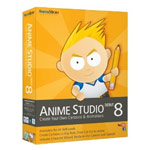 Smith Micro 2D animation software, Anime Studio, has been added to the Mac App Store. The software application has become one of the top selling Graphics and Design software, following closely behind Adobe’s Photoshop Elements and Pixelmator.

Anime Studio Debut is a unique app that enables people of all skill levels to imagine, create and animate 2D movies, cartoons, anime and cut out animations. Notably, the apps innovative bone-rigging system allows creators to animate quickly and efficiently.

The product was featured in the “New and Noteworthy” section within a couple days of being introduced to the Mac App Store. Further success of the app has warranted Anime Studio to be included in next weeks Featured Apps at the store, along with a demo video that will be promoted by the Apple staff.