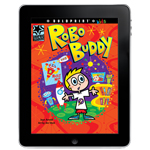 Skyreader Media, a recently established division of Skywriter Media and Entertainment Group, announces the launch of its Skyreader platform for quickly turning books and other intellectual properties into interactive eBook apps for the iPhone, iPad and other emerging tablet devices.

Created to deliver Skywriter’s library of TV properties and more than 1,500 children’s book titles to e-readers around the world, Skyreader is designed to greatly reduce the time it takes to translate books and other content into engaging eReader Apps.

“Skywriter is known for creating great family entertainment, and through Skyreader we can bring quality content to children through interactive, educational and engaging eBook Apps that go well beyond the turning of pages,” said Kevin Gillis, CEO of Skyreader Media. “We have more than 1,500 book titles and over 200 half hours of award-winning television content under license. We’re dedicated to delivering high quality apps in the marketplace to create a new standard in reading engagement for kids and parents alike.”

Skywriter Media revealed the line-up of their first interactive eBook apps, which the company described as follows:

Headquartered in Toronto, Skywriter  is a fully integrated producer and distributor of original programming and content for all forms of traditional and digital media worldwide. Skywriter was launched in August 2009 by distinguished entertainment industry executives Kevin Gillis (CEO), Michael McLaughlin (president) and Michael Iscove (COO/CFO).