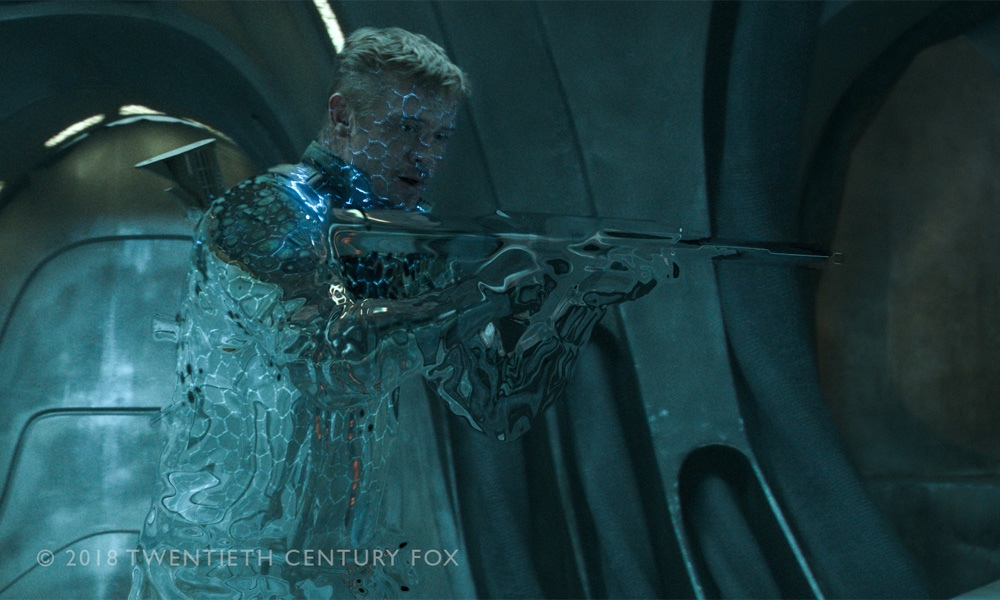 In The Predator, 20th Century Fox’s reboot of the sci-fi horror franchise, the universe’s most lethal hunters return to Earth, stronger and deadlier than ever. Having upgraded themselves with DNA from other species, they take on a ragtag crew of ex-soldiers and an evolutionary biology professor in a battle that could mean the demise of the human race.

Rising Sun Pictures (Peter Rabbit, Thor: Ragnarok, Game of Thrones) signed on as a visual effects supplier to the film late in its production cycle, assuming the formidable task of delivering a host of complex effects in just 11 weeks. The package ultimately tallied more than 100 shots and included CG environments and sets, the Predator’s signature “cloaking” effect, and dramatic (and occasionally gruesome) enhancements to combat scenes. They also produced visuals for the film’s stunning opening shot.

“We’ve increased capacity and added talent in order to take on large effects packages of work like this and deliver quality on demanding schedules,” says Wood. “Our success on Predator was also aided by the close rapport we developed with Matt, Blondel and, ultimately, Shane Black. We stayed in close communication to ensure they were clear on what we were proposing and how we were executing.”

RSP’s most challenging task involved the crash site of a Predator spaceship dubbed the Ark. Artists produced a photoreal 3D matte painting of the background mountain environment as well as 3D models of the exterior and interior of the damaged ship. “Because the scene involved such a big piece of work, we tackled it first and fast-tracked it through our pipeline for match-move, model build, surfacing, lighting and so forth,” recalls Wood. “That allowed us to generate fully composited versions with several weeks to go.”

The digital mountain and spaceship elements were large in scale and needed to appear convincingly real as actors moved around and through them. “The set is seen from many angles, but the position of the ship doesn’t change, so that provided the parameters that we used in building our models,” notes CG supervisor Julian Hutchens. “The scene was filmed in a quarry in Vancouver with just a small gangway as the practical part of the spaceship. Everything registered to that.” The illusion was cemented by the studio’s 2D team, who rotoscoped characters, added drifting smoke and other atmospherics, and adjusted depth of field.

The short production timeline meant that coordination between various visual effects departments had to be especially tight. “Our plan of attack was to build a framework and identify assets that were our greatest dependencies and group shots that involved common assets,” explains visual effects producer Arwen Munro. “That helped formulate a vision and a game plan, and allowed us to hit the ground running.”

The cloaking technology, used by the alien creatures to become invisible, dates to the franchise’s 1987 original. In the current film, the effect has been refined into a three-dimensional field of iridescent, shimmering light with characters alternately solidifying and vanishing from sight in a matter of seconds. RSP tried its hand at the cloaking effect for a scene where it is used by a human character, Quinn McKenna (Boyd Holbrook), who suddenly becomes visible while engaged in a fistfight with another soldier.

As Wood notes, the frenzied action complicated the process of making the actor appear out of nowhere. “The ‘cloak’ is skintight; it hugs the surface of whatever object or creature it’s affecting,” he explains. “As a result, we had to execute an extremely tight match move as McKenna becomes visible. The work was very delicate, especially regarding the creases in his clothes and the outline of his fingers.”

“Our brief was to pay homage to previous Predator films while upgrading the look of the effect,” adds 2D lead Jess Burnheim. “We started by removing the cloaked character from the original photography and then applied the match move of the removed character along with a slew of CG passes created by our Look Development team. Working in coordination with our CG team and the client, we arrived at a recipe for a very cool effect.”

RSP’s work also included many subtle effects to enhance action scenes. That ranged from muzzle flashes to tracking blood to the face of a character whose eye is shot out by a tranquilizer dart. In one especially memorable instance, artists created a deadly boomerang-like weapon that slices a character’s hand off and pins it to a tree. “There was a lot of 2D only work on this show and that worked to our advantage,” notes Burnheim. “It meant that the 2D department was able to get cracking right away, while the 3D department was busy building CG assets.”

The most prominent examples of RSP’s work appear in the film’s opening scene, which is set in space. The film begins with a pursuit as one Predator spacecraft eludes another by passing through a worm-like portal that sends it to Earth. The portal, says Wood, needed to plausibly conform to the laws of physics and appear visually stunning. “The look of the portal is formidable, but interesting, a bit like a spiral nebula,” he observes. “It’s fully three-dimensional and incorporates highly-developed fluid dynamics. It’s a hole that floats in the vacuum of space.”

One highlight was working on the opening sequence, says Munro, “It was a privilege to have the opportunity to have creative input and build shots from scratch.”

Wood concurs and says the project offers a good example of RSP’s ability to deliver exceptional results on a quick turnaround. “Working on a short schedule, our team produced shots that enhanced the story and met the aesthetic and technical requirements set by Shane Black and his production team,” he states. “They really rose to the occasion.”

More info on the studio at rsp.com.au.