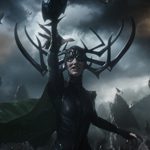 Highlights of RSP’s contributions include a sequence dubbed “Val’s Flashback” involving a furious battle between the film’s villain, Hela (Cate Blanchett), and an army of Valkyrie. The team also played a key role in “The Palace Battle,” an epic confrontation between Hela and Thor (Chris Hemsworth), and in reimagining the Bifröst Bridge, a magical rainbow that links realms of the Norse cosmos. The project is especially noteworthy for the standout work of RSP’s expanded character animation department, who were tasked with creating photo-real horses, Valkyrie and skeleton soldiers, as well as other digital characters.

“We were honoured to be selected by Marvel Studios as a vendor on this film, and proud of the work that we delivered,” says Managing Director Tony Clark. “We have been systematically growing our human and technical resources, especially in character animation, to tackle complex, large-scale projects, while maintaining the artistry, craftsmanship and attention to detail that are hallmarks of RSP. The results are evident in Thor: Ragnarok.” Nearly 200 artists took part in the project for RSP.

“Val’s Flashback,” which plays out in artful slow motion under glittering light, describes a fatal encounter between Valkyrie warriors and Hela, the Asgardian Goddess of Death. The female warriors, riding winged steeds, emerge from portals in the sky only to be mercilessly struck down by Hela using her magical powers.

Led by Senior Visual Effects Supervisor Tom Wood, the RSP team began working on the scene in early 2016 during pre-production. Artists prepared 3D pre-visualisation encompassing every element of the sequence to serve as a guide for subsequent production and post.

Production was conducted on a soundstage in Queensland. Slow motion effects were achieved by capturing actor performances via a Phantom camera operating at 900 fps. The imagery was given a further surreal cast through the use of a rotating lighting system that bathed the scene in undulating patterns of light and shadow.

RSP was a natural choice for the flashback scene due to its considerable expertise in slow motion visual effects. For the films X-Men: Days of Future Past and X-Men: Apocalypse, the studio provided the visual effects magic for several scenes demonstrating the hyper-speed abilities of the mutant Quicksilver. Thor: Ragnarok, however, takes slow motion into a new, and technically challenging, direction.

“Taika and Jake conceived a fantastic scene,” notes Wood. “We pre-visualised their concept, attended the shoot and, as soon as editing was complete, went straight into production. The pre-vis broke the sequence into multiple layers, each of which was shot separately, and reassembled bit by bit in post.”

“The flashback sequence involved high-level creature animation and digital characters, as well as very detailed compositing, due to the unusual lighting effects,” adds Visual Effects Executive Producer Gill Howe. “It was also a challenge because it was a standalone piece, and a significant scene in the movie. It had to be unique, different, and something that had never been done before.”

Considerable attention went into the creation of the Valkyrie and horses. Often revealed in close up, the animated characters had to be photo-real. “We spent a lot of time in look development, making sure that their fur and feathers were right, and that the muscle system moved like a real horse,” explains Head of Creatures Tim Mackintosh. “If they had been monsters, we would have had more leeway, because monsters aren’t real, but everyone is familiar with horses. Although these were mythical, winged horses, audience members will have an idea for how they should look and move.”

RSP also took great care in preparing Hela’s accoutrements, including her cape, the cowl she wears on her head, and her menacing antlers. Artists initially developed concepts for Hela’s costume for a trailer that screened at Comic-Con in 2016 but continued to refine the look through later stages of production. “It was quite tricky,” recalls Head of Lighting/Look Development Shane Aherne. “We needed to remain consistent with the assets’ practical counterparts and with their representations in the original Marvel comics. But we also needed to accommodate Cate Blanchett’s performance and the action of the scene.”

RSP utilised digital characters to perform actions impossible for a human or to facilitate integration into the scene. This was especially important for characters that exhibited magical powers or super-human strength. In most instances, the character’s motion was derived from motion-capture data from the actor. “Motion capture will get you 90 percent of the way there, but the rest has to be sculpted to the CG character,” notes Mackintosh. “It’s a labour-intensive process and one that requires artists with a lot of different skill sets.”

“The Palace Fight” depicts a confrontation between Hela and Thor that plays out over some 60 shots. Although live-action elements were shot on a practical set, the production ultimately chose to have the entire background replaced with a 3D environment created by RSP. “We produced a palace that was much bigger and with a higher ceiling than was possible on any stage.” explains Wood. “It was more spread out and more opulent.”

In the finished scene, Thor is the only non-digital element. “Replacing the background in its entirety created its own challenges,” observes 2D Lead Jess Burnheim. “It meant that we had to extract Chris Hemsworth from the plate with no blue screen. We literally rotoscoped everything, including his hair. It was painstaking work.”

The Bifröst Bridge appears in another scene involving a pitched battle, this one pitting Hela against Thor and Loki. “The Bifröst has been seen in previous Marvel productions, but in Thor: Ragnarok it has a unique look because we’re inside it,” Burnheim explains. “We had old reference to work from, but we had to develop the effect further and create something that would work with the plate photography.”

“One thing that happens in the scene is that Thor is pushed into the side of the bridge and it shatters,” he adds. “That raised the question, what is it made of? Is it light? Is it physical? It took many iterations to get it to feel right.”

RSP also contributed to a scene featuring Hela’s troop of skeleton soldiers, which again involved the use of digital characters. Additionally, artists created a 3D version of Thor’s famous hammer for a scene where it is crushed by Hela.

Despite the project’s complexity, lengthy schedule, and growing shot list, the work proceeded smoothly. Mackintosh attributes that to the unique structure of RSP’s production pipeline. Its integration of animation, character development and compositing facilitates collaboration between departments and allows the studio to turn out iterations and finished work fast.

“Animation and creatures are separate entities at many studios, but we’ve unified the departments in a single smooth pipeline,” Mackintosh says. “When working to deliver shots, there is always a lot of back and forth between the teams, and we feel it’s vital to keep them working together.”

Howe notes that the cohesiveness of the RSP team (most senior artists have been with the studio for years) also promotes efficiency and delivers cost savings.

“As this was our first Marvel Studios show, we wanted to give it our best effort and ensure that everything we delivered was spectacular and exceeded expectations,” says Howe. “The results are a testament to the dedication and creativity of our artists, and the strength of our pipeline in managing photoreal creature animation; complex, interactive lighting and look development. It’s a big step forward for RSP.”