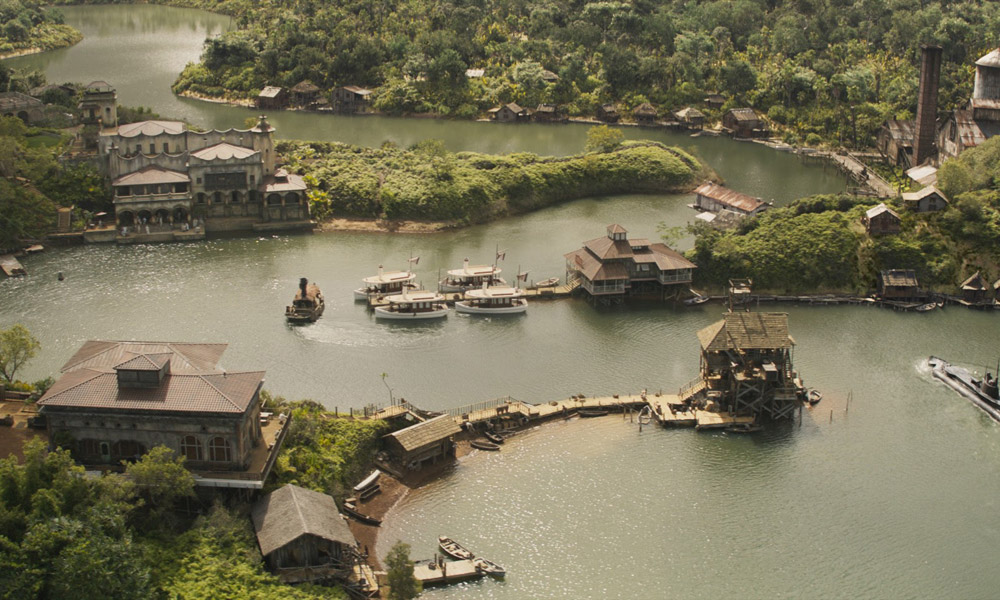 Loosely based on the popular Disney theme park ride, Jungle Cruise packs in the CGI thrills as Frank and Lily encounter innumerable dangers and supernatural forces with mankind’s fate hanging in the balance. The film is directed by Jaume Collet-Serra and the all-star cast includes Edgar Ramirez, Jack Whitehall, Jesse Plemons and Paul Giamatti.

RSP, which previously collaborated with Disney on its 2019 release Dumbo, was brought onto Jungle Cruise for its creative leadership and technical prowess, with proven expertise in creating realistic natural environments and complex effects.

Operating under the direction of production VFX Supervisor Jim Berney and VFX Producer Marla Henshaw, RSP devoted nearly a year to the project with much of its effort centered on complex rainforest environments.

“The amazon differs from other rainforests in the world and has very specific and iconic species. It was important to get all the details right,” said RSP VFX Supervisor Malte Sarnes. “The color of the Amazon river is very distinctive. The water had to appear brown, but not dirty to reflect its organic nature. We also produced more than 200 varieties of trees and distributed them in a procedural way across the landscape in a manner consistent with how they occur in real life. Our widest shot includes more than 10 million trees, bushes and other species.”

Matching the denseness and natural variety of the rainforest across both wide and close shots was extremely challenging. RSP studied the jungle’s terrain, flora and wildlife, and designed individual shots to match the diversity of the real world.

“Production provided us with excellent reference footage and we then conducted further research,” said CG Supervisor Jamie MacDougall. “It was essential to identify native plant species and also which are the most common. The rainforest is, of course, overgrown and so trees are often covered by other things. In some shots, the camera is quite close to the forest, and so we had to break away from instance-type repetition and do all the dressing with bespoke detail.”

After the studio’s 3D team did the heavy lifting of building the environments, compositors applied finishing touches that almost imperceptibly cement the aura of realism.

“We added light reflecting off the water, bugs flying around and dew glistening on leaves. You really feel like you are in a hot, muggy environment,” said compositing supervisor Phil Prates. “In the opening shot, where we’re flying through the jungle, light beams poke through the dense foliage to let you know that, up above, it’s a sunny day.”

RSP’s most demanding sequence follows the boat as it travels a stretch of river toward a rundown trading post. For that scene, the studio created the river and all jungle backgrounds in CG, it also produced extensions for the practical set representing the Port town. Additionally, it placed the boat, which was shot practically on a blue screen stage, into the river and animated it as it heads through the locations in the different sequences.

“We began by creating a layout of the river and the jungle in order to choreograph its journey,” noted Sarnes. “It needed to match the narrative of the story, but it also had to travel down the river in a logical manner, reacting to the current and leaving foam and wake based on its travel speed.”

As the river boat nears the port town, a submarine arrives on the scene and fires a torpedo in its direction. The boat narrowly escapes, but the torpedo continues racing through the water until it explodes into the town, destroying it. Only a small portion of the town was practical, most is a digital extension.

“We added a rubber factory and a big wooden structure that gets blown apart when the torpedo hits,” said MacDougall. “There’s also a floating shed that is struck by a boat and smashed, along with other structures and props. So, the scene required heavy effects simulations. Everything had to explode realistically and interact naturally with the water with ripples and swirls. It’s beautiful stuff.”

Similar to the town, the submarine was a practical element that was digitally enhanced. RSP extended the size of the craft that was shot on set and added detail. “The sub was captured in a tank,” explained Prates. “It was shot with pumps to create water flow but not as much as you’d expect from a submarine operating in the Amazon. So, we added stock and CG elements to enhance the energy and drama.”

RSP’s task list also included a macabre scene involving a reptilian character connected to Frank’s past agreeing to a nefarious proposition. Although the scene has an obviously supernatural quality — they look and behave in an uncomfortably realistic manner. “We gathered a lot of referential material about snake movement and body types,” said CG supervisor Ryan Kirby. “We wanted to get the right sense of the way their muscles roll and bodies articulate in this unnatural situation.”

Having the snakes react and understand the actor’s dialogue whilst remaining snake-like required finesse. “We set to work early on to block the animation in shots to match the dialogue, which had been previously recorded,” explained Kirby. “We needed to convey that the python was understanding and agreeing to the actor, but not in a cartoonish way. It was all about getting the right flavor … injecting character while keeping it grounded in reality.”

More than 100 artists were involved in the project from RSP. Over the months of production, the studio remained in almost daily contact with Jim Berney and Marla Henshaw, especially early on when looks and narrative elements were being established.

“It was exciting to work with Disney’s production team from the design phase, through to production and delivery,” said VFX producer Corinne Teng. “We were tasked with a large body of work that needed considerable creative input. You don’t always get opportunities like that and our team worked together to deliver the film-maker’s vision.”