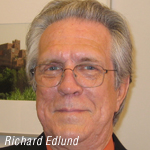 According to Variety, Edlund is teaming up on the project with WhoDoo EFX visual effects supervisor Helena Packer and Deborah Peters of GPI, maker of the PRO camera stabilizing system.

The facility looks to take advantage of rebates in Louisiana at time when work is getting hard to come by for visual effects firms in California. If a production opens a company in Louisiana and pays us through that, once they reach $300,000, they get 30 percent back,” Edlund told the trade.

DuMonde likely will provide such services as visual-effects supervision, 3D matte painting, compositing and on-set coordination of visual effects. It also looks to attract mentors from Hollywood and students from nearby film schools such as Ringling in Florida.

Edlund worked as a cameraman for a fledgling ILM on the original Star Wars. He also worked for ILM on such films as Raiders of the Lost Ark and formed his own company, Boss Films, which survived until 1997.