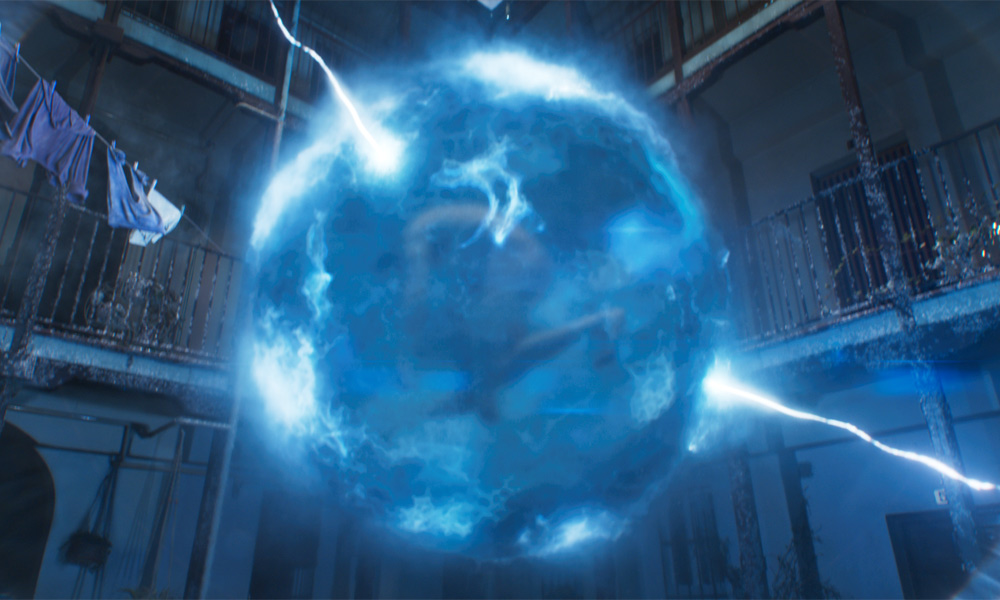 Thirty-five years ago, a time travel tale about a malevolent AI trying to eliminate the leader of the human resistance by sending a cyborg to assassinate his mother launched the blockbuster career of James Cameron (Avatar) and made an action icon out of Arnold Schwarzenegger. This month, Cameron returns to the franchise as a producer, partnered with Tim Miller (Deadpool) for Terminator: Dark Fate — which ignores the previous three installments.

AI is still trying to eradicate humanity in the future; however, its creator is no longer Cyberdyne but a corporation known as Legion. Even though an emphasis was placed on capturing practical elements in camera, digital augmentation had an instrumental role in the storytelling with production visual effects supervisor Eric Barba (Oblivion) overseeing the creation of 1,900 shots produced by ILM, Scanline VFX, Digital Domain, Blur Studio, Weta Digital, UPP, Method Studios and Rebellion VFX.

Dealing with highly advanced robotic antagonists is not unfamiliar territory for ILM VFX supervisor Jeff White (Aquaman), who is a veteran of the Transformers franchise. “What was fascinating about this was paying homage to the original Terminator and some of the incredible effects but also doing something new with the Rev-9, like the liquid metal could separate from the endoskeleton to become two characters that could work in tandem; it opened up a lot of fun possibilities.” 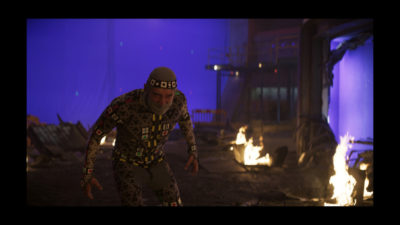 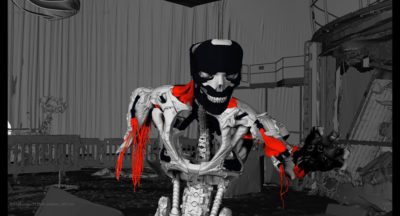 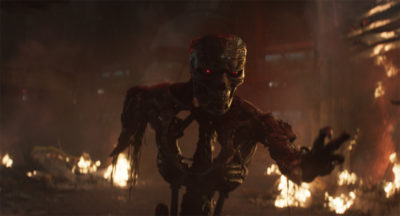 Originally, ILM was going to be the sole vendor, but the increased workload meant that other visual effects companies needed to be brought onto the project. “We had sequences that were intercut between vendors, so it was important to make sure not only there was great continuity from shot to shot but there was consistency in the language of the effects, especially with liquid metal effects. A system was set up where we could create damage in one shot, give that to Digital Domain which would run from there, and then pass that back to us.”

Everything was previsualized in detail. “For some of the complicated sequences, like the air battle where you have this fight happening as two planes are crashing into each other and plummeting down towards the earth, some fantastic previs came from The Third Floor and we did some postvis work here,” explains White. “All of that was put together with schematics that indicated, ‘In this shot they’re at that height and tipping from right to left.’ It had to be completely mapped out, otherwise you quickly get lost in the sequences.” A gigantic rotating C-5 Galaxy gimbal set was constructed by SFX Supervisor Neil Corbould (Gravity). “They did some incredible stuff during the principal photography in order to get all of the zero gravity moments working and to map exactly how the plane would rotate through the various parts of the action sequence.”

“Extensive work went into detailing the C-5 Galaxy and mapping what damage happens across the sequence that motivates the plane changing pitch or altitude,” states White. “When the KC-10 comes in and rips a huge hole out of the side of the C-5 Galaxy that damage we had to carry on for the interior shots with Digital Domain as well.” Video reference of engines on fire and exploding were found on YouTube, which helped to ground the effect. “By and large the animation was kept grounded, but Tim is still great about making sure that the cameras are dynamic enough to make it feel like a great action sequence. The other interesting thing about the exterior was coming up with the right nighttime photography. Tim didn’t want bright and super lit clouds, but to keep it dark. We came up with this fun schematic where we kept a number of the running and landing lights turned on the planes, and then used the lighting from the two planes spilling onto each other to shape the lighting and bring the characters out.” 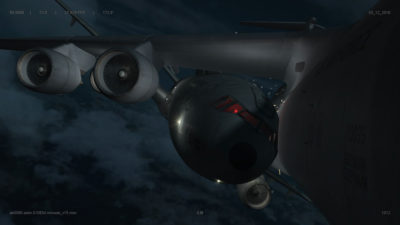 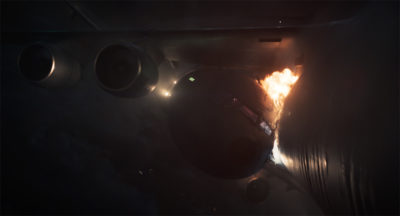 Critical to get right was transforming the live-action Gabriel Luna into various forms of the Rev-9. “There’s a sequence where he is inside driving a truck and separates from the endoskeleton and moves out onto the hood so that the liquid metal part of him can jump forward and attack while the endoskeleton continues to drive,” remarks White. “A lot of the work that we did there and also at the end of that sequence on the freeway was coming up with an interesting language for the liquid metal so that it created a cool negative space and wasn’t just a big round soft blob. The liquid metal had a lot of detail in the way it formed … The ‘dolphins swimming’ refers to a specific effect where the Rev-9 has taken significant damage and the liquid metal needs to reform on the ground. Tim liked this idea where you see these bumps come out of the liquid metal and move forward. It gives a nice sense of movement and intelligence to the liquid metal, rather than being a sliding puddle.” 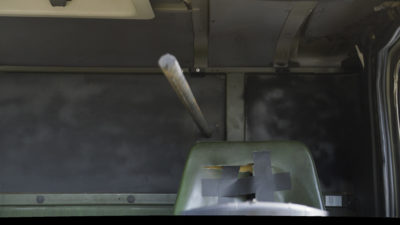 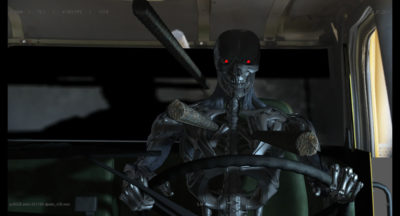 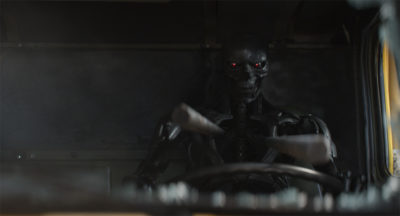 Custom solve tools were written to overcome the technical challenges, such as reforming the eyes and hair of the Rev-9 out of the liquid metal. “A complex pipeline was created that involved multiple departments,” notes White. “One of the most complicated things that we did was Gabriel getting sliced by a chain during the fight in the turbine room at the end of the film. You have an animated character and cloth simulation getting sliced in half. Knowing that we would probably be adjusting the animation to the very last second on that, an entire procedural system was set up where we could make last minute modifications, especially to the facial performance, and still pushed all of that through to the effects team to be able to slice in half and see the liquid metal interior.” 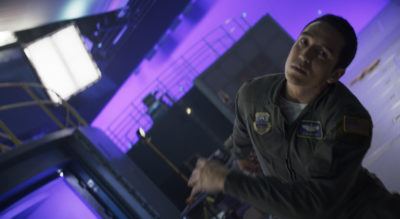 Some of the most difficult work was the de-aging of the T-800 (Arnold Schwarzenegger), Sarah Connor (Linda Hamilton) and John Connor (Ed Furlong) for a sequence that happens immediately after Terminator 2: Judgement Day, which was released in 1991.

“The Anyma [performance capture system developed by Disney Research] performances were huge,” notes White. “We had ICT scans to drive the textures on the characters and had all of the techniques in terms of skin simulation, blood flow and pores changing throughout the scene so there was realistic movement to the specular highlights on the skin. A lot of time was spent on the eyes. We had body doubles in the plate but the heads were replaced. It took a tremendous amount of time to get right. Not only to make it look like a real thing and have a believable performance but to also have the likeness [to the characters in Terminator 2].” 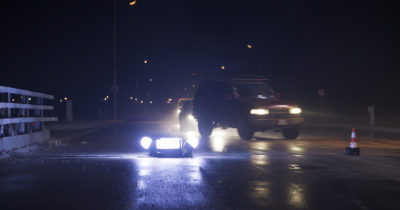 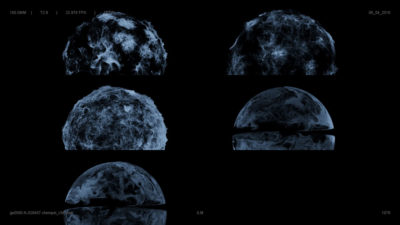 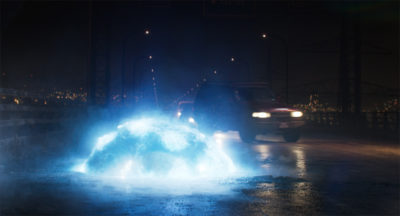 The hardest elements were the digital head replacements, the huge volume of effects, and the development of the liquid metal. “The Rev-9 liquid metal was the most complicated simulation because it’s not just, ‘Push the button and see what this gives me.’ It was art directed at every step of the way.” White concludes, “There are many sequences that I can’t wait for people to see on the big screen! The variety of work that we had to do for this film was by far the biggest challenge plus honoring the legacy of the visual effects in Terminator 2 and how spectacular they were as well as bringing something new [to the franchise].”