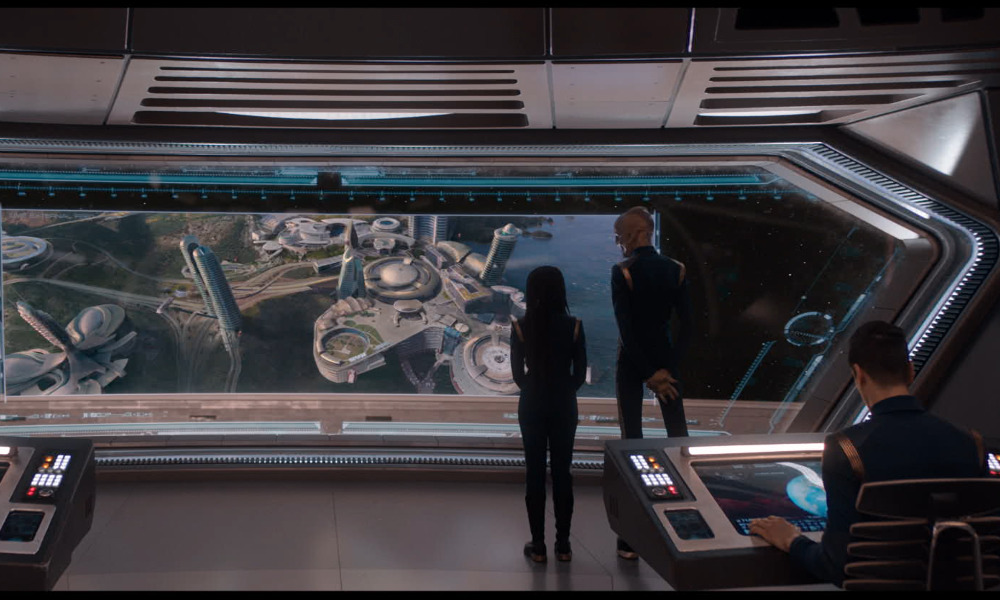 Pixomondo’s skilled team of artists across global facilities have crafted cinematic worlds for the most beloved and coveted IP. From Star Trek’s final frontier, to Master Chief’s saga in Halo, Pixomondo has delivered high-end episodic VFX under tight deadlines amidst the ongoing content boom — and to great success.

Crafting exotic planets and futuristic sci-fi environments was an essential role for Pixomondo in world-building for the Emmy Award-winning series Star Trek: Discovery. For four seasons, Pixomondo has transported audiences to the final frontier through developing cinematic worlds, under the direction of VFX Supervisor Fausto Tejeda.

“When it comes to a television pipeline, projects have very short deadlines and require quick turnaround on delivery. Tools like KitBash3D have been essential in enabling us to deliver on time and at a high-level of quality,” Tejeda shared.

Pixomondo’s scope of work on Star Trek: Discovery encompassed crafting creatures, spaceships, characters, environments and effects. For Season 2, the team was tasked with recreating an entirely new and futuristic planet from scratch and based solely on concept designs.

“We received general guidelines and concept art from the client, and we were able to use KitBash3D assets as the foundation for our environment building. The model kits have an established geometry and look that matched the concept, and we were able to further customize and build upon the assets. It was amazing to use kits from the get-go that worked flawlessly,” said Tejeda.

Similarly, for Season 3, the team developed a futuristic San Francisco to accommodate a timeline jump to 900 years in the future. Tejeda added, “We used KitBash3D’s Utopia kit as the basis of the environment, then further customized the asset and added new textures. We ended up transferring that asset with other vendors on the show, and to this day, it’s still being used not only on Star Trek: Discovery but also on Picard.”

For Season 4 of Discovery, Pixomondo began incorporating virtual production workflows and filming sequences on two in-house LED volumes. “Using KitBash3D assets allows us to lay the groundwork and do the blocking within a scene. The assets have been essential for enabling us to rapidly get iterations out in compliance. We’ll quickly kitbash a scene with massive environments, then we’ll get them up on our huge LED volume walls to gauge if the scale and distance are working. It helps us get work in front of the client as fast as possible, which is critical,” noted Tejeda.

“When we have Zoom meetings with clients, we’re also able to do quick demos or show work in Unreal Engine, then change or swap out assets in real time,” the VFX supe continued. “From there, we’ll continue to build upon the assets to reach our final desired look. It’s all about speed nowadays, and having tools like KitBash3D that we can rely on and use confidently in our pipeline is instrumental for our workflow.”

Leveraging KitBash3D assets has saved Pixomondo weeks’ worth of time that would have previously been required to build models, shaders and textures. “Having the assets as a base allowed us to focus more on the beautification of shots, such as lighting, making sure things are in direct position, layout and addressing client notes on which specific buildings need to be enhanced,” Tejeda shared. “We don’t have to worry so much about the grunt work of starting things from scratch; it’s more about making sure a shot looks aesthetically pleasing. That takes a decent amount of time too, so any little shortcut that we can take is always valuable.”

“KitBash3D’s assets come prepared for Unreal, Maya, VRay, Arnold — or whichever tool you’re using — so, it’s easy to plug-and-play and very quickly hit the ground running within several hours; whereas, previously, this would have taken days or weeks,” continued Tejeda. “We’re able to take an asset and move it through the entire pipeline, which is really important. Most of the time, although we’re building assets to put up on the LED wall, we’re going to have to reuse those assets again and again in post. For instance, if a client wants to do a wide establishing shot, we render the assets right out of Unreal, so it’s important that our assets are high enough quality for both our Unreal work and post work.”

As for the quality of KitBash3D assets, Tejeda noted, “A lot of times you buy model kits from various websites, download them and realize that they come in a bunch of triangles or geometry that’s not working. You have to spend hours after the fact cleaning something up. With KitBash3D, you know what you’re getting every single time. You know it will be clean and ready to use as soon as you download it. You know you’ll have options to use it as a hero asset or background asset, or with Unreal Engine or Maya. We know that we can rely on KitBash3D every single time.”

“Rather than spending our resources on creating one tiny building in the background that no one will even notice or see, it’s better to spend the time developing a more complex environment, instead of focusing on each individual little asset. So, having something like KitBash3D’s libraries that we know we can rely on to look good is pretty important. It doesn’t matter how much time you spend building an asset, if you don’t have the time to light or place it properly, it still won’t look great. It’s all about knowing how to use your tools to your advantage to make cinematic worlds more beautiful,” concluded Tejeda. 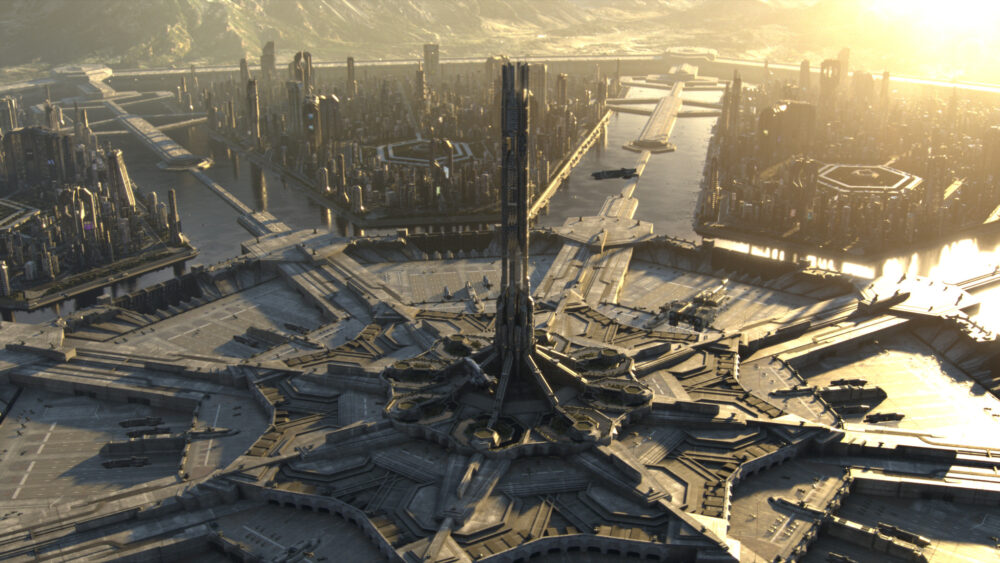 Setting the Stage for ‘Halo’ with Procedurally-Generated Environments

For Master Chief’s battle for mankind against the Covenant alien race in Halo, an epic backdrop of massive 26th-century cityscapes was central to visual storytelling. Under the direction of Head of CG Evgeny (Johny) Berbasov, Pixomondo crafted procedurally-generated environments to set the stage for the pinnacle war and reimagine the in-game universe for television audiences.

“Because the show is based on the popular and well-established game IP, fans know how the world should look and expect it to be represented in a specific way,” Berbasov pointed out. “We were responsible for building upon the concept art and designs in a way that made the fictional and futuristic environments impressive and believable, while also staying true to the lore for fans.”

To expedite production, Pixomondo leveraged KitBash3D model kit libraries as the basis and inspiration for world-building on Halo. “When we received the initial concept art for the series, we realized that there were many similarities between the overall look of the show and the offerings in various KitBash3D asset libraries. We were able to take specific buildings from KitBash3D’s libraries and transform them to align with the unique design of the Halo universe, rather than taking extra time to create models from scratch,” said Berbasov. “This laid the foundation for creating the massive 30-kilometer cityscape, allowing us to present work to the client faster than previously possible. Overall, the quality and customizability of KitBash3D assets enabled us to achieve this.” 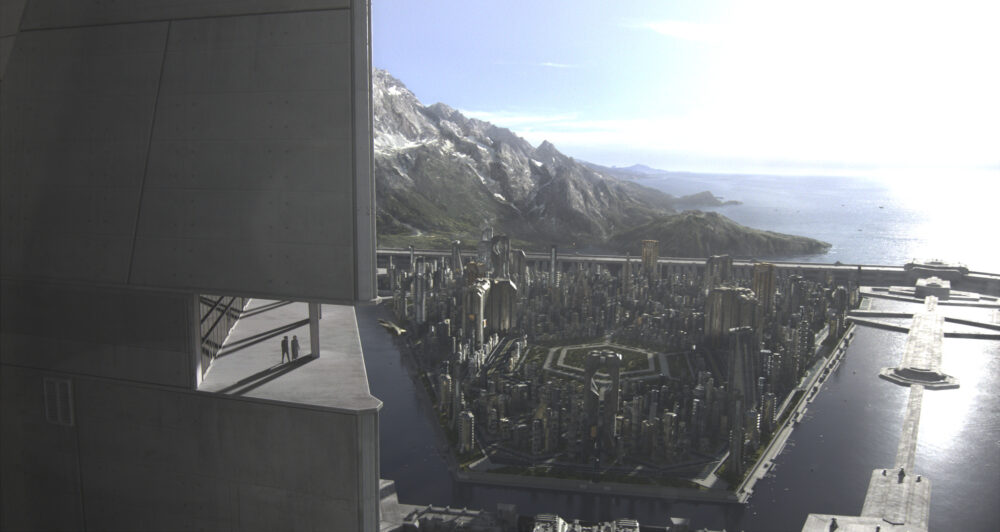 The team used Brutalist as its primary base kit, in addition to Neo Tokyo and Neo Tokyo 2. “When we’re delivering the first version of an environment to a client for review, KitBash3D model kits serve as the initial jumping off point and help save us up to 80% of the time typically required in creating assets. What used to take a week now only takes two days.”

To develop the cityscape environment, Pixomondo used a procedural world-building process to ensure that no two buildings in the series looked identical. The team created a library with multiple variations of floors, bays, roofs and GAFs that were based on the original KitBash3D model kits, but fully customized to align with the look of the Halo universe. Working in Houdini, the team procedurally combined the separate elements together to create the layouts for unique and different buildings. The map of the 30-kilometer cityscape with buildings, streets and water lines was also procedurally generated, with different elements mixed and matched to populate the massive environment.

“Ultimately, it was like multi-level kitbashing — we took the original KitBash3D model kits, disassembled and customized the different elements of each asset, then reassembled the pieces back together to create a complex, high-fidelity, and one-of-a-kind environment for the series,” Berbasov added. “We relied upon KitBash3D as a basis for the building blocks of the environment, allowing us to create faster and free up artist cycles to focus on more creative tasks.” 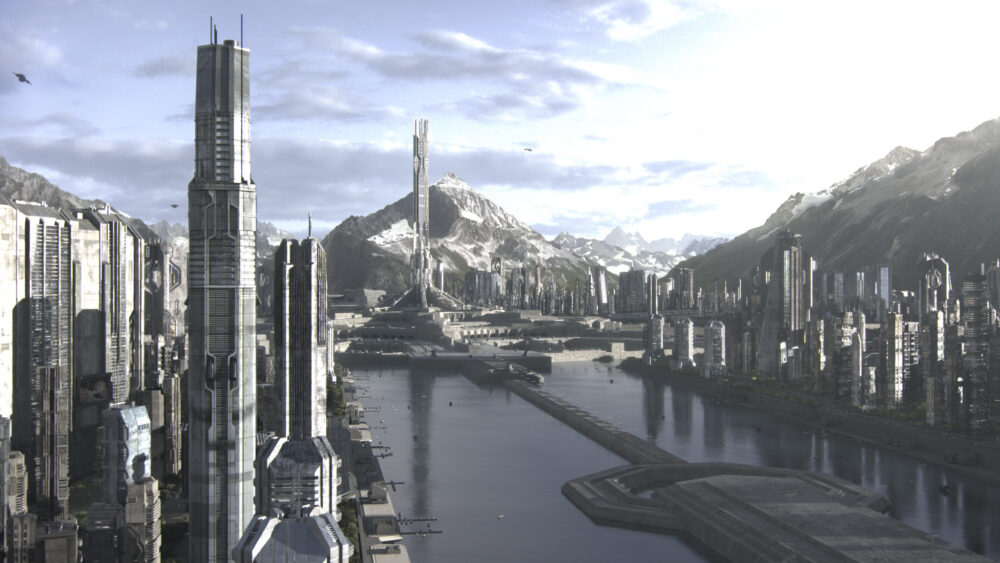 A veteran effects artist, Berbasov has witnessed the evolution of post-production pipelines throughout more than two decades of working in the industry. “Throughout my career, I’ve worked through all of the different VFX and animation departments, so I have an in-depth understanding of how the entire pipeline works and how complex and time-consuming creating assets, shots and environments can be,” he shared. “When I first got started 24 years ago, everything had to be built from scratch. Today, we’re seeing companies like KitBash3D present and popularize an ‘assetized’ mindset — one where assets are no longer being built manually and having accessible, premade, high-quality model kits as a starting point is making life easier for artists and expediting post-production workflows. This is especially critical for fast-paced production environments, like for episodic series.”

Berbasov concluded, “KitBash3D offers extensive libraries with a diverse range of assets that can be tailored to meet the demands or style of any project. The latest kits are also very clean in topology, so we don’t have to spend a lot of time cleaning it up or decoupling pieces. On fast-paced productions that require quick turnaround, we don’t have extra time to build and shade assets. We need to be able to quickly combine elements together, present it to the client, approve the cameras, light it, and deliver it as efficiently as possible. Using KitBash3D assets and working with an ‘assetized’ mindset is critical in this pursuit.”

Four seasons of Star Trek: Discovery are available to stream on Paramount+; a fifth season was ordered in January. New episodes of Halo Season 1 premiere Thursdays on Paramount+; the series has been renewed for a second season.

All imagery courtesy of Pixomondo.