Nickelodeon is reporting that its latest educational app, Bubble Guppies: Animal School Day, skyrocketed to the number-one educational app list in the U.S. and Canada and number-two paid app list domestically during its first 48 hours of release. The app, which was released on Nov. 1, brings to life a “swim-sational school day” with the Bubble Guppies, allowing kids to join Molly, Gil, Mr. Grouper and all their friends.

Co-developed by Bubble Guppies series creators, Johnny Belt and Robert Scull and curriculum specialists, and tested by focus groups, the app teaches about animals and allows kids to take part in a day of play at school. Through a series of interactive games, kids will learn about animal diet, animal habitats and animal attributes- what penguins like to eat, where baby giraffes live, and what zebras and clownfish have in common.

In addition to playing through an entire Animal School Day, kids can choose to play one of the four rich and replayable educational games on their own. After every game, kids earn a reward sticker or a toy for Bubble Puppy. They can then visit and decorate Bubble Puppy’s doghouse to see and interact with their rewards.

Bubble Guppies is created and executive-produced by Jonny Belt and Robert Scull and co-executive produced by Janice Burgess, the Emmy Award-winning team behind the hit Nickelodeon series’ The Backyardigans and Little Bill. In each episode of Bubble Guppies, the characters lead the learning process, discovering something of interest on their way to school and exploring that theme from a variety of angles. 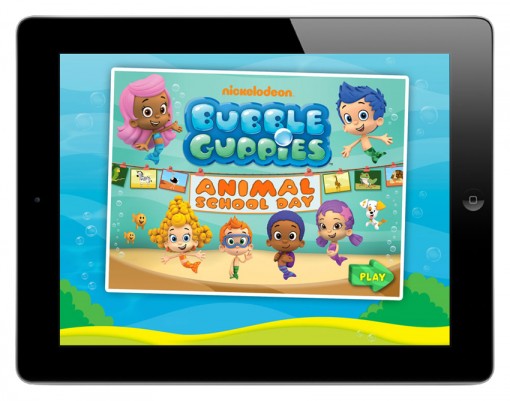