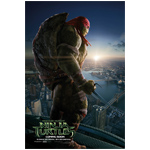 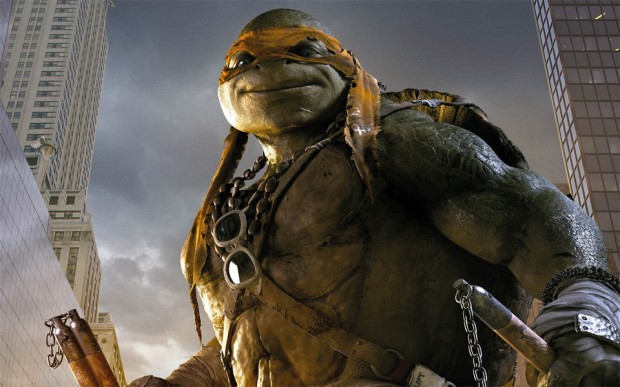 ILM mashes up motion-capture and animation in new ways to live up to the mix of comedy and thrills that define Teenage Mutant Ninja Turtles.

It always was the least likely of success stories: A self-published black-and-white comic book about pizza-loving, sewer-dwelling ninja warriors who happened to be turtles becomes a huge franchise in animation, toys and live-action movies that’s going strong 30 years on.

But that is exactly what happened with the Teenage Mutant Ninja Turtles, who this summer post another milestone in their long career with a live-action feature film out Aug. 8 from Paramount that features, for the first time, all-CG versions of Michelangelo, Leonardo, Raphael and Donatello.

Directing the film is Jonathan Liebesman, a South African-born filmmaker whose previous credits include such effects-heavy titles as Battle: Los Angeles and Wrath of the Titans. Taking on the TMNT involves more than just using visual effects to blow things up — even with Michael Bay on the project as executive producer — as no fewer than six lead characters need to be totally CG characters capable of making laugh as easily as gasp with daring deeds of heroism.

Getting that kind of performance out of digital characters was far and away the most complicated and challenging part of working on this movie, says ILM’s Pablo Helman, production visual-effects supervisor on the film.

The Heart of the Matter

But to get the nuances needed to make the Turtles not just amazing but also funny required some serious technical upgrades in ILM’s motion-capture techniques.

“The challenge here is it is an action-adventure-comedy, and so to do those comedy bits we had four actors — really funny actors — ad-libbing a lot of stuff,” says Helman. “Some of these very comedic situations came out of different performances, so we had to be able to edit the data and bring in one line from this take, another line from this other take, a look from another take.”

“The whole premise of this system was we were going to be able to edit those performances because we needed to reinterpret this scientifically gotten data into something that was appealing and that was telling the story that we wanted to tell with the character.” — Pablo Helman, ILM, production visual-effects supervisor

That decision resulted in something akin to a huge science experiment that resulted in a new system ILM calls Muse, Helman says. “The whole premise of this system was we were going to be able to edit those performances because we needed to reinterpret this scientifically gotten data into something that was appealing and that was telling the story that we wanted to tell with the character,” he says.

There were reasons for including the motion-capture data instead of key-frame animating the Turtles from the start. “You get the timing right and you get the attitude and basically the tone of the performance is there,” says Helman. “And then after that is interpreting this data so that you’re being true to the character you want to portray.”

Liebesman says directing actors in such circumstances was fairly normal. “It’s exactly the same as directing normal actors because you have the actors on stage,” he says. “I think the challenge is there are new possibilities … (such as) making sure you are shooting a little wider than you think you need to because sometimes an animator can add something that isn’t possible or wasn’t possible on set.”

Animation ended up being the essential secret ingredient needed to turn that raw data into characters that were believable and true to their long history, says ILM associate animation supervisor Kevin Martel.

“Even though the (captured) movement is 100 percent real, it just might not look appealing on the turtle face,” he says. “And it can be something as simple as a smile and trying to dissect what it is that makes a smile look one way on an actor and something different on the turtle.”

Doing this with comedy is even more difficult, especially since mentioning animation and comedy in the same sentence inevitably brings up the work of Chuck Jones and Tex Avery.

“This is not that,” says Martel. “These guys have to feel like they are living, breathing creatures in this world. So it became about micro-subtle looks and shifts. The amount that you can do with an eye dart is pretty incredible; it can communicate so much if its timed and done right. So that was definitely a goal of ours on this was to get the comedy to come through.”

Animators had a wide range of controls at their fingertips via Muse they could use to adjust the data as subtly as possible. “We can just boost things and move them around and just sort of re-fit it onto the turtle face,” Martel says. That retains the spirit of the actor’s performance while also making it look the way it needs to on the Turtles’ anatomy to convey emotion.

Starting with the Data

Additionally, facial capture gave the animators a strong base to work with that included the most subtle and unconscious of facial movements that also fit exactly with the dialog the actors were performing. “From a performance standpoint, there was a lot of stuff for us to feed off of,” says Martel.

With data coming from not just multiple takes, but also body motion-capture, facial motion-capture and key-frame animation, the ability to edit was essential to making the movie work. “If we didn’t have that system, it would have been impossible for us to do the project,” says Helman.

Designing a look for the characters that worked in a live-action CG movie was another major challenge, Helman says. “There’s always a reason why a design works or doesn’t work so you always want to go back to the origin of how these Turtles were created and the truth is that these are comic book characters,” he says.

Two-dimensional drawings — whether in a comic book or on a storyboard — work by different rules. “There are a lot of things when you’re storyboarding that you don’t really need to resolve,” Helman says. “If a turtle is delivering a line, it’s basically a bubble of words drawn on the screen, but there’s nothing of the mechanics of how we get there.”

ILM started with very raw designs from Aaron McBride that incorporated as much of the Turtles’ mythology as possible. Those incorporated each character’s personality into the designs of the characters, which when combined with other traits such as dialog, the actors playing them on set and the contributions of animators, made them believable and distinct characters.

Each Turtle also had physical elements and personality traits to set them apart. Donatallo is the tall and slender brainy gadget guy; Leonardo is the archetypal leader, like a high school quarterback; Michelangelo is the skater-surfer type, always cracking jokes; and Raphael is the street-smart tough guy, Martel says.

Much of the basic personality for the performances came from the actors, helping the animators to keep each performance distinct, Martel says.

In addition to the Turtles, there were two other CG characters: Splinter, the man-size rat who serves as the Turtles’ sensei and mentor; and Shredder, their armored, blade-wielding arch enemy.

“We wanted to get some little bits of rat movement in (Splinter), which we hadn’t really seen in the previous Ninja Turtles films,” says Martel. “So we thought it would be interesting to get just from time to time either a little ear twitch or a little scratch in there. It reminds you what he is and who is, which is nice because you stat to just accept him as this wise older man and then you’re reminded he’s a rat. It’s a neat little head trip.”

Shredder, on the other hand, was not dissimilar to the work ILM did on Iron Man. “It was mainly about having him walk and fight in a way that it was somehow believable with that kind of weight he’s got on him in terms of the armor,” says Helman. “And the eyes were completely minimized we didn’t want to see or deal with the eyes so they are basically a blank socket.”

Martel says it helped that Liebesman was familiar with the effects and animation processes. “He can really break down a shot and he understands each separate stage of shot building, which was fantastic,” says Martel. “When we’re presenting animation, he knows that he’s just looking at the performance and the movement and he doesn’t get sidetracked by details that he knows will come later.”

Digital environments included recreations of Times Square in New York City, where the final battle unfolds atop the Condé Nast building; and the Turtles’ lair, which was the setting for several sequences.

But the film’s foundation remains the four lead characters, whose performances represent a big step forward for digital characters.

“They’re on screen for 48 minutes of the film, which is pretty wild,” says Martel. “They have some of the longest scenes I can remember working on in my 17 years at ILM — they just have these long scenes with four Turtles talking and no cut. It’s amazing to be able to sustain that level of performance.”

SIGGRAPH 2014: Vancouver, BC
‘Turtles’ Gives ‘Guardians’ a Shell of a Time