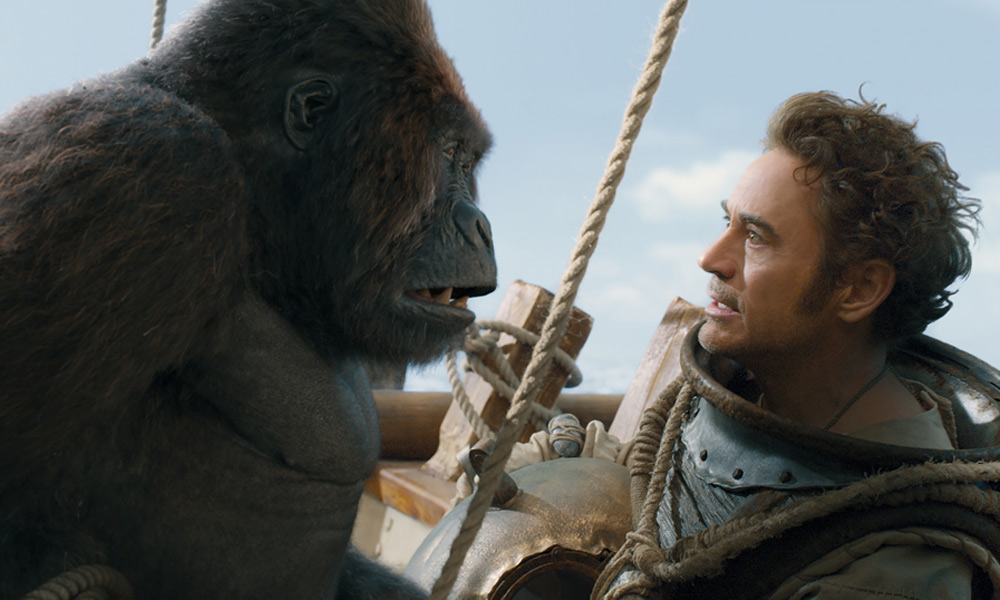 Two-time Oscar-winning VFX supervisor John Dykstra shares some of the details of bringing the good doctor’s adventures to life.

It seems that every generation deserves its own adaptation of Hugh Lofting’s popular children’s classic The Story of Dr. Dolittle. This year, Robert Downey, Jr. follows in the footsteps of Rex Harrison and Eddie Murphy in a new version of the story, which finds the doc and his animal companions embarking on a journey to find a cure for the ailing Queen Victoria. Legendary visual effects supervisor John Dykstra (Ghost in the Shell) and filmmaker Jonathan Liebesman (Wrath of the Titans) were brought in to provide additional photography and digital effects to expand upon the vision of director Stephen Gaghan (Syriana).

Of course, Dykstra, the winner of two VFX Oscars for his work on the original Star Wars (1977) and Spider-Man 2 (2004) and nominated for Star Trek: The Motion Picture, Stuart Little and Spider-Man, is no stranger to creating a cast of CG creatures. “The animals were smaller,” laughs Dykstra when comparing Dolittle to Godzilla (2014). “They didn’t take-up nearly as many film cans!”

Discussing the prevalence of CG creatures in movies and television shows, Dykstra says, “It all comes back to whether or not the story you’re telling is compelling and whether or not the characters are evocative,” he points out. “All of the things that have transpired in regards to making animals more photorealistic have opened up a whole new realm of storytelling. This is similar to how the advent of conventional digital effects allowed us to do explosions, massive groups of people and nonhuman characters that had an anthropomorphic quality to them in sci-fi movies and shows.”

Dykstra further explains that he dealt with Liebesman directly on this movie. “David Shirk [Ready Player One], the animation supervisor on the project, was the one who had to bridge the transition from Stephen Gaghan to Jonathan Liebesman, as he was on the project from the beginning,” he recalls. “I joined Dolittle after Jonathan had completed additional photography. There were a huge number of shots that needed to be completed within a fairly short period of time and the staff was overwhelmed. I came in as someone who could organize and triage the work that needed to be given the most attention.”

This wasn’t the first time that Dykstra had been recruited to revisit the postproduction process. “There is no way to make sure that anything works, including making a film from the beginning,” he explains. “It comes down to the relationship you create with the others who are collaborating on the project. You have to find your way. It’s the same as making the film whole again in the sense that there are several inputs in regards to what image should be when it’s finally on the screen. The job of the people who supervise and the director is to take those ideas and coalesce them into something that is greater than the sum of its parts, otherwise, you end up with five different movies!”

In a movie about a doctor that communicates easily with his animal friends, integrating CG characters into the live-action photography was the major challenge. “The key to it once you establish what the story is going to be is figuring out how to integrate the CG creatures in a way that is realistic but don’t call extraordinary attention to themselves, which is tough,” notes Dykstra. “One of the hardest things on this project were the talking animals. There was a huge effort that goes into making these nonhuman characters anthropomorphic in a way that doesn’t look cartoony and gives them a sense of reality. We have a talking ostrich, bear and even a dragonfly.”

The voice cast of Tom Holland, Rami Malek, Emma Thompson, Ralph Fiennes, Octavia Spencer and Marion Cotillard influenced the animation style. “The animator takes the emotional content portrayed in the audio and figures out how to convey it in the character,” says Dykstra. “We didn’t use any motion capture.”

Stuffies to the Rescue

Stuffies, which are little mannequins that can be held and put on a stick for eyeline purposes, were used for the parrot and some of the smaller animals. “In the case of animals that interacted with the live actors, there were performers in green costumes,” says Dykstra. “When coming into contact with the actors, they displaced their clothes or hair or moved them in some way. There was real interaction, so the actor was not having to mime. Then, the animal was animated over the top of the stand-in. There were minor changes to the physical make-up of some of the animals, like the way the fur was groomed or the amount of fur they had. For the most part, the characters were accurate representations of real animals with the exception of the dragon.”

According to Dykstra, the ease of conveying emotion varied from creature to creature. “With a gorilla you have a face that is anthropomorphic and the familiarity that we have with the human face was critical,” he remarks. “A small change in facial expression resulted in a much larger emotional impact. Whereas dragonflies don’t have mouths per se and their eyes are disproportionately large: They don’t look anthropomorphic at all so were less realistically animated, but an effort was made to maintain the way that they fly. We did different things with the camera in regards to depth of field to establish their scale. You want to believe that this bug can talk. You have to find the balance between the stylization that you have to do to make it have emotional context and the realism that you’re pursuing in the execution of the image.”

Some environments took on more significant roles after the additional photography was completed. “We had more scenes on the boat than they had started out with,” reveals Dykstra. “The cave also took on its own personality based on the change of intent of what went on there. We did a ton of production design to bring these elements into this world so there was a certain amount of fanciful addition to the environments.”

Dykstra says one of the director’s favorite effects were the specular reflections on the water. “It’s totally reasonable to have specular reflections on the water, but we put a lot of them in because he liked the personality it created in terms of what the picture felt like,” says Dykstra. “The same thing applies to the colors on the animals in regards to their fur and in the execution of the environments in which the animals perform. We had to make sure that things remained colorful and lively looking.”

Another interesting tidbit: the film’s underwater sequence was photographed dry for wet. “Robert Downey, Jr. was shot against bluescreen on a dry stage and then his head was added into the CG diver suit and helmet,” says the VFX supe. “Everything else underwater was CG.”

MPC and Framestore served as the film’s main visual effects vendors, with Luma Pictures and Lola VFX added later to assist with additional postproduction work. Interestingly enough, the renowned de-aging techniques of Lola VFX came in handy. “The shooting took place over a long period of time and one of the actors was going through puberty,” recalls Dykstra.

The creatures were created as high-resolution models that could withstand extreme close-ups. “The work that MPC and Framestore did on the creation of each of their respective animals was great. When you’re looking at the dragonfly, it’s macrophotography because they’re so small. Suddenly, you’re looking at detail that you would never see with the naked eye. The specifics of how accurately and realistically these characters were modelled and animated was a big challenge.”

Executing the cave environment and creating the dragon also proved to be technically challenging for the VFX team. “There was no paradigm for that,” notes Dykstra. “We were making it up. The cave had bioluminescence in it and a light effect was part of the dragon. Distinguishing between the dragon and cave light effects was particularly hard. This dragon is different in a sense that there is much more integration of bioluminescence. She has a light effect that is inherent in her physicality and echoes her state of mind and anger and pain.”

When asked about some of the highlights, Dykstra says, “In terms of sequences in the film that are exceptional, we did some photography of interaction between ants, Dr. Dolittle and the dragonfly; that’s really fun because it’s in that realm of macrophotography.”

Universal’s Dolittle is currently playing in theaters worldwide. The movie, which reportedly cost $175 million to make, was number two at the box office this weekend, with a $21,950,000 opening weekend in the U.S. and a $56,800,000 total worldwide. 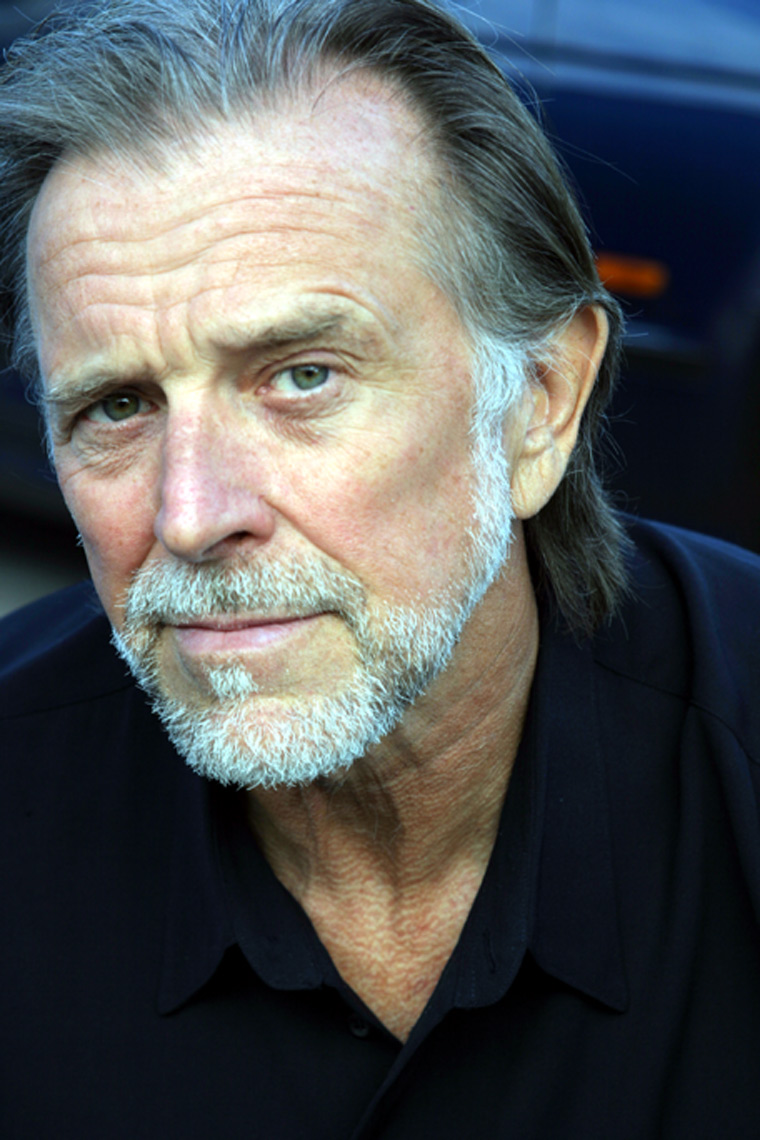 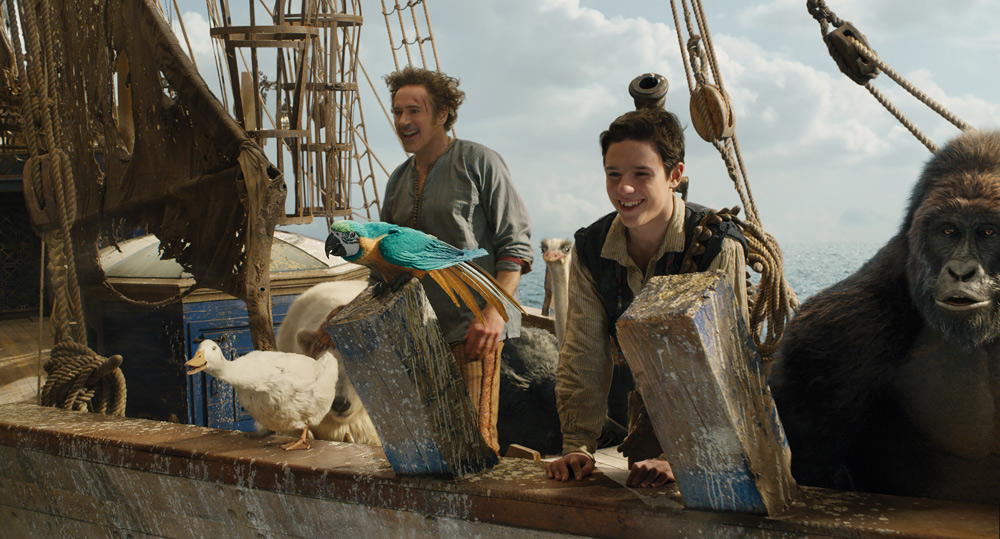 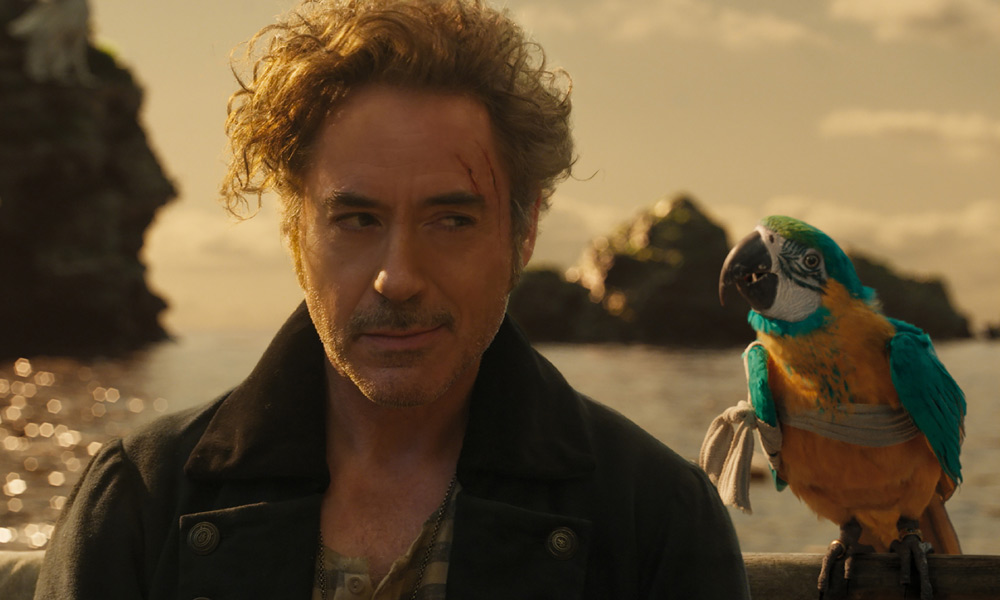 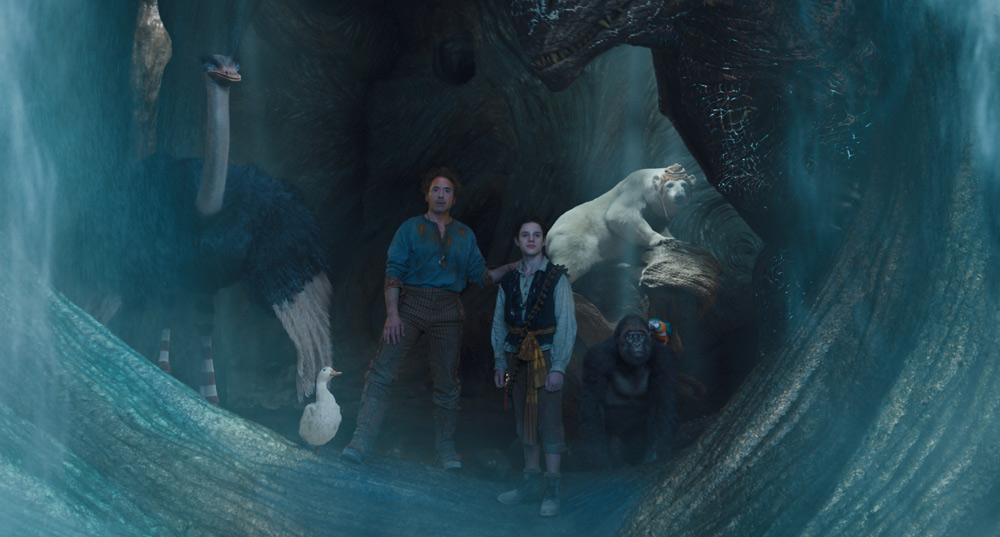