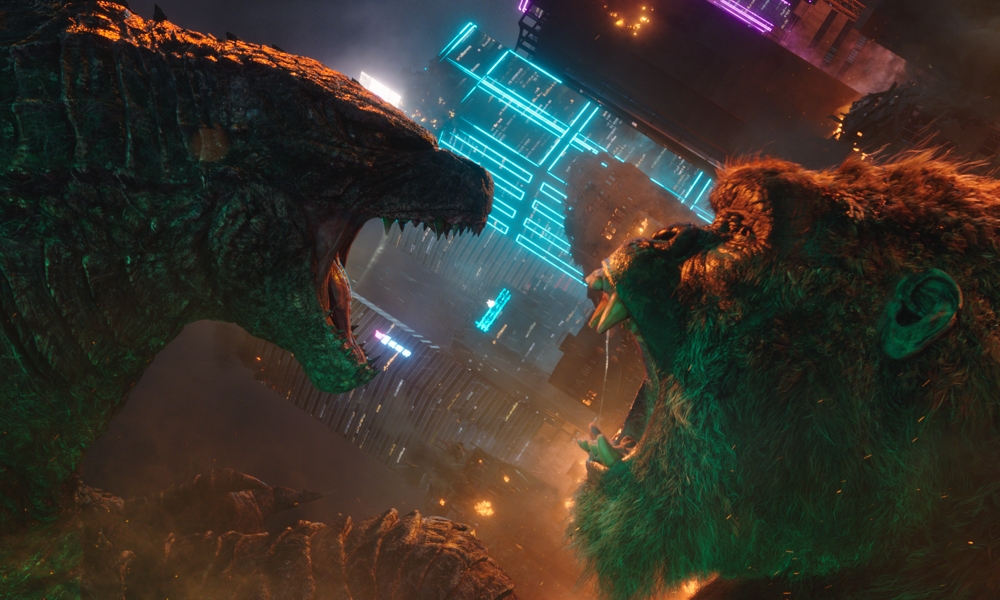 The creative team based at Technicolor’s Preproduction studio in Culver City, Los Angeles worked on all fronts of the visualization process for the Hong Kong sequence, from previsualization through to postvisualization. The team worked closely with director Adam Wingard while traveling from Vancouver, on location in Hawaii, Australia and back to the studio in Los Angeles. Previsualization supervisor Kyle Robinson led the charge with his team of asset builders and sequence artists. “With the guidance and leadership of VFX supervisor DJ Desjardin, the MPC team and I were able to help bring this film to exciting building smashing life,” Robinson stated.

In the preliminary stages, MPC Film were delivered concept art of King Kong and Godzilla towering amongst the pink, cyan and orange city lights of Hong Kong, saturated in a blue haze. Famous for its vibrant night-time scenes of neon signage, laser shows and enormous LED screens, it was important to encompass an authentic representation of Hong Kong’s cityscape.

A primary focus for MPC Film’s team was to re-create the specific lighting concept. Numerous conversations were in motion with Wingard throughout the process regarding the color scheme of the city’s neon lighting. Additionally, it was important to demonstrate the scale of Kong and Godzilla, along with the realism of the CG city.

As well as developing the dynamic depiction of Hong Kong, the team ensured these striking colors accurately lit the characters throughout the fast paced and highly destructive clash. What starts as a hazed and colorful low key set is artfully pummeled into a fiery hell-scape.

The introduction of a new proprietary software tool named Populate HK (Hong Kong) technology was created for Godzilla vs. Kong. This was a script, based on PACS, built by MPC Film CG supervisor Joan Panis to help push the main environment build of the city into all shots. Populate HK meant that any updates that were undertaken in the main environment build, could be easily integrated into new shots. This included reading any changes made to shots by the animation team. Populate HK would read the base environment and the amended animation and prepare the city for render. The script also held the capabilities to ensure that the shots were populated based on what sections of the city were visible, making them less heavy to render.

The “Downtown Battle” was a particularly challenging sequence as the majority of shots were full CG and included a great deal of complex destruction FX. Continuity across the sequence was a key focus to assure that previously destroyed buildings remained in their fragmented appearance, as well as the shattered neon lights flickering among the mass destruction.

CG supervisor Timucin Ozger created an automated Houdini destruction workflow scene, which could also render the outputs with Neons as the light sources in Mantra Renderer. This workflow created similar outputs to those the Lighting department would render. This helped to avoid surprises of different looks between departments and keep consistency. MPC also upgraded their Parallax Shader to make the skyscrapers look photorealistic. The new shader could merge windows into the offices and create Parallax Rooms that actually looked like offices, not limited to single rooms.

The animation team’s main challenge was to create a fierce and dynamic battle which not only emphasized the scale of the titans, but also showed the emotion of the fight in their faces. The animators had fun acting out the battle and choreographing how Kong and Godzilla might fight, and then reinterpreting that performance into the key-frame animation. An additional challenge was to create a loving and non-threatening interaction between Kong and Jia, despite Kong’s monstrous size and intimidating appearance. It was essential to get the perfect emotion and expression on Kong’s face to sell his feelings without words.