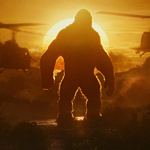 Kong: Skull Island pulls out all the digital stops in recreating an updated version of the original monster movie.

Unlike a group of explorers and soldiers surveying an unchartered island filled with monsters, Senior Visual Effects Supervisor Stephen Rosenbaum (Avatar) and Visual Effects Supervisor Jeff White (Transformers: Age of Extinction) were well-aware of the presence of a giant ape when collaborating with filmmaker Jordan Vogt-Roberts (The Kings of Summer) on Kong: Skull Island.

“The thing that we were the most worried about was honoring the incredible film legacy of King Kong,” says  White. “We wanted to make sure that this iteration did something new but at the same time was a nod back to the original 1933 incarnation.”

A significant departure was going from the traditional primate, which spends most of its time on all fours, to one that is bipedal. “Production Designer Stefan Dechant had already done a tremendous amount of Kong’s design,” says White. “Kong was going back to being a movie monster, not just an oversized gorilla. We also had ILM Art Director Aaron McBride iterate on the design, which was then moved into modeling. Usually, you want to get everything solved in 2D before spending the time in 3D, but for this particular character it was important to start in 3D and to figure out how much a long or wide lens affected the shape of the space. That work was done by Krishnamurti Costa (ILM Lead Creature Modeler) and was a key part of getting the Kong design over the line. But as soon as fur was put on, the model completely changed. It covered up so much of the anatomy and altered all of the key action lines that we had to go back and make sure that the fur worked with the design.”

Another challenge was conveying the scale of Kong. “It was real challenge because he’s never in a city environment,” says White. “One of the things that helped tremendously was that Kong spends so much time in the water between his battle with the squid and the fight at the end of the movie. The fact that he is splashing around in five feet of water provides a visual cue that enables you to understand the size of these creatures.”

Creating simulations was a major issue, such as having fur interact with water. “Kong’s hand or foot would be hitting the water at 50 to 60 miles per hour and our first pass simulations would essentially be a wall of white water covering the two characters, which doesn’t make for interesting shots,” White says. “We spent a lot of time directing and carving away the water simulations so we always left the characters somewhat clear but never in a nonphysical way. We put birds into the shot as well as a lot of debris and mud in his hair with the goal of making sure that the audience understands that Kong is a 100 foot tall.”

A new monster serves as the main adversary for Kong. “Jordan had a solid idea of what he was looking for the Skull Crawlers, but we did do several modifications as we got into production,” says White. “We were constantly posing the big Skull Crawler together with Kong to make sure that it felt like a worthy adversary. ILM Animation Supervisor Scott Benza spent a tremendous amount of time trying to figure out how a snake-like creature with arms would move. It was important to Jordan that the Skull Crawlers moved in a weird way that didn’t feel too awkward. The Skull Crawlers had to be able to do interesting fight moves and in particular, utilize its tail as an advantage against Kong. There are almost some judo-like throw moves the Skull Crawler does with Kong that Scott came up with, which I thought were fantastic.”

Fire has a big role to play in the action-adventure. “There is a sequence where Preston Packard (Samuel L. Jackson) lures Kong to this lake, and then sets the whole thing on fire,” says White. “It was inspired by some of the napalm imagery from the Vietnam War. A manmade lake was built in Hawaii so that we could shoot the foreground and Packard. Special Effects Supervisor Michael Meinardus put flame bars all over the lake and created a substantial amount of fire. We ended up needing to grow the fire quite a bit in order for it to feel big enough to stop a 100-foot tall creature. However, we wouldn’t have been able to get it to look as good without that practical effects component there.”

Real Huey helicopters were rotoscoped out of footage shot in Hawaii and placed over the background plates captured in Vietnam for an aerial scene that harkens back to Apocalypse Now. “It’s tough because by the time you’re down to a sun ball exposure, everything in the foreground is generally a black outline,” White says. “It was a lot of work to find the right balance to keep those helicopters looking real.”

The movie called for an otherworldly feel for Skull Island and the initial storm the explorers fly through. “It was done by a combination of our generalists, effects and animation teams,” says White. “Jordan let us push color to interesting directions. For example, some of the lightning is almost pinkish purple. It was good because so much of the movie is this orange warm sunset and green feel.”

Not all of the atmospherics were intentional. “We had about three weeks straight of no sun in Vietnam but rather than that being a deterrent to the project it was something we embraced as this moody stormy dark weather patterns that you would get on Skull Island,” he says.

A large vegetation library was produced to assist with the integration of the CG creatures with the live-action plates. “We were always leaving room for them to have some impact on the environment whether it’s knocking a tree over or having rocks break off of a cliff when they land,” says White.

“The squid sequence was one of the most difficult that we did on the film,” says White. “The Davy Jones-style squid has tentacles and suckers moving over Kong’s hair, which had to be simulated together along with all of the water. It took us several months to put together a close-up shot of Kong chewing on a few tentacles because of all of the interplay that was involved.”

The climatic battle needs to be seen on the big screen. “I’m excited for people to see the final fight between Kong and the Skull Crawler,” says White. “It’s incredibly unique, and the fact that we went to this real location with everybody wearing waders and got right in the muck to do the shoot adds a lot of texture to the scene and helped to keep it looking authentic.”