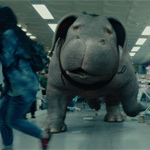 Okja, a new Netflix original feature about a young girl named Mija who risks everything to keep a strange creature safe from corporate interests, has been causing a stir with viewers and critics since launching this month. Developed and produced by Plan B, Lewis Pictures and Kate Street Picture Company, the feature centers on a pig-like creature that is roughly 12 feet long, eight feet tall and weighs 12,000 lbs. —  a full CG creation by Deluxe’s Method Studios.

Method VFX supervisor and Academy Award winner Erik-Jan de Boer collaborated with director Bong Joon Ho from the early stages of productions, refining the look for Okja, developing a highly detailed asset that would seamlessly integrate with practical footage and overseeing shots on set in South Korea, New York and Vancouver. DP Darius Khondji shot the film using ALEXA 65 cameras at 6.5K, which was down-rezzed to 4K. Method delivered more than 35 minutes of footage, with an average shot length of nine seconds.

Okja’s creation began with a small maquette shipped from Korea, which the Method team scanned and optimized for its pipeline. Small adjustments — the number of toes, size of the ears, shape of the feet and jowls, bits of fuzz and hair — were made to the design, with the studio then focusing on R&D for a new solution for skin and muscle. This development allowed for faster simulation and more art-directable results.

“Realizing Bong’s vision for Okja was inherently challenging because of her size. She is enormous and features prominently in shots, and we didn’t want to restrict the actors so we had to prepare for there to be a lot of contact with her on set. Also, since this is a story about love and friendship, naturally Mija would need to interact closely with Okja. We aimed to make Okja a realistic presence on set and really focused on making the young actress playing Mija comfortable even though her primary costar is an inanimate foam shape. Bong was very generous in allowing us to rehearse and prepare with Mija and gave us a lot of autonomy in how we approached scenes,” said de Boer.

Animation supervisor Stephen Clee joined de Boer on set, using a wide range of foam pieces that were 3D printed from Method’s models, glued into accurate representations of the creature’s shape. Clee puppeteered the stuffy, giving the human actors an eye-line and realistic prop to interact with. The stuffy was also important for casting shadows to create an appropriate sense of presence. For a sequence where Mija (Ahn Seo-hyun) rides Okja, de Boer put the young actress on a huge, custom-made Okja pogo stick, providing the correct physics and more realistic hang time and bounce.

“Being on set was hugely beneficial to the success of this project,” de Boer said. “Standing next to Bong, we could discuss our strategy and take risks we wouldn’t have been able to otherwise. Once we came back to Method and saw what had been captured, we hit the ground running. We had intricate shots with upwards of five people touching Okja at once that we had to legitimize, shots where Okja is in frame for a full minute, and many shots with Mija hugging Okja, allowing time to scrutinize every contact point and shadow. This required lots of roto, paint, rotomation and animation with an incredibly high fidelity. We definitely pushed our craft to a new level.”

Method’s workload for Okja also included scenes where the animal swims, bumps into cars, crashes into a storefront and falls into (full CG) vegetation; plus extensive crowd work for a feed yard scene with more than 16,000 pigs.