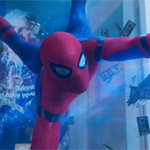 As praise for Sony’s Spider-Man: Homecoming rolls in, the contributing VFX studios are stepping forward to share the secrets to their incredible CG feats. Award-winning creative studio Luma was tapped by director Jon Watts and VFX supervisor Janek Sirrs to deliver 11 stunning sequences for the Marvel movie, which opened at No. 1 in early July and has totted up nearly $650 million worldwide thus far.

Luma was responsible for key sequences featuring the film’s standout, relatable villain: The Vulture, a regular, street-level guy who turns to crime in order to take care of his family (played by Michael Keaton). The pieces Luma delivered required creating and animating a CG wing-suit that radiated an imposing presence and could match Spidey’s speedy moves.

In the beginning of the film, “Adrian Toomes” builds his alien technology empire after being fired from his previous blue-collar job. Eight years later, his guns are bigger and badder, he’s grown greedier and his mechanical wing-suit is the size of a small airplane. He makes his first grand entrance into the lab via a door in the ceiling, spreads his wings and swoops onto his platform in a hard landing with the smug boast, “business is good!”

The scene required a full CG Vulture and landing platform with articulated arms. Luma used Vulture’s geometry from two other vendors on the show and incorporated that into their pipeline. “We were aiming to tie the suit and the warehouse into the same world to make it feel industrial and real, but also not as refined of a suit as Iron Man’s. The mood and contrasting raw metals of the wings helped bring Vulture’s suit into the same world as the set,” said CG supervisor Andrew Zink.

To bring the man and his machine to life was a complicated task for the animators. Vulture is a dynamic tank that hovers over the ground, and his two turbines are controlled by exoskeleton arms which act as the sole propulsors, so the amount of RPMs and the angles in which they lean create a push and pull effect. Animators also had to consider his unique wing shape, flight trajectory and predatory poses to perfect his flight and fast landing.

“This is definitely the proudest I’ve been of the crew that I work with. The passion and hard work they put into this film really shows the kind of talented people we have at Luma and how much care about the artistry of their work they have,” said VFX supervisor Brendan Seals.

A rookie Spider-Man discovers Vulture’s henchmen selling alien technology to a wanted criminal and chases after their van as he runs through backyards, unapologetically destroying everything in his path (the scene is a parody of the famous Ferris Bueller’s Day Off “The Race Home”). Vulture saves his henchmen by violently swooping in and grabbing Spidey like a real vulture would snag its prey. Vulture then rapidly ascends into the sky at a whopping 208 mph before dropping his catch into a lake.

To create this completely virtual sequence, “animators began blocking with simplistic Google Maps photography and drone photography to work out the aesthetics of what the surroundings would look like,” according to VFX supervisor Kevin Souls.

For Vulture’s character, animators tackled the challenge of animating the hefty wing-suit that, while also making sure it was dynamic enough to fight with a swift and speedy Spider-Man. “We like to ground our characters in real world physics, so our animators use a variety of Luma created tools to track speed, gravity and archs—it’s easier to bend the rules once you understand them,” explained animation supervisor Raphael A. Pimentel.

Luma also worked on the first big battle between Vulture and Spider-Man, when the young hero interrupts Vulture stealing supplies from the Damage Control truck. Initially tasked with enhancing the sequence, Luma realized early on that it would be easier to recreate the sequence in full CG in order to add camera moves and to work with the portal (the alien technology that allows Vulture to travel through the roof of the truck). Since this was a close-up and constrained fight, animators had to ensure that Spider-Man looked weighty and in control, while also ensuring that the Vulture build was dynamic enough to fight with him.

On top of creating a believable CG supervillain, Luma’s scope of work included creating and animating a full CG Spider-Man for various sequences, the disintegration effect on a henchman character, the ATM sequence, and the “Crime Fighting” sequence where a rookie Spider-Man head outs into the city attempting to stop petty crime.

Luma is currently working on Marvel’s Black Panther, Thor: Ragnarok and Disney’s A Wrinkle in Time. Learn more at www.lumapictures.com.