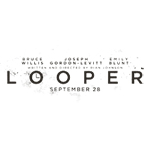 We sat down with Rian Johnson, the director of the time-travel film Looper, to discuss his use of visual effects in the movie and their importance to the science fiction genre. The film, which stars Bruce Willis, Joseph Gordon-Levitt and Emily Blunt, opens in theaters nationwide on Friday (September 28).

Animag: How much of a role did visual effects play in Looper?

Rian Johnson: Looper was definitely the biggest scale I’ve ever engaged effects on. It was the first time that, rather than just augmenting little things, we were actually creating environments. There’s a sequence at the end of the movie that is probably the most extensive use of digital animation we have in the whole film, where it’s out in a sugar cane field and all these particles start floating. That was entirely digital. It was the first time I had really engaged with CG on that level.

With Brick and The Brothers Bloom, effects didn’t seem as important, but with a science fiction film, you must have had to come up with a clear approach to VFX.

Johnson: All of my favorite filmmakers who use effects really well, like Christopher Nolan and Guillermo del Toro, approach each effects shot with a plan, usually with a very smart combination of practical and digital effects. And so that’s what I tried to do here. For instance, with the exception of all that cane floating at the end of the movie, anytime anything else floats in the movie—small objects, furniture, or people—I was very insistent that we put them on strings and then just do wire removal. Even if we were going to end up putting a CG object in after the fact, I didn’t want that to be our only option.

Joseph Gordon-Levitt was made to look like a young Bruce Willis entirely through makeup. But were there any instances where you applied CG to an actor?

Johnson: There’s a sequence when Old Seth [played by Frank Brennan] starts disappearing piece by piece. And that was a combination of practical effects and a lot of digital effects. There’s one point where the character’s nose vanishes and there’s just a hole. Obviously, there’s no way to do that with makeup. But actors with older faces are a little bit easier to do in CG because their skin is less translucent and they tend to wear a little bit more makeup.

You’ve mentioned wanting to create a film reminiscent of the science fiction movies you watched growing up. That kind of skin density recalls the practical creature effects of the 1970s and 1980s.

Johnson: It’s an interesting thing. It’s counterintuitive. In a way, we’re pushing it more fake to look more real. But for me, especially when I saw the first stuff they were throwing at me, it might have been technically more accurate in terms of how translucent skin is, but it looked digital. I pushed for it to look like a real object that might be makeup, rather than something slightly uncanny.

What are some of the science fiction movies you watched and what features contributed to their believability?

Johnson: Well, the sci-fi worlds I feel are most successful are those that are in some way recognizable and grounded. The one that pops to mind immediately is the first Alien film where, once you adjust to being on the spaceship, you suddenly feel like you’re in an industrial environment that is oddly grounded and familiar. It’s built out of stuff that you recognize. Stars Wars is another great example. Less in terms of being recognizable and more in terms of it feeling very lived in and familiar. There’s something about that world—for instance, the farm that Luke grows up on—that’s very tactile. It contrasts with the absolutely gorgeous digital environments they created for the prequels. Those tended to be much more shiny, kind of glossy candy worlds that were right for that story because it’s set in a different period.

Looper also deals with two different timeframes—the futures of 2042 and 2072. How did you go about distinguishing them from each other?

Johnson: Well, one big advantage we had was the opportunity to go to Shanghai to shoot the far-future stuff. Just being in a different city and a different environment changed the canvas and helped differentiate the far future. Design-wise, we spent most of our time the near-future world. For that, I just laid out the marching orders that we were going to make everything very, very grounded.

Could you talk about the VFX team you assembled?

Johnson: Our effects supervisor was Karen Goulekas, who is incredibly talented. And then we contracted a bunch of effects houses. We had a company in China called Base FX, which ended up doing a lot of the comps, rotos, sugar cane cloning, and wire removals. Incessant Rain in Nepal also did a lot of comps and wire removals. And Pixel Magic came in a little later and helped with comps and sky replacement. Atomic Fiction in Northern California did the majority of our digital matte paintings and most of the cityscape extensions. Hydraulx, based in Los Angeles, did a lot of the Old Seth stuff. And then we had a company out of Munich called Scanline that did that sequence out in the field, with all the stuff floating in the air. Those poor guys were staring at clumps of dirt and bits of grass for months and months while we, back in LA, would look at the shots and say things like, “OK, that clump still looks a little CG, let’s adjust the texture on that. That blade of grass looks a little funky, let’s make it move differently.”

What did you learn about VFX, working with such a diverse group of artists?

Johnson: I came into this process with a cynical eye toward CG and I came out of it with so much respect for the digital artists we worked with and so much respect for what can be accomplished with CG. I feel like I may be a convert to its glories. It’s just a matter of disciplining yourself and using it wisely and using it properly. I hope to do it on even a bigger scale next time. 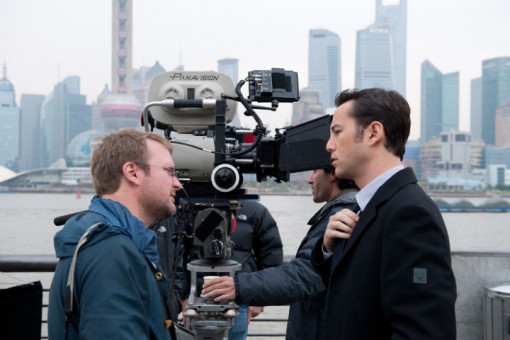 Writer-director Rian Johnson and Joseph Gordon-Levitt (Joe), made up to look like a younger Bruce Willis (Old Joe), on location in Shanghai. Photo by Alan Markfield. Courtesy of Sony Pictures. Copyright © 2011 – Looper, LLC

Jake Gerli is a writer and editor who recently relocated from San Francisco to Nashville, where he sometimes feels like he is living 30 years in the past.