Waititi returns with Thor: Love and Thunder, which ups the ante of action mayhem. In an effort to prevent the systematic murder of deities by a former worshipper, the Norse God of Thunder reteams with an ex-girlfriend. The cast of Chris Hemsworth, Natalie Portman, Christian Bale, Tessa Thompson, Russell Crowe, Jamie Alexander, Chris Pratt, Dave Bautista, Karen Gillan and Waititi himself was supported by Marvel Studios’ VFX supervisor Jake Morrison, who has been involved with MCU franchise ever since the original solo outing.

Overall, 25 vendors situated in Italy, U.K., Canada, United States, Australia and New Zealand were responsible for producing 2200 visual effects shots. “You could say that the sun never sets on the Thor: Love and Thunder empire,” says Morrison. “You couldn’t go and see everybody [because of the pandemic], but it felt like a far more personal experience to do the whole thing through Zoom. For example, when saying our goodbyes and thank yous to Method Studios, it was heart-wrenching as we had over 300 people on Zoom. My take on the whole thing is I try to make sure the experience is as personal as possible so the notes go all the way down. If you want to be able to convince people that it’s worth the work to actually stay [for a couple of extra hours] and make the shots better, the personal side of it becomes more important.”

Retaining Logic Within the Madness

Morrison points out that even the film’s outrageous scenes, like giant goats pulling a flying Asgardian boat, had to be grounded with a sense of logic. “I’m a big fan of superhero mechanics,” admits Morrison. “What I don’t want is a movie where the rules don’t make any sense. I thought, ‘What if we put Stormbreaker, which we know can summon Bifrost, front and center?’ We established that the boats can fly earlier when we see the Asgard tourist scenes. We hook up the goats in the front because we need a powerful force of compulsion. We get this mad spectacle of this beam of Bifrost creating a physical surface for the goats to run on and you have sprays of Bifrost crystal kicking off of their impacts. Why don’t we have Bifrost Bridge left behind everywhere all of the time? I’ll tell you why: The keel of the boat is lower than the Bifrost bridge and carves through it.”

Along with having to deal with the reappearance of Jane Foster (Natalie Portman), Thor has to come to terms with his ex-girlfriend forging an intimate relationship with his former hammer, Mjølnir. “The great thing about Taika’s comedy is that it’s relatable,” notes Morrison. “Korg obviously serves as a foil for all of that when he says, ‘Bro, it must be hard to see your ex-girlfriend with your ex-hammer getting on so well.’ It’s the thing your friend would say that would just destroy you!” 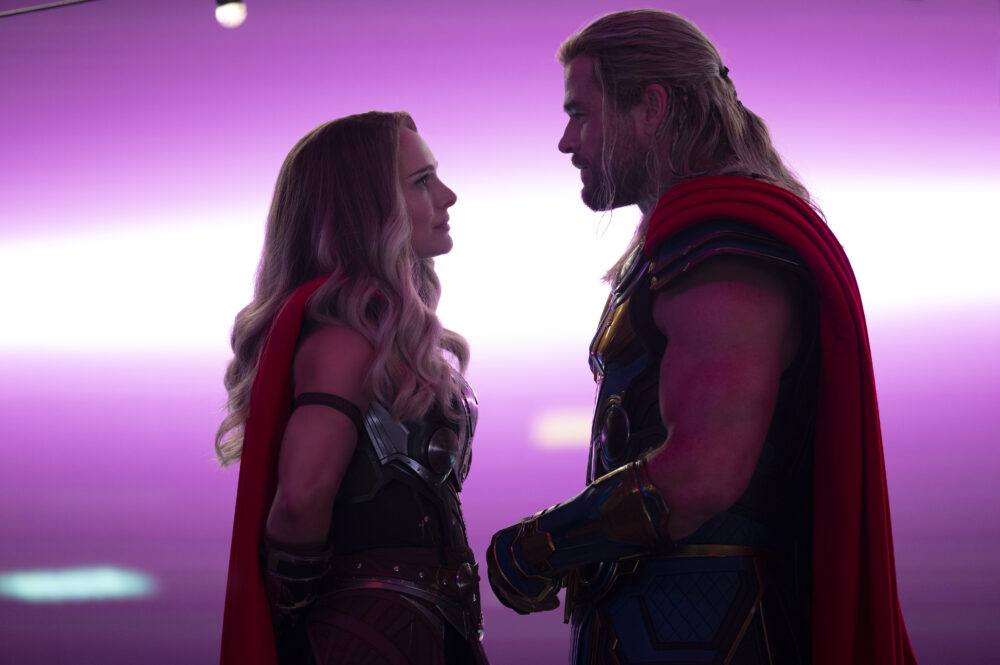 The most amount of time went into animating the arrival of Thor’s jealous axe Stormbreaker during the New Asgard town meeting. “I’ve animated a lot of things over the years and this is probably the least expression that I’ve been given to work with, because what does an axe do? It floats and turns menacing, which means you’ve got two things to play with: speed and turning ratio. Occasionally we put lightning in, such as when Thor has Zeus’s Thunderbolt and goes, ‘This is the army! It’s sleek and beautiful.’ Then you look outside and Stormbreaker is causing the whole boat to pitch up and down.”

In Thor: Ragnarok, Hela shattered the Mjølnir which has a dramatic payoff in Thor: Love and Thunder when Jane Foster transforms into The Mighty Thor as she can assemble and disassemble the hammer at will.

“There are a lot of hammer-related gags that you can do, and at a certain point there aren’t,” observes Morrison. “This was a new lease on life for me in terms of visual storytelling. During the New Asgard battle, Thor fires the hammer and the audience is expecting to see a full Mjölnir hammer strike like we have seen in all of the other pictures — but then there is a frontal shot where the whole thing breaks apart and each of the individual pieces turn into hunter and seeker missiles and go through and — Pop! Pop! Pop! — kill all of the shadow creatures that the Asgardians are fighting.”

“The trouble is you can’t stop there,” he adds. “Every single battle you have to do different gags. You get cool beats like on the Moon of Shame when Thor fires out all of the hammer pieces and that last one is a spikey bit that you could use as a dagger that she shoves into the shadow creature’s head, all of the pieces come back and explode its brain. That’s fun!”

A disillusioned worshipper known as Gorr the God Butcher serves as the antagonist and gradually physically deteriorates due to his relationship with the Necrosword. “At the beginning we were going to have him be fully CG at a certain point,” reveals Morrison. “We did LightStage scans with Christian Bale and had a lot of different development work where whole chunks of his face were missing and you could see the necrosis taking place.”

However, with Gorr being so much in the picture, the CG approach was decided to be too risky when it came to retaining the performance of Bale. “We gradually steered back towards a 100 percent prosthetic solution with the teeth and scars,” says the supervisor.

One of the film’s dramatic scenes involves the sidekick rock creature Korg getting killed by Zeus’s Thunderbolt. “Korg is like a technical animation exercise. It’s hard to make him look like a bunch of rocks that are moving as a coherent person but never squashing and stretching.”

As for groundbreaking visual effects, Morrison singles out the Moon of Shame sequence where color gives way to a black and white lunar environment. “I wanted to make a bump up on the technology used for the Valkyrie flashback in Thor: Ragnarok and try to put it in something that wasn’t slow motion,” explains Morrison. “Imagine the ability to shoot one actor doing one thing with multiple lighting passes and splitting them all out after the fact. Taika wanted us to have infinite control. We talked about magnesium flares in the air and that whole travel arc with long shadows. I ended up trying to reverse engineer a way to be able to control that because he likes to shoot continuously as well.”

Six different lighting stations were set up around the circular moon base. “Each of the individual pieces was shot with a static light,” recalls the VFX supe. “Because lighting is additive if you do it in the right color space you can literally add any light that you want as you need it. You don’t have to build a CG version of the actor and do a fake version where the skin and cloth response won’t be as good. You actually have that light. It’s a level up way of shooting an action sequence and making it feel, even for something as crazy as this, more honest. It was a huge challenge to pull all of the required ingredients together between all of the different departments, lighting, camera, editorial and of course our VFX vendors that made it all sing. To break the mold with something as innovative as this is terrifying but also exhilarating when you finally see the results.”