”Iloura played such a strong role in the design of our ghosts,” said Pete Travers, Sony’s VFX Supervisor for Ghostbusters. “From the first test in pre-production which they hit out of the park, everything Iloura produced was not only of extremely high quality, but had such a strong aspect of creative design, in ways that we hadn’t asked or expressed. They went the extra mile, and it always paid off from our vantage point. Glenn and his team made it easy on us, defining the look of our ghostly beings like Gertrude, the Rock Concert Ghost and the Mirror Ghouls.”

For “Gertrude,” a live-action/CG hybrid (sometimes full CG) who lives in the library, artists built a skeletal system, designed and added her clothes and lower body, and finished with a celestial aura. Production employed a technique of strapping the actors in LED lighting, which threw a soft light both onto the actors as well as the set, which required artists to integrate her seamlessly into the plate. They also transformed her from ethereal beauty to skeletal ectoplasm-spewing-monster.

The filmmakers envisioned the band of Mirror Ghouls as decomposed creatures recessed in a dark world, which become more defined as they approached the mirror surface in their escape attempt. Iloura artists came up with a number of looks for their appearance deeper in the mirror world, as well as creepier, more human-like forms closer to the surface; colors shifted from cool to warm as the ghouls drew nearer. For their big breakthrough, CG warping and reflective blows were added to the mirror surface, as well as practical and CG smashed glass.

Another Iloura creation was Mayhem — an all-CG ghost who inhabits a stadium venue and manifests in a heavy metal stage show. The character required a blend of ghostly translucence and realistic skin texture and hair that had to float and move as he flew through the air. A “jelly pass” internal glow was added for an otherworldly inner light on top of his skeleton and muscle system. In more complex shots, dry-ice aura and vapor effects needed to interact with the concert crowd and main actors. This sequence also required CG beams, sparks and lightning from the guns, crowd enhancements (and live plate/CG integration).

Iloura also delivered the ghost rats and the Show Ghost featured in a sequence with Bill Murray. “I knew that when Iloura said they could do something they would, and they would exceed expectations, and despite the many, many curve balls thrown their way, Iloura continued to deliver quality work,” said Sony VFX Producer Sean Santiago. “It was an absolute pleasure working with Iloura and something I hope to repeat soon and often.”

(Don’t miss our visual effects story on Ghostbusters by Bill Desowitz in the October issue of Animation Magazine — renew or subscribe today!) 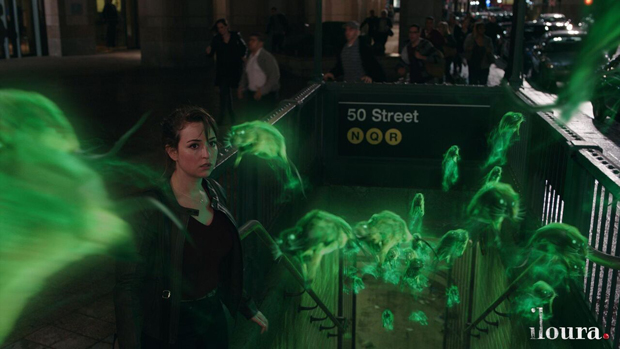 ‘We Bare Bears: Viral Video’ Out Oct. 4
Semillitas Snaps Up ‘Meteor and the Mighty Monster Trucks’