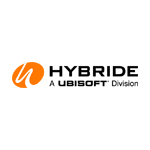 Quebec-based Hybride, a division of Ubisoft, took to alien dialects to translate the vision of local filmmaker Denis Villeneuve through visual effects in his new sci-fi drama, Arrival, out now through Paramount. As the main VFX vendor, the Hybride team led by VFX Supervisor Louis Morin crafted 245 shots for the film, making up 25 minutes of screen time, including all alien appearances.

In Arrival, adapted from Ted Chiang’s Nebula Award-winning short story Story of Your Life, 12 mysterious and massive alien spacecraft land all over Earth. An elite team of experts is assembled to investigate, entering one of the ships to make introductions with the otherworldly visitors and try to decipher their language in order to learn their intentions.

In addition to handling the digital space creatures themselves, Hybride artists were tasked with designing their “logograms” — the written language used by the aliens as they attempt to communicate with the humans. Working with concept art from the production team, Hybride developed the transition effects for the logograms, delivering a total of 70 such shots.

Another key role played by the Hybride VFX crew was look development and animation of the obfuscating fog within the craft, for which realistic interaction with the aliens was critical.

“We are extremely proud of our participation on this film, which is already a huge success,” said Pierre Raymond, President and Head of Operations at Hybride. “It’s very motivating to be given a mandate where creativity is at the heart of the process. The visual effects requested for Arrival were quite ambitious and we’re especially honored by the confidence Denis Villeneuve has shown us by entrusting Hybride with key scenes in the film.”

Hybride has previously delivered VFX for Avatar, The Hunger Games, Jurassic World, Star Wars: The Force Awakens and Warcraft. The studio, now celebrating its 25th anniversary year, is currently working on The Great Wall and Luc Besson’s Valerian and the City of a Thousand Planets.