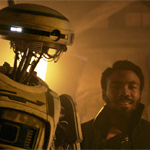 Under the supervision of Industrial Light & Magic (ILM), Hybride produced 413 spectacular and innovative visual effects shots for Solo: A Star Wars Story, released in theaters on May 25th. For Hybride, this marks a fourth foray into the Star Wars universe and Hybride’s most important contribution on the franchise so far.

“We are honored to have been chosen by ILM to take on this huge challenge; but we’re particularly proud of the work we’ve accomplished within the production calendar thanks to our team’s in-depth know-how and solid technical and administrative infrastructures that made it possible for us to meet the requirements of this large-scale project,” said Pierre Raymond, President and Head of Operations at Hybride. “It is certain that the extraordinary synergy between our teams also allowed us to rise to the challenge and really push our technical limits.”

The one-of-a-kind droid L3-37 takes on a full role as an actor in the film and greatly benefits from Phoebe Waller-Bridge’s performance, as she was specifically chosen to play this character because of her style of acting. What bemused Hybride artists the most was the fact that the actress’ performance infused “real life” into the droid. The way Waller-Bridge moved with all the quirks of a human being, added real depth to the character.

“Our main goal was to be able to retain as much of Phoebe’s performance as we could.” said Hybride VFX supervisor Joseph Kasparian. “Some shots have a lot of movement in them — crowds, people cheering behind L3, blaster shots and other ballistic effects — so for each shot, we had to recreate everything that had been hidden by the green portion of the suit, then prepare the plate to receive L3.”

The studio’s work on L3 required meticulous tracking and matchmoving by Hybride’s tracking team, otherwise the human aspect could not be reproduced or even animated at this level. The end results translate into a unique character of a disconcerting realism that seems almost human.

“On Solo, Hybride has once again proven that they have the artistic talent, technical expertise, and passion for filmmaking that ILM demands of our VFX partners adds ILM VFX Supervisor, Patrick Tubach. What’s more, they do it all with an unflagging enthusiasm and superb confidence, just like the namesake of our movie.”

Hybride’s work on Solo also includes the creation of explosion effects in several sequences, impressive 3D CG backgrounds for the mine and landing pad, massive set extensions for the Space Port and virtual characters in the scene where L3 is calling for a rebellion.

Hybride artists also contributed to the realism of the sequence where Han Solo (Alden Ehrenreich) and Chewbacca (Joonas Suotamo) meet and produced stage extensions for the scene where Han sees the Millennium Falcon for the first time. The studio also produced massive sandblasts, FX simulations and explosion enhancements for multiple sequences in the film.

You can hear more from Waller-Bridge and Donald Glover (Lando Calrissian) on their characters and their unique pilot-droid relationship in this interview with Oh My Disney.