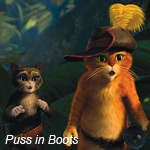 Tech giant HP has announced that DreamWorks Animation chose HP technology to push the boundaries of CG animation for its most technically advanced film to day, the Shrek spin-off Puss in Boots, which hits theaters this Friday, October 28.

Artists working on Puss in Boots used more than 200 high-performance HP Z800 Workstations for all aspects of the film’s design—from crafting the swashbuckling feline lead character to complex digital effects such as tornadoes and cloudscapes. The workstations proved their star power by coming out on the red carpet for the film’s Hollywood premier last Sunday, accompanied by Puss and Kitty Softpaws! HP has long played a key role in DreamWorks productions, including the Shrek series, How to Train Your Dragon and the Kung Fu Panda films.

“As with all our films, Puss in Boots required powerful systems to support the digital demands of our creative teams. Knowing that we have the support of our partners at HP allows us to free our artists from technical limitations, letting them focus on creating the most powerful 3-D CG experiences.” Said DWA’s chief technology officer, Ed Leonard. 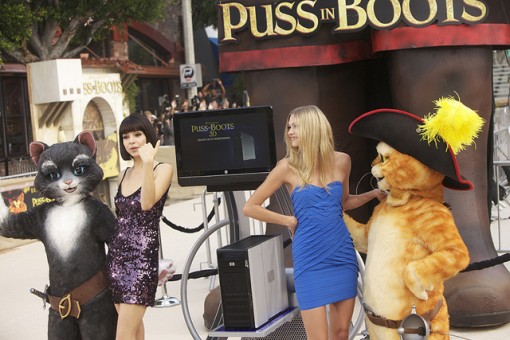 Puss in Boots on the HP Workstation Red Carpet

Industry watchers are eager to see how Puss will perform. DWA is riding high after posting third-quarter results that beat analysts’ expectations in terms of profit and revenue—largely thanks to the success of Kung Fu Panda 2 and it’s $498 million overseas box office earnings, as Hollywood Reporter noted following the Tuesday announcement.

Although its third quarter earnings were $19.7 million, down from $39.8 million, CEO Jeffrey Katzenberg was quick to point out that this was a two-film year for the company as opposed to last year’s three. During the quarter, Panda 2 earned $39.4 million in revenue. The next biggest third quarter contributor was Megamind with $25.8 million in revenue, followed by Shrek Forever After ($15 million) and How to Train Your Dragon ($9.2 million).

Katzenberg said he would consider Puss a success if it set a Halloween opening weekend record of about $33.6 million. Puss will be followed by Madagascar 3 and Rise of the Guardians in 2012, the last films under its closing Paramount distribution deal.