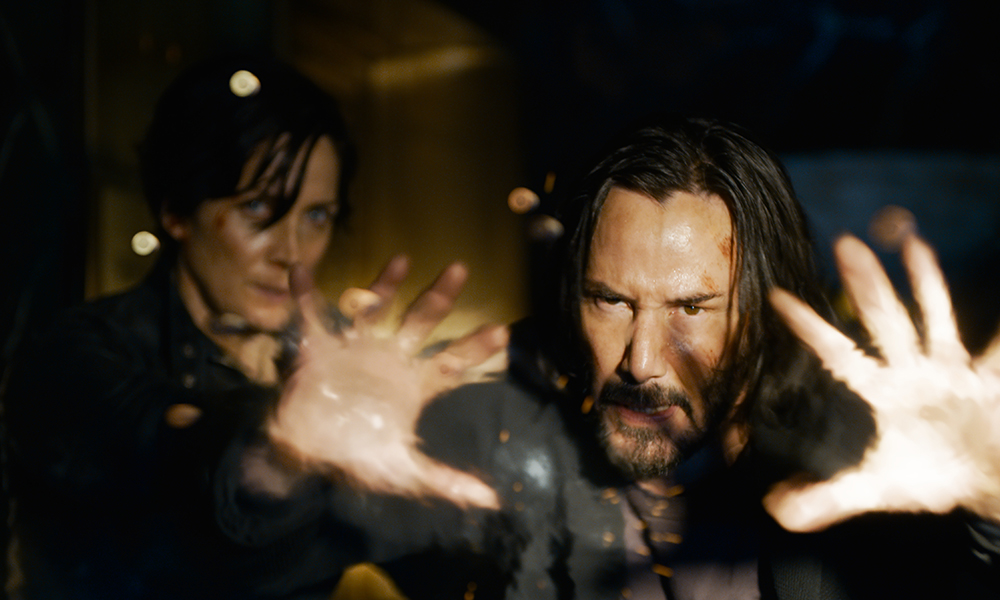 Directed by Lana Wachowski, the long-awaited next chapter in a groundbreaking franchise, The Matrix Resurrections, reunites some of the original Matrix cast, as well as welcoming some new faces. Keanu Reeves and Carrie-Anne Moss reprise their roles as Neo and Trinity, taking on a new world of challenges in the search for truth and freedom from the reality simulation.

Helping boot up this version of the movie world was Framestore, led by VFX supervisor Graham Page. The studio was tasked with honoring the first three Matrix films, while introducing fantastic new VFX elements to the table in a cohesive blend of live-action stunts and seamless CG artistry. And the demands of Resurrections keep up the pace of the franchise, culminating in a climactic third-act action sequence including a motorbike chase, human torpedoes and a death-defying helicopter standoff.

“The third act of the film typically hosts the biggest action sequences as the plot reaches its finale,” said Page. Framestore’s talented artists pulled out every trick — from digital doubles, stunts and environment work.

Although initially offered 204 shots, Framestore’s London team ultimately delivered 443 shots for the film. “There’s a legacy with The Matrix that got people really excited, they’re iconic sci-fi/action films, and everyone wants to say they’ve worked on one — to the point where a lot of artists volunteered to work on a single shot, just to be able to say they’d worked on a Matrix film,” explained the VFX supe.

“There was a heavy weight of expectation to build on and improve the VFX of the previous entries in the franchise, known for their groundbreaking digital effects,” Page noted. In some cases, Framestore used modern techniques to reference and rebuild effects from the original films, such as Neo’s shield power first seen in The Matrix Reloaded.

The transformation of Jonathan Groff’s Agent Smith is reminiscent of the earlier films featuring Hugo Weaving. “2D morphing effects were revisited using modern 3D morphing of digital characters with hair and cloth,” explained Page. “In general, the feel of the film was less stylized and more organic and realistic than the originals, meaning more detail was required in models, and work was all carried out at 4K.”

The Matrix trilogy was known for its dramatic stunt work, and the team knew fan expectations would be high for the latest installment — as Page put it, “The pressure was on … VFX has come a long way since the original Matrix in 1999, and the fans know this, so the bar for the big action sequences was set very high.”

In the third act of the film, a swarm of people chase Neo and Trinity as they speed through the streets of San Francisco on a motorcycle. This climactic sequence required the addition of a crowd of up to 100 digital characters into hundreds of shots. Framestore created fully digital humans with simulated clothing, hair and facial animation, as well as digital doubles for Neo and Trinity for the motorcycle sections that were too dangerous to capture in-camera.

“The talented Matrix team tried to do as many stunts as possible in person,” said Page, “but the swarm sequence in particular was too dangerous, and so we supplemented with VFX to blend with the shot footage and create an action-packed final shot.”

“For safety reasons, they hadn’t been able to film extras near any vehicles or the camera, so we knew our extras would be front and centre, and the movement had to be consistent with the extras they had already filmed,” added animation supervisor Max Solomon.

“We started out by analyzing the sequence and creating a detailed list of the actions we were going to need — some were generic, but many were shot-specific. We found four stunt actors of varying sizes and set up the Framestore motion capture rigs in the largest space in our London studio. We spent two days working through the list of actions, capturing every kind of variation we could think of, throwing ourselves around like kids at soft play! It was a lot of fun.”

After the motion capture, the animation team had to examine every frame of the reference footage and make their selects for clean up.

“We spent about two months with a team of six animators creating a library of performances with classic names like ‘AgitatedBystanders001,’ ‘ShotOnRoofOfCar002’ and ‘MenacingWalk003’, tidying up ground contacts, fixing joint chain pops, adding hand and finger animation, fixing scale and intersection issues,” said Solomon. “A lot of the performances were captured with all four stunt actors together, so that we could get interactions and more complex integrated movement. Meanwhile, we painted an animatic of the sequence using stills in Photoshop, showing where and how many digital extras would be added to each shot.” 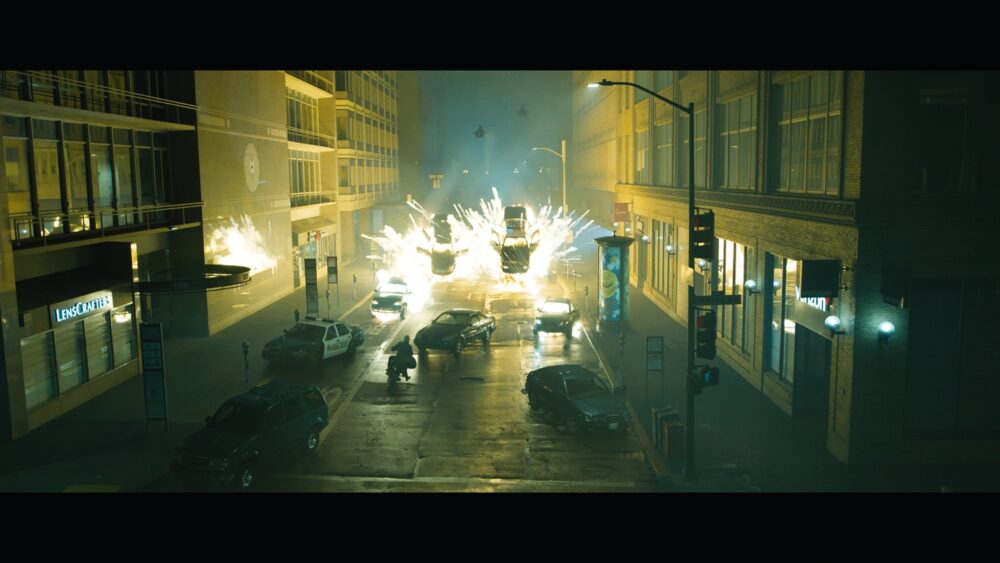 Some of the stunts were too dangerous for even motion capture, as the final shots of the swarm sequence called for people in the high rise buildings of San Francisco to hurl themselves down at Neo and Trinity.

“We started out using cutting-edge physics simulation techniques to match the impacts with the ground,” said Solomon. “By varying trajectory and dive pose, we could get different kinds of impacts. With our extensive library of clips, blocking the shots was very quick, but we found that a lot of actions didn’t work ‘off the peg’, so we started creating bespoke shot-specific animations, often shooting new reference footage ourselves, to ground the actions in reality.”

A key part of the approach to the sequences was the combination of practical filmmaking with digital effects. Real explosions were enhanced with digital debris and the CG crowd was intermingled with real-world extras and stunt performers. “The work had to be integrated into and matched to real-world photography with smoke, atmosphere, lens flares, practical debris, and fire,” continued Page. “Fortunately, it was shot pre-COVID, so director Lana Wachowski had time during the first lockdown to edit the big action sequence before production picked back up again.” 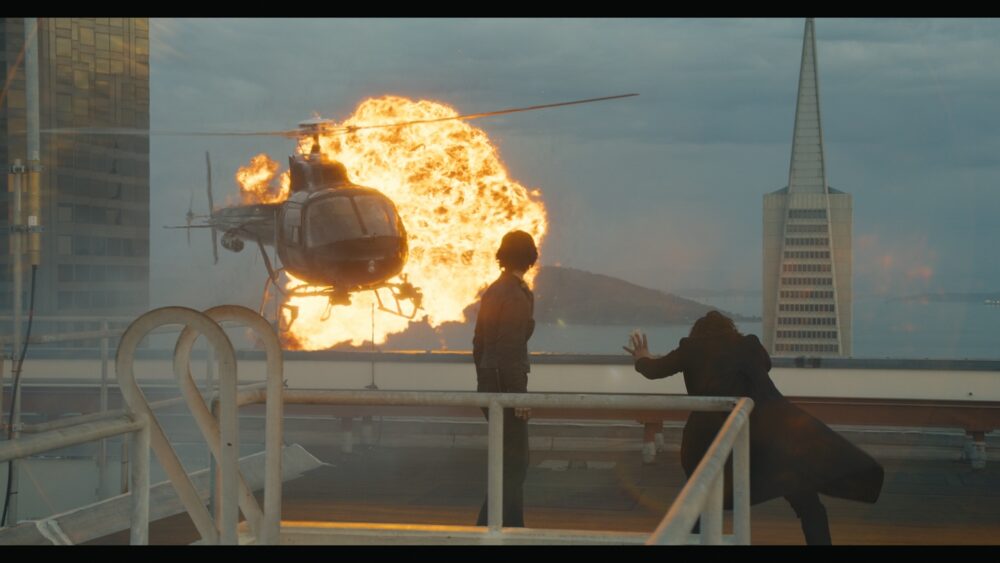 “Neo and Trinity’s final leap of faith from 44 Montgomery building in San Francisco, as seen in the trailer, was carried out as an incredible stunt by the actors and digital intervention was used sparingly and with care,” said Page. “Keanu Reeves and Carrie Anne Moss did the jump for real several times over the course of a few days. Framestore then matched the footage together, removed the wires, and stabilized any motion from the rig, cutting between a real and CG helicopter. We also replicated the Montgomery building in order to destroy it later in the scene.”

In total, Framestore built 26 unique digital characters, 18 vehicles, helicopters and a cat, along with various environments. Complex effects simulations were completed for crushing cars, destruction, and helicopters exploding and crashing into buildings.