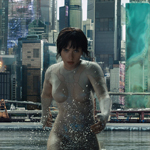 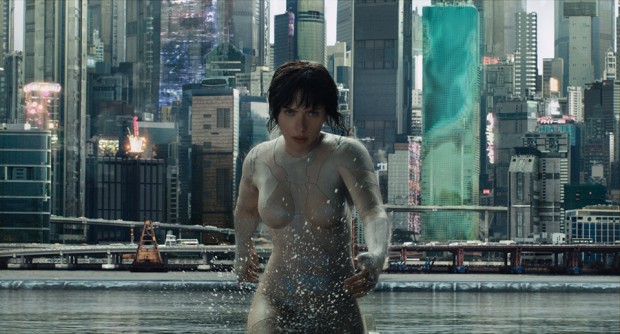 An iconic anime gets a live-action update as Scarlett Johansson steps into the Major’s shoes in Ghost in the Shell.

The live-action upgrade of Ghost in the Shell by filmmaker Rupert Sanders (Snow White and the Huntsman) stars Scarlett Johansson (Under the Skin) as a government-sanctioned cyborg hunting an Internet terrorist who is hacking into the minds of the cyber-enhanced citizens of New Port City.

Realizing that not everything could be captured practically, Sanders sought the Oscar-winning expertise of Guillaume Rocheron (Life of Pi) and John Dykstra (Star Wars) to supervise 1,200 visual-effects shots, of which 996 were done by MPC.

“We had to build a city with all of these ‘solograms’ (solid holographic advertisements),” says MPC Visual-Effects Supervisor Axel Bonami. “Other facilities worked on the graphic design as we were constructing the city at the same time.”

Sixty ads were created with some of them the size of a skyscraper.

“We had a rig with 80 video cameras synced together shooting clips that were around 400 frames long,” says Bonami. “Then we had to solve each image in photogrammetry to generate a three-dimensional model, which had the texture baked in. A pixelized-look was applied to every frame of the model that varied depending on the quality of the advertisements. Once we knew where the solograms were going to be put into the city, we did a secondary lighting pass to incorporate the actual shot lighting.”

Establishing shots that float above and through New Port City were dubbed “ghost cams.”

“Guillaume Rocheron used Google Maps to create a rough version of the camera going through Hong Kong,” says Bonami. “Originally, the idea was to have drone footage, but it didn’t work out because of Hong Kong regulations. A team spent nights of going up onto rooftops and taking photographic footage along the path the camera would travel.”

Miniatures were made of monolithic buildings that were turned into CG versions. “We put in many 3D props,” says Bonami. “Once everyone was happy with the camera move, Rupert and Guillaume decided where to put the storytelling solograms. Then we could start putting in the secondary ones as well as directing crowds, cars, highways and street signage.”

Unlike the Major (Johansson), Kuze, played by Michael Pitt, is viewed to be a failed robotic experiment.

“Rupert had us strip the design down in order to see more of the internals, muscles and skeleton, so to emphasize that Kuze mirrors Scarlett’s character,” says Bonami. “Most of Michael Pitt was replaced, but we kept his eyes, lips and the subtleness of his expression.”

Clockwork mechanisms are revealed beneath the shell encasement.

“We cheated the lighting of the skeletons by adding some subtle rim lighting,” Bonami says. “Guillaume brought the skeleton prop (created by Weta Workshop) on set, so we had a lighting reference. The prop muscles were too much like clear plastic, so we added a Gummy Bear feel to make them look more organic.”

Living up to the anime was another challenge, especially for some of the best-known scenes. “The shelling sequence is one of the most iconic sequences from the anime so there was no pressure at all!” laughs Bonami. “We wanted to add a photorealistic look to it. Everything was shot with the skeleton prop which was replaced with a CG version for camera moves and reframing. There are still a few shots with the practical skeleton. We studied with Rupert the color balance for the scene. When she comes out of the white liquid, we used practical and CG shots.”

The fluid simulations were complicated by having to match the live-action footage. “The previs gave us a good reference, but we wanted to have skin scatter and look slightly transparent as well as to get the right elevation towards camera, so that framing worked with all of the shots,” he says.

In another key sequence, Major leaps off of a high-rise building. “We had great reference of a stunt person wearing the thermoptic suit jumping off of the roof,” says Bonami, who had to make the invisible Major visible for the viewer. “The thermoptic suit doesn’t always work well, so that is when the high-tech outfit reveals how it works. However, you still have something quite gracious selling the idea that it’s a moving invisible shape.”

Weta Workshop practically made a thermoptic suit out of silicone, which was replaced with a CG version. “There were too many unwanted folds or segments of suit were bulging and creating some unflattering shapes,” says Bonami. “Also, we had to add some iridescence. Then Rupert asked us to make the suit even thinner so to have it as a second skin.”

Capturing Major in action was often tricky, as in a courtyard fight that takes place in front of a CG cityscape and in a shallow pool of water.

“We knew that the Major was going to be mostly invisible,” says Bonami. “We did have shots of a stunt person doing kicks and punches which we used as our basis for the animation. We used some of the water interaction coming from the fight and on top of that there were additional simulations for the limbs so to create those water arcs. We had an animation blocking stage that utilized a rig of tubes to produce the positioning and physics of what we wanted the arc to do which were passed on to the effects team to simulate.”

A small gimbal section was made for the top of the spider tank to serve as an interactive element with  Johansson.

“The tank is remotely driven by Cutter (Peter Ferdiando), who is situated in a holographic control room,” says Bonami. “We wanted to introduce the fact that the Major is going to win because she’s smarter. Even though we wanted to have all of this motion it was important that the tank still feel constrained.”

The Major hacks into the memory of robot geisha resulting in an abstract scene where people are not recalled in their entirety and deteriorate over time.

“Guillaume knew where all of these characters would be sitting so they were specifically lit for the environment.” Bonami says. “Ghost in the Shell was quite a challenge as we wanted to make sure that everything was going to work, look beautiful and please everyone. I am personally looking forward to the shelling sequence because I like beauty of it.”

Toon Competition
Exclusive Preview: Papercutz Comic ‘The Loud House: There Will Be Chaos’