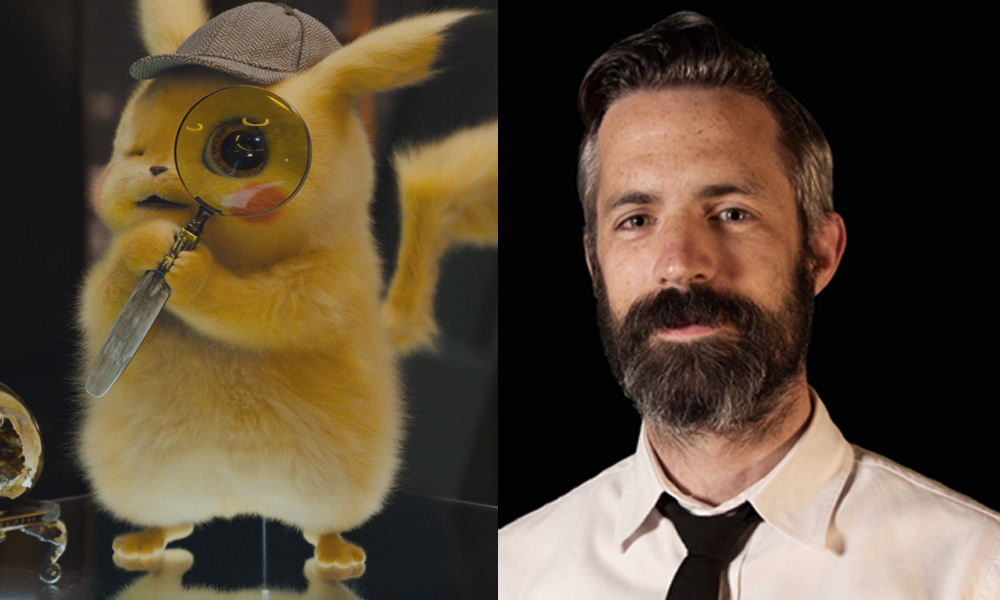 With advances in visual technology, studios have become very keen to transform classic animation properties into blockbuster big-screen hybrids — drawing both grown-up fans and the newest generation. During the production of Pokémon: Detective Pikachu, which lasted 26 months, MPC vfx supervisor Pete Dionne was treated as a superstar by his seven- and nine-year-old children. “I bought each of them a Pokémon deck to study and every weekend all of what they wanted to talk about was Pokémon,” laughs Dionne. “It’s amazing how much info I gleaned from those two.”

“Some of the choices that Rob made, like shooting it on film and going out on location in the grimiest corners of London, were great because we wanted to embrace the design of these super vibrant cartoony characters while at the same time re-envision them as living and breathing creatures,” notes Dionne. “In addition to designing and developing the assets, we had a big team of animators working purely on test shots as well as character and animation development.”

Dionne explains that the director wanted to have a visual representation of the characters and their personalities before the team went to camera so he could communicate those visuals to everyone else on the set. “But then, we had to go through a rigorous approval process with The Pokémon Company,” he adds. “They were very precious about their intellectual property, and that was extremely limiting to us because some aspects of the 2D anime design didn’t translate into 3D and reality. Fortunately, we had the time to rise to the challenge and come out of the other side with characters that exist in this world but stay true to the Pokémon designs.”

One of the directorial mandates was to avoid animation that felt too gestural and keyframed even for the implausible Pokémon characters. “Early on we tried to create characters that could give us a great range of performance and motion, but what ended up happening is that they turned into cartoons quickly,” explains Dionne. “Pikachu became like a little human in a costume. We started imagining Pikachu as an upright quadruped and looked at how the skeleton and muscle system would constrain and limit the mobility of how he moves around in the world and his gestures. As soon as we started embracing that, then the character of Pikachu started forming.”

The vfx supe says the Mr. Mime character was difficult to create and execute, because he was both humanoid and cartoony. “That’s one character where we partly pivoted in his shading, removed the fleshiness from him, and rebuilt and re-shaded him as if he’s fully synthetic in surfacing; the flesh became more like squishy foam Nerf balls and his big shoulder pads resembled rubber kickballs.” 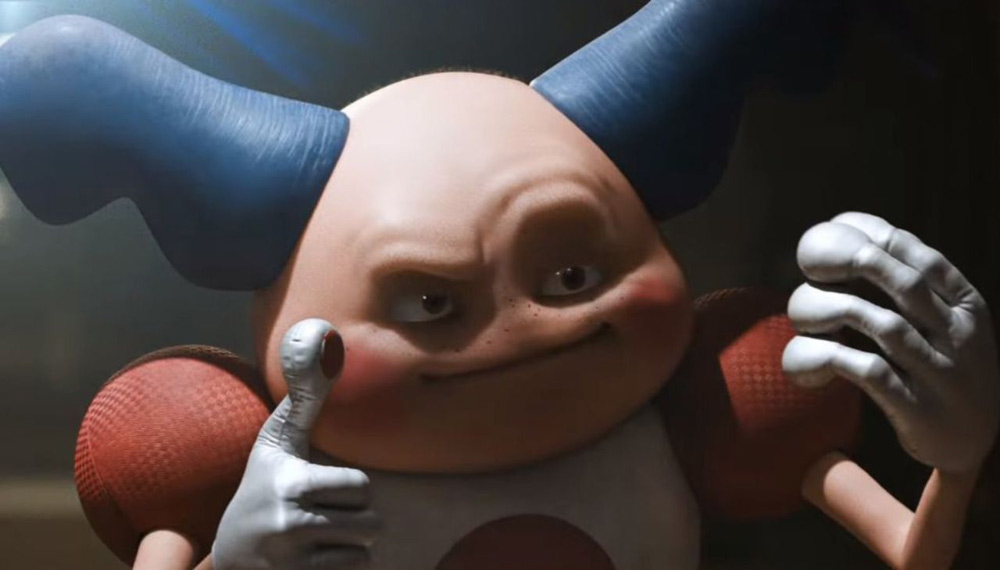 Adding to the complexity of Pikachu was his ability to speak. “Early on we did a set of shapes matching the 2D anime for Pikachu but they offered us a limited range of performance,” remarks Dionne. “Then we had shapes that were a full set of FACS based off of Ryan Reynolds’ performance capture, but they looked off-model. We did an in-between pass where we took all of the complex shapes in the set of FACS that we did for Ryan but then tailored each one to match one of the key six Pikachu anime shapes. We had 20 facial poses that were a ‘W’ shaped mouth, but there will be subtle nuances between that ‘W’ shape to try to match what Ryan’s human mouth was doing. The same thing was done with the upside down ‘V’ mouth. Once we had nailed that down then our animators could capture Ryan’s performance but still keep it looking like Pikachu the whole time.”

Making the interaction believable between the digital creatures and the live-action cast (Justice Smith, Kathryn Newton, Suki Waterhouse, Omar Chaparro, Chris Geere, Rita Ora, Ken Watanabe and Bill Nighy) was another critical task. “Beyond a couple of sequences, most of the plates were retained throughout the film,” notes Dionne. “We had quite a robust process of shooting with stuffies and puppeteers.”

According to Dionne, it was important to Letterman to be able to visualize the characters, and that they would exist in the frame not only for him but for everyone. “On any given set-up, the first couple of takes would always have either a puppeteer or a static stuffie for everyone to react to,” he notes. “Only when we had the confidence in the shot blocking and the actors felt comfortable with where these CG creatures were going to be placed would we take the stuffies out and then do a couple of more passes. Many times, the best shots happened to be the ones with the puppeteers in frame. We had quite a lot of prep work to go through to cleanup stuffies and puppeteers out of the plate.” 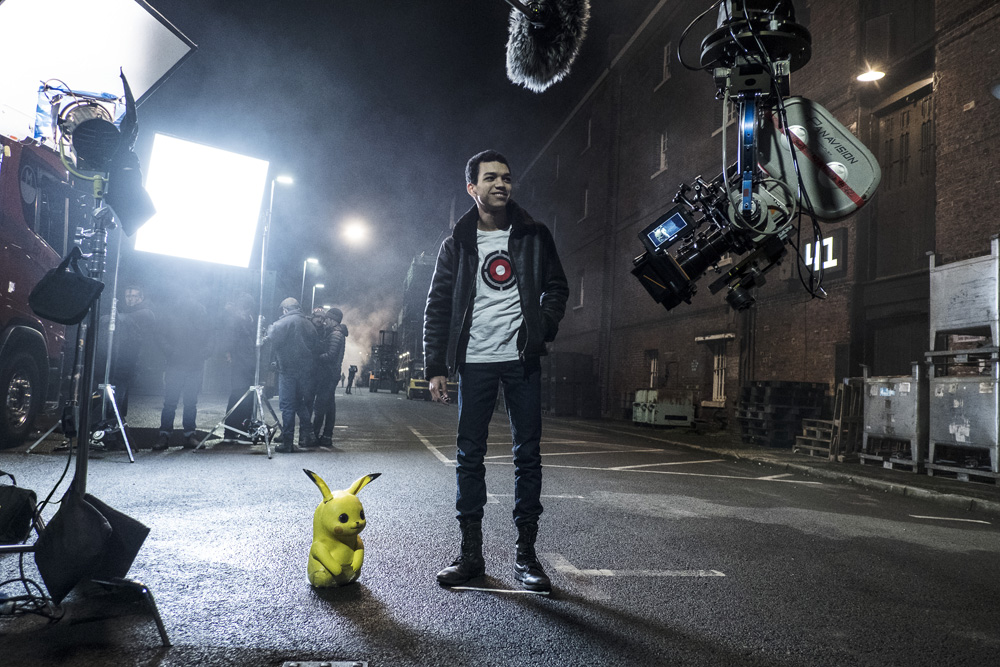 The film is set against an urban environment where humans and Pokémon co-exist. “[Five blocks of] London were shot as Ryme City, and then we embellished the skyline and added Pokémon themed signage,” explains Dionne. “The final battle becomes an aerial battle and because of restrictions in terms of airspace we were limited in what could be shot as plate photography, so the whole downtown core had to be digitally rebuilt for 200 shots.”

Since London lacks a big urban cityscape, 50 hero buildings and another 150 background towers were created to replicate the skyscraper density of Manhattan. “Because portions of the second act take place in the mountains outside of the city, we had open-source LiDAR of Vancouver and the surrounding region; we used that as our base to drop in Ryme City.”

One particularly challenging element was the legal clearance and approval required for the street and building signage. “Our MPC design team led by Ryan Hays in London came up with 300 unique signs, 200 of them were Pokémon themed. We not only designed the graphical content but also had to build 300 CG sign structures that allowed us to attach them to buildings.”

Principal photography also took place in Scotland. “We had a team of about five people spending 12 days going all around the Scottish Highlands, capturing data through ground, drone and helicopter photography along with ground and large-scale LiDAR,” reveals Dionne. “We pulled out all the stops to try to get as much data from clumps of grass, bushes, trees, terrain and rocky features; that gave us the basis of reality to pivot off of as we built the Torterra Forest. We took a specific mountain range in the Scottish Highlands, rebuilt that terrain in CG, instanced millions of trees, bushes, grass on top of all of it, we then chopped them off at the bottom and used that as the top of the Torterra. Staying true to the design of a regular Torterra, we scaled them up to stick underneath the mountains along with the appropriate detailing to get a sense of scale that they would have grown to.”