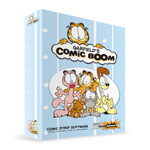 “Back in my day we had only pencils and paper,” notes Davis. “This new software is like adding a jet pack to creativity. Kids can craft characters and backgrounds and tell a story with such ease and speed that I’m a little worried I might be out of a job soon.”

Garfield’s Comic Boom encourages creativity and storytelling with easy-to-use drawing and coloring tools, props, and library items prompting kids to produce comic panels, comic strips, and even comic books. The software also allows users to record sound and voice-over, turning the child into the director of their own unique production. The final product can be instantly broadcast via e-mail, YouTube, Facebook, and mobile.

As an added bonus, Davis offers cartooning tips and tricks-of-the-trade for budding cartoonists in an exclusive tutorial for Garfield’s Comic Boom users. The new software is available for purchase beginning August 11th via the Toon Boom product store at http://toonboom.com/garfield. Customers can use a promo code: GARFIELD, to receive $10 off the purchase. The promo code is valid until October 1, 2011.

“Garfield’s Comic Boom is a great addition to Toon Boom’s family of fun products. We are very proud to work with Jim Davis on this project and look forward to seeing the entertaining comic books this easy-to-use application will inspire to kids of all ages!” shared Joan Vogelesang, President and Chief Executive Officer at Toon Boom Animation.

The product will make its first public appearance at the Montreal ComicCon, September 17-21. Davis’ friend comicbook artist, Lynn Johnston (For Better or For Worse) is scheduled to conduct a workshop on creativity and storytelling. A demonstration will be given on the product’s capabilities at the ComicCon main stage. For more info, visit www.toonboom.com