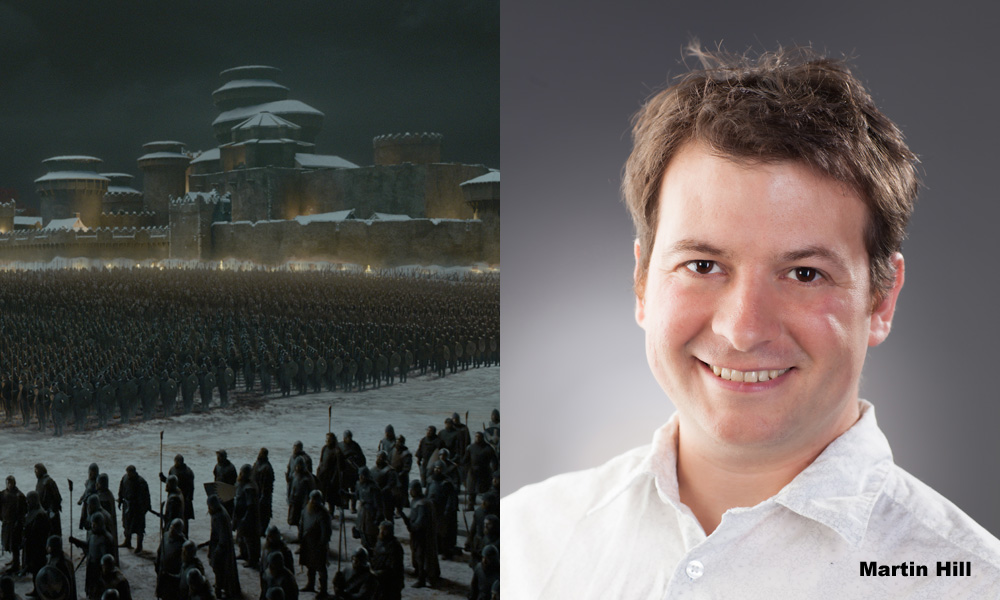 Now that the final episode of Game of Thrones has aired on HBO, and fans have stopped analyzing every detail of the series’ concluding eighth season, the show’s vfx supervisor Martin Hill can finally reveal some of the secrets of his trade. The season’s opener built up to the long-anticipated battle against the dead; and the sprawling story of a bloody feud for the Iron Throne — pitting political intrigue against dragons, sorcerers, psychics and giants — finally came to an end. 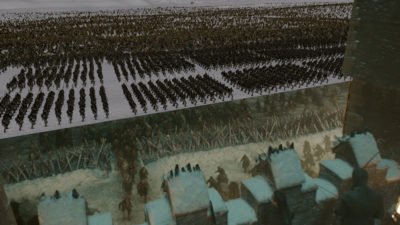 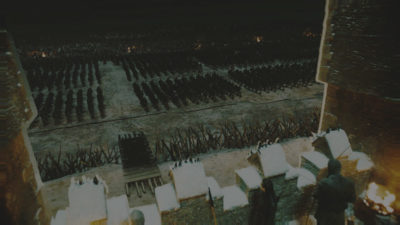 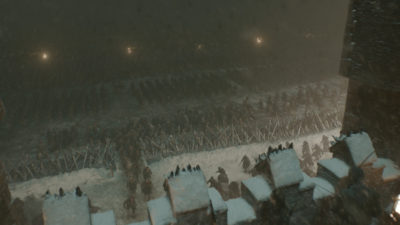 About 300 of the 600 visual effects shots provided by Weta Digital for the last six episodes were devoted to depicting the epic battle to defend Winterfell from the Night King’s forces, with other significant contributions being the deaths of Lyanna Mormont (Bella Ramsey) and Rhaegal as well as the collapse of the Dragon Skull Room at King’s Landing.

A deliberate effort was made by director Miguel Sapochnik and cinematographer Fabian Wagner to elevate the presence of shadows in the night-time environment to obscure parts of the frame in Winterfell battle episode “The Long Night” (Ep. 3).

“Miguel did a lot of genre hopping from the fancy battle genre to horror to survival horror,” notes Hill, whose many credits include The Wolverine, Prometheus and The Hobbit: An Unexpected Journey. “One of the things that he was conscious of is the things that you can’t see are often more terrifying than the things you can. We would always be lighting by the moon or the bounce light from the cloud cover plus any kind of practicals or flame effects that were going on. But there were instances like when the Dothraki charge that we only see their flickering swords going out. They didn’t want to reveal the White Walkers until much later when they impact with the armies at Winterfell.” 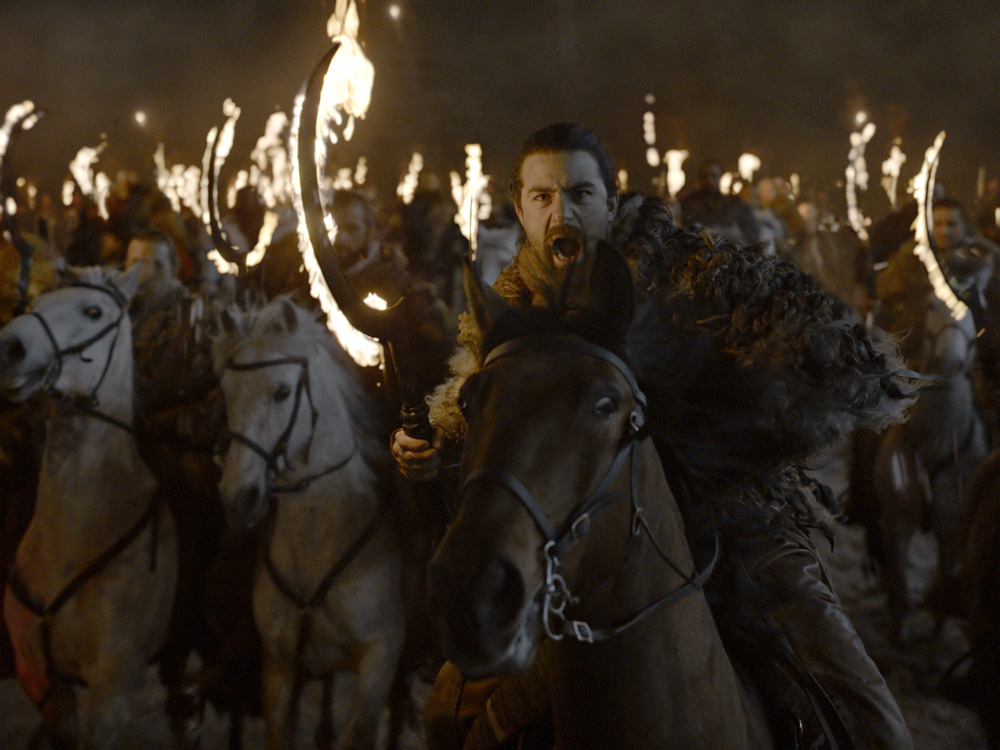 Through the magic of Melisandre (Carice van Houten), the signature weapon of the Dothraki known as the arakh is set ablaze. “The traditional way of doing this would be to track the swords, run 3D fluid simulations for the fire, and composite each of them, but that would be a laborious process,” remarks Hill. “There are hundreds of swords there moving around. Weta Digital has an in-house software called Eddy which is a fluid solver within Nuke. We would use an optical flow system to stabilize all of the swords and would paint onto that single frame either the animation of the swords lighting up or having the swords on. Some of the swords were lit up by LEDs, so we would bring them up to that similar level.”

During the battle’s most suspenseful scenes, 30,000 wights converge upon Winterfell. “We’re using Massive to simulate most of the wights when they are in such a big crowd and hero animate the close-up ones,” explains Hill. “We made sure that our digital versions lined up and looked equivalent to the plate wights.” Also, the ramifications of the dragon fire from Drogon and Rhaegal needed to be taken into account. “When the dragon fire impacts the ground, we have the forces from the fluid fire simulation throwing the wights up into the air,” notes Hill. “Also, within Massive we have the wight agents disintegrate so they would fall apart halfway down their joint junctions and at their joint junctions.”

Of course, fans of the show know and expect a certain dragon fire methodology from the series. As Hill explains, “They have a motion-control flamethrower and the shots are preplanned, which allows for the position of the fire to be mapped; that was terrific because it gave us a baseline of what the fire should look like.”

“Once the Night King arrives and a big tendril storm comes in, it’s like a dense cloud,” says Hill. “That was great because we could use that for projecting shadows up onto which made for a nice and effective graphic of the dragon approaching. We used Eddy to have mist travel through the frame. For the sake of flexibility, we automatically rendered three or four fluid or snow simulations in the general direction of the wind. So, when starting a shot, compositors could see which one worked best and drop that straight in. It would be a 3D simulation so you could see it go through all of the Massive armies. Where we used Shadow Sling [a proprietary deep compositing tool] was in terms of the interactive lighting because up to that point we hadn’t actually lit the volumes. If the dragon fire or the position of the moon moved at all, we could re-shadow and relight these volumes in deep compositing inside of Nuke.” 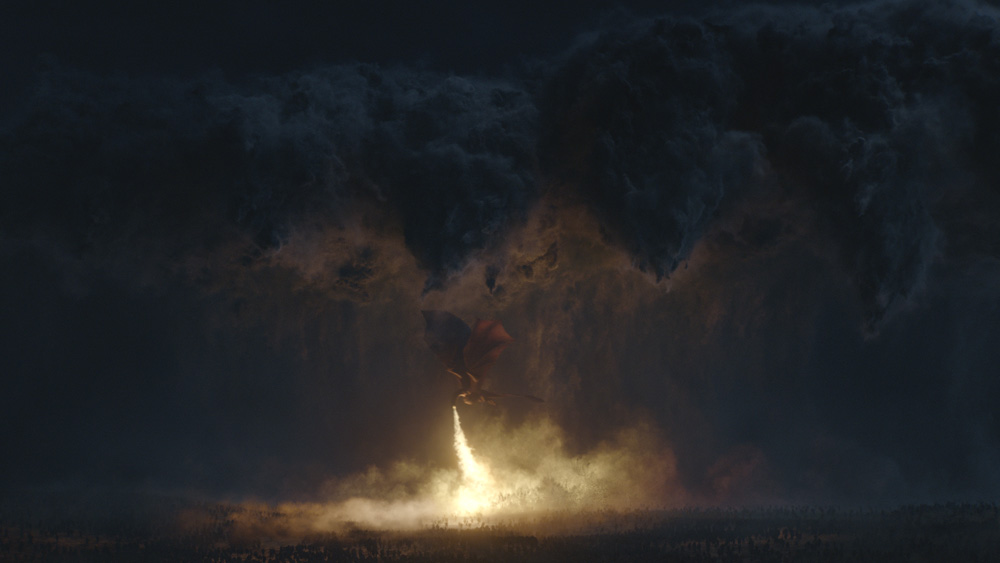 A David and Goliath confrontation takes place when tiny Lyanna Mormont stabs the wight giant Crum in the eye as she is being crushed to death in his hands. “We were planning to use the plates of Lyana and Crum and composite them together,” reveals Hill. “But when putting them together we wanted to make this more visceral and shocking for the audience. We replaced Lyana with a CG body and replaced Crum’s hand with a CG hand so we could crush Lyana’s body and composite elements of blood coming out of her mouth. Lyana gets her own back by stabbing Crum in the eye, and he disintegrates. We essentially created a model and simulation of Crum’s clothes, hair, skin, tissue, fascia, muscle and bone, and did a multilevel disintegration that was projected onto the plate and relit it as he fell apart.” 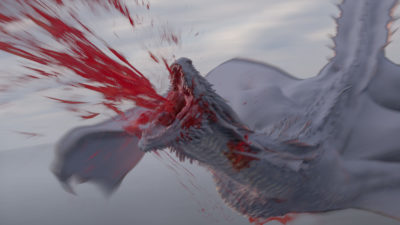 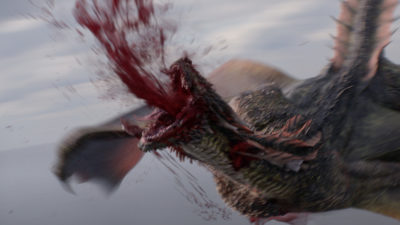 When her forces are surprised by Euron Greyjoy (Pilou Asbæk) and his fleet in Blackwater Bay in episode four, Daenerys Targaryen (Emilia Clarke) witnesses the killing of her beloved dragon Rhaegal. “Originally, Rhaegal’s death was going to be three separate shots, but it needed to be shocking because it comes out of nowhere. We changed the shot [into a single]. You come in right past his face for the final scream [as the third bolt hits]. Then it was the case of how can we take this farther. One of the thoughts was when the first arrow stabs him in the chest maybe it has filled his lungs with blood and as Rhaegal gives this last gasp, he coughs up all of this blood that sprays out into camera.”

Maintaining damage continuity was important. “In episode three, Rhaegal gets torn up by Viserion, so what we did was add all of these tears, abrasions and scabs on his wing membranes. There’s a nice point just before Rhaegal gets shot when the sun is behind him, the light is transmitting through his wings, and you can see how messed up he is. It also affected his animation.” 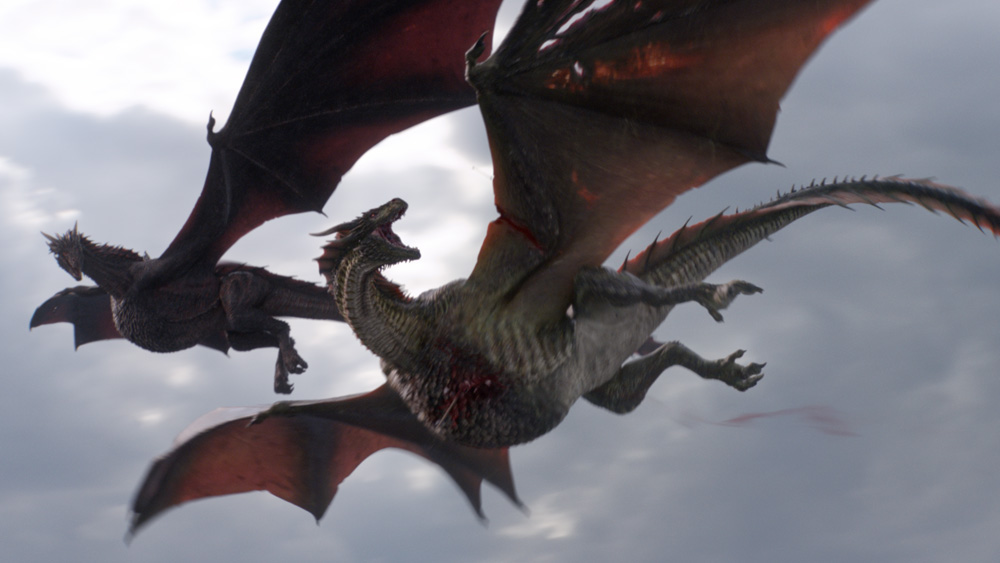 In another pivotal scene, Cersei (Lena Heady) and Jamie Lannister (Nikolaj Coster-Waldau) perish as the Dragon Skull Room at King’s Landing collapses around them. “It’s always fun killing off some major characters!” states Hill. “That was great because it one of those cases where they didn’t want to have a big graphic death. It was quite a beatific moment. We rearranged the Skull Room so you can see down a whole series of arches into the distance. Then what we did was a back to front simulation so the furthest arch collapsed catastrophically first and then the one in front of that. You have this percussive effect, so by the time it hits Cersei and Jamie you know it’s going to be inevitable that they’re going to be crushed.”

Hill adds, “One of the exciting things was the diversity of work. There were a lot of bespoke shots throughout. My favorite scenes are either the courtyard of Winterfell being smashed up by Viserion before the death of the Night King, or Rhaegal’s death.”

You can stream all eight seasons of Game of Thrones on HBO. The cabler is also working on a prequel to the series. 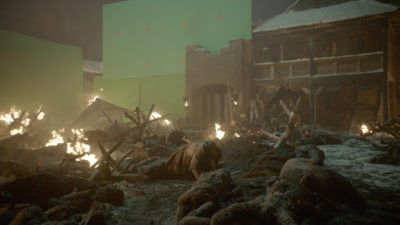 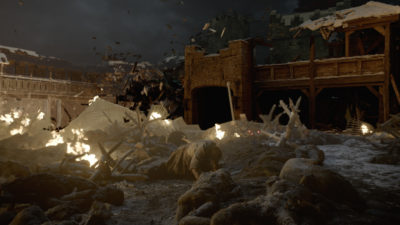 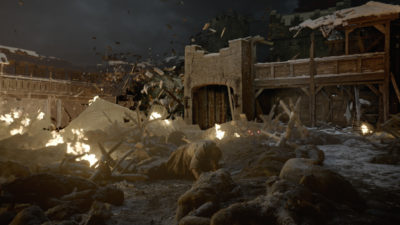 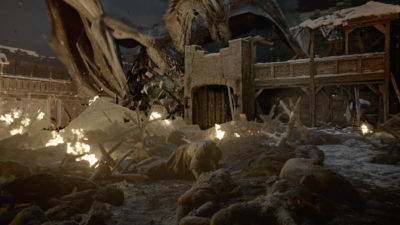 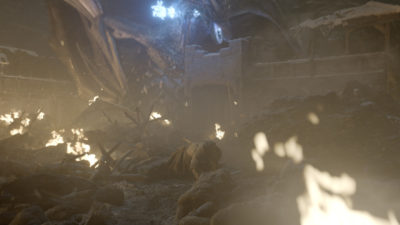 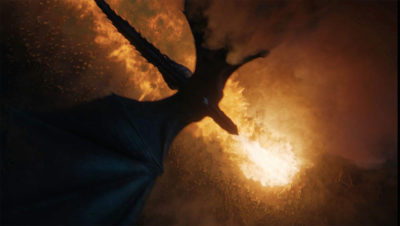 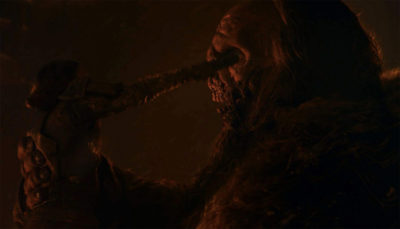