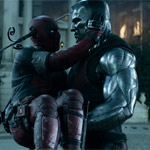 Oscar-winning creative studio Framestore returned to the world of action-packed comic-book movies in a team up with 20th Century Fox and director David Leitch for Deadpool 2, the highly-anticipated sequel featuring Ryan Reynolds as the wisecracking Marvel Comics mercenary Deadpool. The studio produced 229 shots for the feature, leading work on the two main CG characters of the piece, Colossus and Juggernaut, as well as providing superhero VFX and animation work. The CG finale sequence is the crown jewel of the piece, with 120 shots of predominantly full CG.

“People really wanted to join the team and be part of the project,” said CG supervisor Ben Magana. “The artists were fans of the character, really motivated and wanted to make the best film possible.”

Fan-favorite character Juggernaut returns to the silver screen (after a viral clip-worthy cameo in X-Men: The Last Stand), thanks to the Framestore team. “We got to see one frame of the Juggernaut in the trailer,” said Stephane Nazé, VFX supervisor, “And that was a deliberate choice, to get fans questioning what he was going to look like and how big a role he was going to play.”

Framestore’s Art Department worked on some initial concepts for the character, which had been previously portrayed in several films and comics. A key challenge was the sense of scale: The Juggernaut (voiced by Reynolds) is portrayed as a huge, unstoppable force, which impacted how the animation was treated.

“We gave him a delayed speed-up into action, but once he’s in motion he’s surprisingly fast,” explained Bernd Angerer, animation supervisor. “Working out the insane power of his punches in the final battle was a fun challenge.”

Colossus, who appeared throughout the first Deadpool film, always brings a few challenges. The character played by Stefan Kapičić is able to transform his body tissue into an organic, steel-like substance that grants him superhuman strength. Framestore artists were given the chance to adapt him for the sequel.

“With Colossus, we wanted to keep the face from the first movie, but we changed everything else about him,” said Nazé. The team recreated him as fully CG with each line between his muscles splitting the geometry. A lot of time was taken to focus on the rigging and muscle deformation. “We used the gaps between the lines to compress the different volumes to help with the rigidity.”

Angerer added: “We [the animation department] experimented with everything: from more natural human behavior through to very stiff, almost statuesque poses. Eventually, we struck a good balance between him being a tall, tense authority that barely moves, in some moments, and a fierce, athletic fighter with a surprising range of motion and expressiveness in others.”

The crew also got to have fun with the creative exercise of Deadpool’s high-res digital double, since the antihero can regenerate and heal from any kind of damage at a hyper-accelerated rate. Of course, this is very frustrating for the Juggernaut, who tries to kill Deadpool by tearing him in half.

With the inside of Deadpool’s torso laid bare for all to see, the team had to use trial and error to get the look of the sequence right, with the assets and FX departments dealing with the entrails and gore, and Creature FX artists focusing on the cloth simulation of Deadpool’s clothing.

“It had to be impactful and gross out the audience,” said Ben Magana, CG Supervisor, “But we didn’t want to push that too far. It was a case of making it look over-the-top, so that it didn’t seem too ‘real’ to the audience, whilst still being very funny.”

Framestore had the daunting task of creating an epic final battle for the film between several super-powered heroes. “Deadpool actually says, ‘Big CG fight coming,’” noted Magana. “We thought, OK, the audience expects something big now – we have to deliver it!”

The finale did end up a mostly CG sequence, with a tight timeframe for shot delivery. “It was quite a challenge, but a fun one,” said Nazé. “The team had so much passion and so many ideas for the sequence.”

A hospital was used as the environment in plates shot on set, but the decision was quickly made to build a CG environment to better interact with the huge amount of action taking place. The team created the main building, surrounded by trees, a swimming pool, gymnasium and playground in CG. Digidoubles of characters, including Deadpool, Cable (Josh Brolin), Domino (Zazie Beetz) and Negasonic Teenage Warhead (Brianna Hildebrand) were used at key moments. In addition, there is a large, sweeping fire raging.

“We defined several stages of fire and smoke and then created a 3D setup that we could populate into the shots and update easily,” said Romain Rico, compositing supervisor. “The client also wanted to feel the night was coming, so we had to play with the light, starting with a late afternoon mood and ending at dusk, which was a big compositing and look-dev challenge.”

For the duke-it-out showdown between Juggernaut and Colossus, the animators referenced boxing and wrestling footage for inspiration (and technique pointers). “The problem we had was that both characters are indestructible,” said Angerer. “How do we make the assaults bigger and bigger? Working out these actions for maximum impact was both fun and a challenge.”

In the end, it seems the team had just as much fun infusing comic-book energy into every shot of Deadpool 2 as audiences have watching it. “As a supervisor, it’s part your job to motivate a team and encourage the best work possible in the timeframe,” Nazé observed. “On this show, it felt different. The team was really engaged all of the time and the film feels special because of that.”

Info and showtimes at www.deadpool.com.