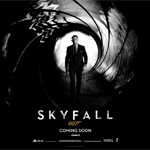 Commemorating the 50th anniversary of the James Bond film franchise, long-time collaborators Daniel Kleinman and Framestore teamed up for the fifth time to deliver the stunning opening-title sequence for Skyfall. The four-minute sequence opens underwater as Bond (Daniel Craig) sinks lifelessly into the gloom, bleeding from a gunshot wound to the chest. Kleinman’s creative direction sends us spiraling on a psychological journey into Bond’s subconscious as he drifts closer and closer to death.

In the very early days of the project Daniel Kleinman presented Framestore with a first round of storyboards, which were developed in 3D pre-visualisation. Framestore collaborated with partner company The Third Floor to develop the project from still images to a moving animatic, this helped to refine concepts and the sense of continuous movement that both Sam Mendes and Danny Kleinman sought.

Next a live-action shoot captured specific performances and elements for the title sequence. Taking place over several days at Pinewood Studios the set included an underwater tank shoot for that opening drowning shot, a day with Daniel Craig to shoot actions for both the titles and the iconic ‘gun barrel sequence’ and a day of dancing girls and guys with guns.

William Bartlett, who regularly works with Kleinman, was vfx supervisor on the project, he was joined by Diarmid Harrison-Murray (head of 3D commercials) and Russell Dodgson (head of Nuke commercials). Framestore’s team started to discuss how they would approach the challenging piece and pull together the various scenes laid out in the pre-viz.

“One of the more challenging aspects of a job like this is to give the artists room to develop ideas, with the understanding that some might be dropped or changed as the job evolves,’ says Dodgson ‘The aim is for a cohesive sequence, that feels like it comes from one person’s mind. No one can be too precious about their own pixels!”

To that end, throughout the four month post-production schedule, many parts of the sequence developed, evolved and were re-designed in order to achieve a unified look.

One of the keys to the development of the piece was in keeping a tight, highly experienced core team of 2D and 3D artists. Between these individuals sequences were developed in parallel with regular input from the director.

Framestore’s Head of 3D Commercials Diarmid Harrison-Murray said, “This flexible way of working requires a different mindset but provides a great opportunity for creative ownership. By assigning all the VFX work – from setup, animation through to lighting – across an entire scene to just one artist, that person is able to develop their scene as a whole, rather than just contributing one smaller element to it. One great example of complete creative ownership is Martin Aufinger’s beautiful and technically accomplished CG dragons. It’s an incredibly satisfying way to work.”

The CG team had a huge variety of tasks to accomplish spanning 3D environments, fluid simulations, volumetric atmospherics, skulls, gravestones and a complex 3D character. All of which had to be created in a relatively short amount of time.

“One of the biggest 3D challenges was the creation of several full 3D volumetric environments such as the heart and skull sequence. This part of the sequence is made up of hundreds of blood veins all pulsating to the shot’s center element – a heart that transforms into a skull. Not only was it a difficult task to procedurally animate and simulate all the blood veins, the volumetric nature of the shots and the interactive lighting also posed a huge rendering challenge to the team. We chose Houdini and its renderer Mantra due to its fantastic volumetric rendering capacities. Its physically based render engine combined with our best artists’ creative input really pushed the quality of the images.”

The 2D and 3D teams collaborated extensively on many of the most complex sequences. One uses live-action footage, beautiful dancing women, to drive a 3D fluid simulation adding to the atmosphere of a classic Bond element, a black and white sequence reminiscent of looking through a kaleidoscope. There was also a massive amount of 2D work to get through. Nuke was the 2D tool chosen for the job and was used in some way by every artist on the job.

One of the first, and most important, tasks to be carried out was creating the 3D cameras to join together the almost continuous forward camera movement. William Bartlett took charge of this from the beginning. 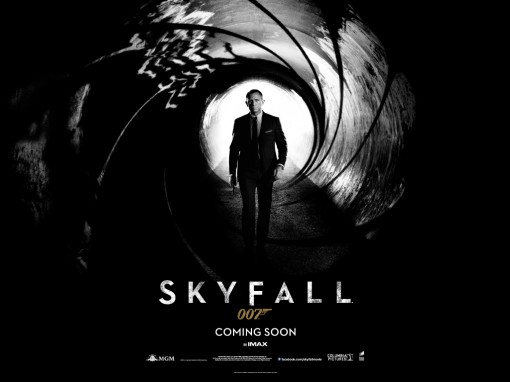 “From experience of working on this type of job over the years I have found that getting an overall sense of timing and movement is key to the job’s success.” Says Bartlett. “ As soon as we received an early version of the title song we concentrated on finding visual ways to complement the ebb and flow of the music. To do this, scenes were blocked out in Nuke, incorporating the live action footage, and cameras and basic geometry for many of the key scene were exported to the 3D team for development and execution”

“We are also lucky to have a 3D team with considerable Nuke skills” says Dodgson “often the 3D team develop scenes to very near final, in fact one of the pieces most visually stunning scenes – a journey through a graveyard of falling knives and guns – was entirely rendered and composited by our Head of 3D.”

Evolving right to the last minute, the piece closes with a dramatic sequence, which sees blood raining from the sky and bleeding gravestones crumble to the sound of Adele’s powerful voice. A classic Bond moment, and a piece that Framestore is proud to have been part of.

[This behind-the-scenes feature was provided by Framestore.]