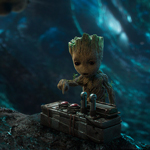 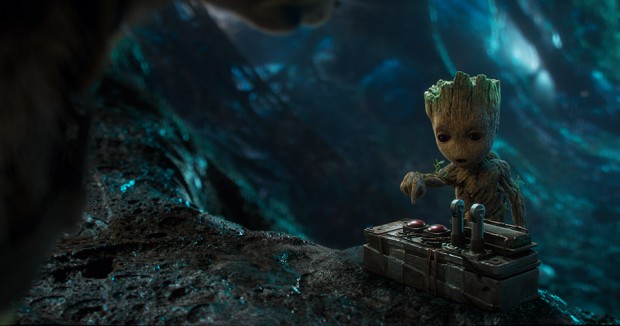 Guardians Of The Galaxy Vol. 2

The living planet and the baby version of everyone’s favorite tree alien demonstrate the care and attention put into Marvel Studios’ Guardians of the Galaxy, Vol. 2.

The two biggest animation highlights of Marvel’s Guardians of the Galaxy, Vol. 2 are Baby Groot, the rebooted tree-like humanoid (voiced by Vin Diesel), and Ego, the cosmic god and living planet, which becomes a human avatar (played by Kurt Russell). Ego also happens to be the father of Peter Quill (Chris Pratt), which complicates matters with the plot.

While Groot was shared by MPC and Framestore in the first Guardians movie, Framestore was tasked with redefining Baby Groot in Vol. 2.

Framestore rigged an expressive stretchy base that easily deformed and kept simple silhouettes for his facial expressions. For movement, the rigging group created patches of rigid bark.

“We were able to craft the character on two things: How he behaved in the first film and then defining the limits of his motion,” sayssays Arslan Elver, Framestore’s animation supervisor. “He’s quite small, so he can only point, and, facially, you’re limited, with two huge eyes and a tiny saw mouth.”

However, in terms of personality, director James Gunn didn’t want Baby Groot to be too human, too cute or too cartoony. That meant pulling back on the smile, so he didn’t look goofy, or not stretching his ass too much so he wasn’t unappealing.

The most challenging sequence with Groot was actually his introduction during the opening sequence, in which the tyke joyfully dances to ELO’s Mr. Blue Sky, while the Guardians battle the octopus-like Abilisk creature in the background.

Gunn provided dance reference for Baby Groot and then worked closely with Framestore to refine it. The director wanted less arm movement and more hip action from Baby Groot. “But the camera was faster than Baby Groot’s steps and we had to work on that,” Elver says.

There was also a lot of distance to cover while integrating the battle without cutting. For this, they conceived a series of hops and cheats. It was a long process of tweaking the camera, lighting, animation and comic beats.

Best of all, they came up with a freeze-frame effect that acted as a bridge, while also distorting the environment for more dynamic compositions. To up the wow factor, Gunn then added explosions.

Another inspiration came when Dave Bautista’s Drax interrupts the musical flow by falling into one of the speakers. This angers the tyke. “Baby Groot first hit him with his fists and then James thought it would be better with a piece of the speaker. From then on, Baby Groot dislikes Drax,” Elver says.

Meanwhile, Weta Digital created the organic look of Ego’s interior body (comprised of complex fractal patterns inspired by artist Hal Tenny, who served as a visual consultant), as well as the destruction and regeneration of Ego during the father-son battle.

“The fractals were an organic concept, instead of doing another rocky planet,” says Weta VFX supervisor Guy Williams. “We had to find new functions that look alien: stacked tubes or mushroom shapes. But if you manipulate the size, it changes the shape.”

And the problem with fractals is that they’re infinite, and Weta needed to work in a finite space with only two months to solve the geometry. So Weta wrote a shortcut tool that defined workable math and filled up the volume with fractal-like spheres.

The destruction of Ego, however, provided a different set of challenges. “We go from having Peter Quill shooting him with 12 laser bolts and shooting 40 percent of his body away, to having him transform into David Hasselhoff, to appearing as a celestial light cage,” Williams says.

Weta used digital doubles of Russell and Hasselhoff and remnants of the fractal patterns of the planetary design.

Then they ran into a further problem: Avoiding an R rating because of so much mutilation and gore, with internal organs dangling behind Ego. Weta offered to make Ego look more fractal, oozing black blood, but Gunn would have none of that. He wanted to keep Ego looking like Russell.

The answer: Weta toned down the gore by turning it into particulate sand, thanks to an artist who came up with the transformation effect from scratch. “We also grew fractals around the areas of destruction,” says Williams.

As long as the mutilation and gore don’t look human, you can get away with anything.