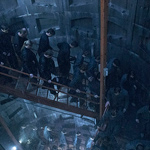 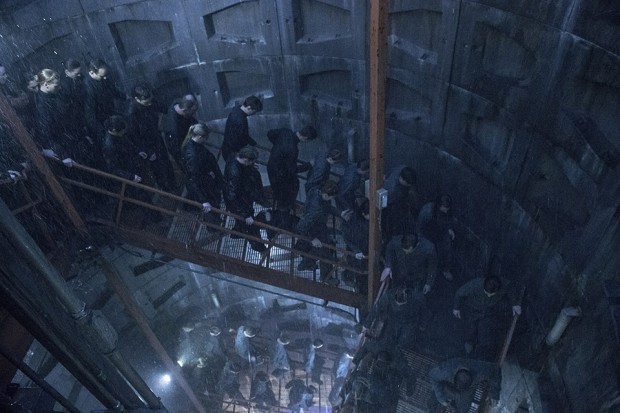 Naturalistic and convincing environments form the canvass for the subjective storytelling of The Hunger Games: Mockingjay — Part 1.

Dystopian sci-fi always brings out the spectacular in movies, but a more subtle and subjective approach was required of the visual effects for The Hunger Games: Mockingjay — Part 1.

The first half of the adaptation of the climactic tome in Suzanne Collins’ best-selling young-adult novel epic takes the tale of Katniss Everdeen, played again by Oscar-winner Jennifer Lawrence, in a new direction. Having survived the Quarter Quell and escaping the clutches of the Capitol in The Hunger Games: Catching Fire, Katniss awakes in the long-though-destroyed District 13 to face the news that home in District 12 has been destroyed and that she is expected to play a leading role in the coming revolution.

Visual-effects supervisor Charles Gibson, whose previous work includes the Pirates of the Caribbean series, says the 950 effects shots in Mockingjay — Part 1 required a different approach given the way director Francis Lawrence wanted to tell the story.

“The films are played through the point of view of our main character, Katniss, and Francis wants a very real, accessible, naturalistic approach to everything,” says Gibson. “So for us in visual effects, it was finding a way to introduce more of a science fiction element in a real context.”

Realism was important, with the action in Mockingjay — Part 1 veering far from the futuristic facade of the Capitol and the Hunger Games in the previous films. “The world of the games was always sort of this thing off to the side, where the rules were not really that clearly known and you could do anything you wanted,” he says. “Here, it is the real world, so all the effects had to be extensions of our real world and played as naturalistically as everything else.”

Environment work formed the bulk of the effects work for Mockingjay — Part 1, which is a very different type of film than next year’s conclusion.

“The films are almost completely distinct,” says Gibson. “The first film is more of a science-fiction film and more of a political film, and the second film is more of a war film. It has more action in it and more scope and more that plays outside, above ground.”

The major set piece for Mockingjay — Part 1, is District 13, which has taken its revolution underground to escape destruction at the hands of the Capitol. Most of the vast complex is digital, with only a handful of small sets built for shooting. “There is a central shaft called The Collective, filed with people, and you get a sense at least of the height, of the scale of it,” says Gibson. “Later on, as we see other aspects, we realize there’s a kind of military component as well. The hovercraft hangers and where they keep their weaponry — all that’s underground as well, and those are completely digital environments.”

A good example of the challenges such environments present is a scene in which Katniss travels via hovercraft to see for herself the remnants of District 12. “Francis wanted to be with her all the time on board the hovercraft and as she walks out into the district after she lands,” says Gibson. A hovercraft set was built and its flight and landing simulated using a motion-controlled crane. The shot follows Katniss as she walks from the environment inside the hovercraft and into the exterior environment of District 12. “It’s one shot, and much of the movie is like that,” says Gibson.

While the shots sound simple, they’re anything but. “With the kinds of lenses and the atmosphere that Francis wanted — the quality of light — all of that requires a lot of technology to replicate,” he says. But pulling it off “just makes it feel completely real and natural.”

As such, there were few opportunities for straight on animation in Mockingjay — Part 1, though next year’s conclusion will make up for it. “The second film has creature work in it, and I can’t talk too much about but, but if you’ve read the book, it’s pretty clear,” Gibson says. “It’s a pretty major sequence and it’s full-on 3D creature work and it’s pretty exciting.”

The production had to deal with the death of actor Philip Seymour Hoffman, who plays rebellion leader Plutarch Heavensbee. Gibson says Hoffman completed prior to his death most of his work for the first film, requiring no effects work to complete. “For the second film, they just were able to rewrite his major scenes and solve the rest of it editorially,” he says.

The bulk of the work was handled by Double Negative in London and MPC in Vancouver. Supervised by Adrian de Wet, Double Negative handled the sequences in District 12, the hovercraft effects and a main action sequence that required them to show District 8 before, during and after the Capitol bombs it. MPC handled the District 13 work, as well as another revolt sequence in another district, under the supervision of David Seager.

Other facilities contributing to the film: Scanline VFX in Vancouver, Pixomondo, Rising Sun and Whiskeytree.

Dealing with such well-established and mature effects houses gave the movie a lot of freedom.

“It’s really leveraging off the sort of fantastic state of the general tools now and being able to have a very sort of fluid work style on set,” says Gibson. “I think generally rendering and compositing has gotten so good that I find we’re not making the kinds of compromises we used to have to make in doing set extensions, in doing compositing, in any of the traditional things that we do. And we can be very ambitious in terms of what we do in terms of using existing locations and changing them into something else for example.

The way the movie channeled that effects expertise in a different way made completing the work as rewarding as any other project Gibson has worked on and has him excited to move on to Mockingjay — Part 2.

“I don’t want to sound like I’m overstating it, but it really does make a huge difference when a film is so subjective and is really told through one person’s eyes,” says Gibson. “In a lot of ways, it feels more like you’re working on an independent film, but you still have to deal with these very big visual concepts and you have to shoehorn them into sometimes a seemingly modest style of storytelling.”