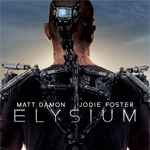 In 2009, South African director Neill Blomkamp knocked the socks off movie audiences around the world with his dazzling, original sci fi pic District 9. This month, he ups the ante with his beautifully crafted, futuristic epic Elysium, which serves up some striking vfx images in service of a well-told story.

Set against a backdrop of an over-populated and poverty-stricken Earth circa 2154, where the selfish super-rich have escaped to a Utopian satellite world in space, Elysium required close to 1000 vfx shots. Vfx supervisor Peter Muyzers and his team at Vancouver’s Imagine Engine delivered the lion’s share of these shots, while the rest were handled by San Rafael studio Whiskey Tree, Method, Moving Picture Company and ILM.

Muyzers, who was nominated for an Oscar for his phenomenal work on Blomkamp’s Disctrict 9, says that he and the director began discussing the possibilities of Elysium while they were still working on their first project together. 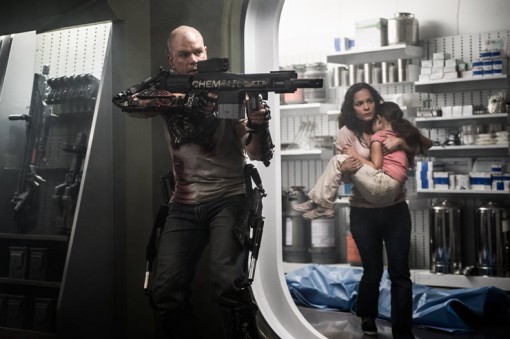 “Neill and I began talking about ideas for his next film over four years ago,” he recalls. “He wanted to explore this new world and was very adamant to create something quite unique. Of course, there have been so many great films exploring similar themes before, so we tried to do things differently and base a lot of it on they work that NASA had done in the 1970s, where they were looking at creating structures like this in space. You want to use as much scientific backup as you can, so we consulted with advisors at NASA and Jet Propulsion Lab. Then at some point, you need to leave it behind and take creative liberties for the sake of the story.”

Fans of District 9 will recognize some of the helmer’s visual trademarks, but the new film is a different beast in many ways.

“Elysium has a more epic feel, and the visual effects are also quite different since in District 9, we didn’t shoot a single blue-screen or green screen sequence,” notes Muyzers. “We don’t want to repeat the same work and just turn out these things like a factory. Our crew was very encouraged by the fact that we had new challenges and a variety of work to be delivered for this movie.” 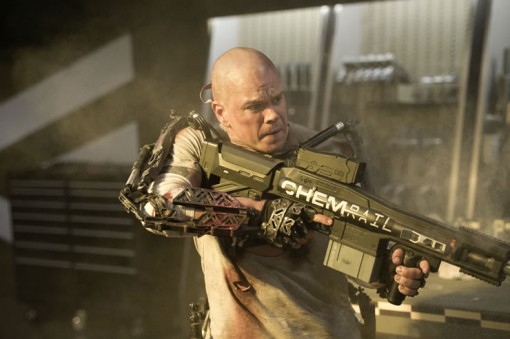 So how did the different houses divide the film’s many vfx requirements? Whiskey Tree was tasked with creating the organic structures, roads, lakes and waters on the ring-shaped space habitat of Elysium, while Image Engine worked on more mechanical structures, the glass, the spokes. ILM created the stunning aerial scene depicting a futuristic take based on the cityscape of downtown Los Angeles as a helicopter flies over.

“That was a monster shot and they worked long and hard on it,” says the film’s vfx supervisor. “It was a real honor to work with ILM on the show.”

Constructing the surface details and the ring of Elysium, which has been described as the wheel of a classic Chrysler, provided the team with some of its toughest challenge. 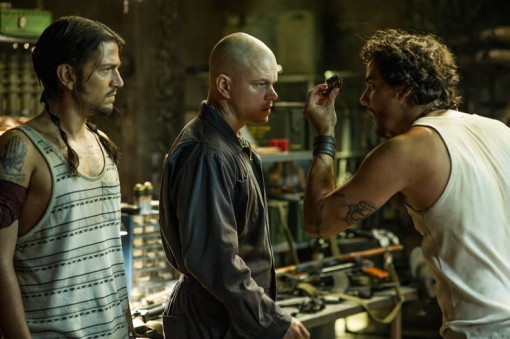 “When you think about creating a world of that size and the amount of detail it requires, the first instinct is to create as much as you can in camera and to think about taking a practical route,” explains Muyzers. “On Earth, we’re sitting on this giant sphere, so the horizon has a certain look, which has a lot to do with the way light travels through the air. On Elysium, it’s almost as if you’re sitting on top of the rubber, inside of a bicycle tire. Your horizon drops away from you. We had to conceptually imagine what this horizon, the sky, the depth of the clouds would look like. The vfx team had to take over the production design. Our art department created very detailed illustrations, which looked almost like photos.”

One of the film’s secret weapons is none other than celebrated futurist and designer Syd Mead, the man behind the influential concept art for classics such as Blade Runner, TRON and Aliens. Myd’s sketches for the ring were the basis for the final visuals.

As Muyzers points out, “Syd has a very specific style of drawing angles and circles, the way all the angles crisscross each other is very recognizable. At 79, he doesn’t take on many jobs, so we were pleasantly surprised that he wanted to work on our film. That’s why we wanted to make sure his design lived on in this project. It all led to some highly detailed, high-res images generated by our art department. These were the photos that we showed our vfx artists as inspiration.” 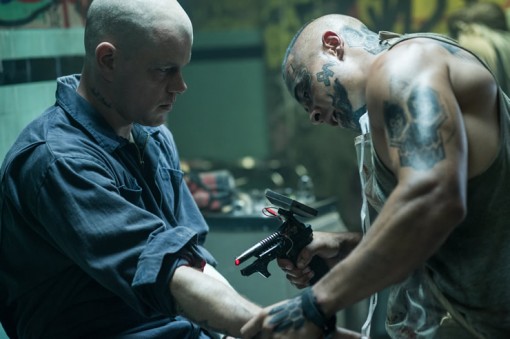 By the way, if some of the aerial shots of Elysium look strangely familiar, it’s because the filmmakers were partially inspired by the pristine mansions and pools of Malibu and the Hollywood Hills.

“Neill showed aerial shots of Malibu to us and told us that he wanted Elysium to look like that,” recalls Muyzers. “As part of the inspiration for the terrain, I shot some helicopter footage and discovered that some of the mansions are kind of like the ones Neill had in mind for the super rich neighborhood in the ring. We were going to use that footage, but we actually ended up using only 5 or 10 percent of the footage, because we went full digital.”

For Muyzers, another memorable aspect of the film, which was lensed with the Red Epic camera and posted in 4K, is its depiction of the brutal droids employed by the officials, which were done using a mixture of live actors wearing grey suits and CG doubles, combined with practical droids. 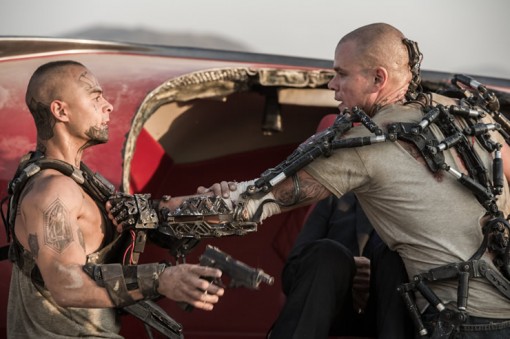 Looking forward to the next generation of visual effects challenges, Muyzers says he believes in creative inspiration versus technological excellence.

“As computers get faster, it’s cheaper to maintain and store data in render farms, but you have to find the right talent that can do the work. It has to be a combination of the talent that’s out there and the technology that keeps on changing and renovating. I remember when we first started talking about building Elysium’s ring, we thought that rendering and managing it would be brutal. But we were able to find solutions and move outside the box, and upgrade our software and hardware—Maya, Houdini or the other rendering software bring new technologies to the market that allow us to have more information to be processed. But in the end, it’s all about the images that the filmgoers are going to see on the big screen. As Neil used to say, it has to look beautiful and real.”

Here are two great featurettes on the making of the film: