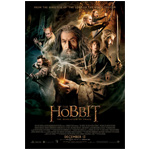 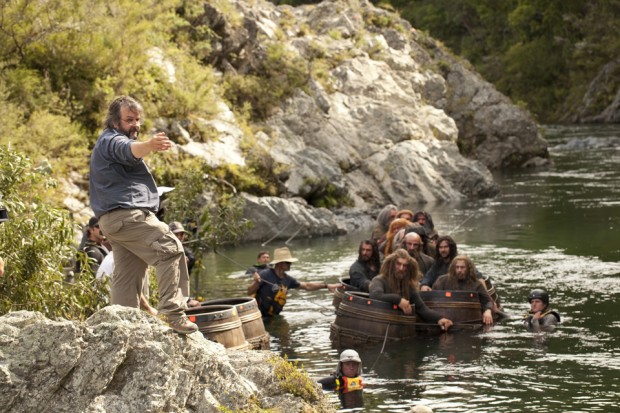 Peter Jackson on set of The Hobbit: The Desolation of Smaug

Joe Letteri, the Oscar-nominated vfx supervisor of The Hobbit: The Desolation of Smaug, discusses the fine art of crafting the dragon, those spiders and other visual treats of Peter Jackson’s epic movie.

Although fans had to wait a whole year to return to director Peter Jackson’s magnificent adaptation of The Hobbit, the second part of the new Tolkien trilogy is packed with so much breathless energy and visual panache that audiences may feel like they never left Middle-earth. As expected, The Desolation of Smaug not only gets us back to the treacherous journey of the reluctant Hobbit, Bilbo Baggins, but it also introduces a delicious selection of new characters and settings—all of which gave the vfx team at New Zealand-based Weta many opportunities to show off their considerable skills.

Of course, as readers of Tolkien’s book know, meeting Smaug, the gold-loving, arrogant dragon of the story is one of the trilogy’s most anticipated highlights. Voiced by popular British actor Benedict Cumberbatch (Sherlock), the beast is described in the book as a vast red-gold dragon, who is first seen fast asleep on countless piles of precious gold, gems and silver, “thrumming came from his jaws and nostrils, and wisps of smoke, but his fires were low in slumber.”

According to Jackson, the filmmakers decided to depict this huge beast as a Hannibal Lecter-like psychopath, with an inexplicable lust for gold. “The very simple thing I had in my head was to make him a hell of a lot bigger than what people would be imagining,” says Jackson. “The one thing that would surprise me is if he lifts his head out of the gold, and instead of his head being two or three feet long, his head is the size of a bus and his body is the size of a 747. That would be scary. So I thought, OK, we’ll go with size. I wanted his size alone to be terrifying for this little Hobbit.”

“The biggest vfx challenge for us was depicting the dragon. We had this huge character that is the centerpiece and Bilbo needs to have this intimacy with him. We need to understand what he’s thinking at all times. Why isn’t he just eating the little guy? Because he is actually enjoying Bilbo’s flattery. He hesitates to kill him because he’s been enjoying this conversation.” — Joe Letteri, The Desolation of Smaug‘s vfx supervisor

As vfx supervisor Joe Letteri explains, “The biggest vfx challenge for us was the dragon. We had this huge character that is the centerpiece and Bilbo [played by Martin Freeman] needs to have this intimacy with him. We need to understand what he’s thinking at all times. Why isn’t he just eating the little guy—he is actually enjoying Bilbo’s flattery. He hesitates to kill him because he’s been enjoying this conversation. We had to depict all of this on a very large a scale. He needs to look scary enough, and you can’t frame that in a two-shot.”

To bring more humanity and real-life precision to the digital dragon, Cumberbatch recorded his dialogue in full mo-cap gear on a stage, directed by motion-capture supervisor Dejan Momcilovic. This was only to guide the animators with a reliable reference point for the creature. Letteri, who received his eighth Visual Effects Oscar nomination for the first Hobbit movie, notes that while a dragon’s face is very different from a human face, the animators were able to incorporate a lot of the actor’s performance into Smaug’s personality. “We had to be very specific with the details, such as the size of the scales around his eyes and how they blend into the texture of the skin and the eyelids.”

Each one of the intimidating dragon’s scales was digitally hand-painted to better depict imperfections and perhaps hint at previous battles, his age and history. “When he’s seen up close, we have to see that his face is covered in scars, whether from battles with other dragons or from his various attacks.”

To create subtle, yet effective windows to Smaug’s soul, the designers opted for a combination of human and reptilian eyes. “We always need to get a good sense of where his focus is, and everything is seen very close-up, so there are many layers of geometry inside the eyes,” says Letteri. “I think one of my favorite aspects of this movie was watching this dragon come alive and really getting a good sense of his personality.”

To craft the film’s close to 2,000 vfx shots, the team at Weta used RenderMan to render, Nuke for compositing, Maya for 3D aspects of the job and various proprietary tools for tasks such as tissue simulation (i.e. the waddle on the skin and the muscles on Smaug’s face) and fluid dynamic simulation for the water in the river and rapids sequences. The team used tools that were initially created to build trees to deliver the complex scene depicting the dragon atop his precious mountain of gold coins.

Another one of the movie’s visual highlights is a meticulously mounted sequence which has the Dwarves escaping the Elf King’s fortress in barrels down some treacherous rapids. “Shooting on water is difficult even at the best of times,” says Jackson. “But for the barrel sequence, as we devised it, we didn’t require a calm river—we wanted actors inside barrels, with the lids off, going down the most massive, deadly rapids you could imagine.”

To stage the elaborate scene, special effects coordinator Steve Ingram and his team built 500hp water jets inside roughly one thousand cubic feet of water within a whirlpool set. Using real footage shot of the Pelorus River and the Aratiatia Dam near Lake Taupo in New Zealand (shot in 3-D on state-of-the-art RED Epic digital cameras at 48 frames-per-second), the vfx team collaborated with the pre-viz team to plan every beat of the characters’ perilous journey down the rapids. Letteri says the final sequence is a challenging combination of digital characters, real environments and water simulation. “For us, it was like the three hardest things to achieve from a vfx perspective coming together in one place. We were constantly changing and fine-tuning the water as the animation was refined. What’s really tough is water simulation as we’re pushing tons of water down these rapids, while integrating the barrels and animations in just the right way.”

Trapped in the Spiders’ Web

Pre-visualization also played a crucial role in staging the action sequences set in the dark and ominous world of the Mirkwood forest. “Everything was driven by the animation,” recalls Letteri. “We asked ourselves, how do we make these giant spiders move interestingly in a 3-D space? So the animation was blocked out in pre-viz. Then we dressed the environment to support the animation. There was this sense of making these creatures scary, not just because of their size, but also because of their speed and total unpredictability. We had to walk a fine line, because they had to have the proper weight of a spider that size, but they also had to be able to surprise both the characters in the movie and the audience with their sudden movements.”

Letteri further explains that Jackson wanted all the scene’s action to take place in the canopy, with the giant spiders using webs to travel through the treetops. “With everything happening in space, we were able to play with the 3-D aspects of the film, but we also had to choreograph the spiders meticulously and figure out where their feet needed to be so that we could capture them as they approach the camera.”

Since the spiders were completely CGI creations hand-animated by Weta Digital, the actors had to fight against stunt performers. Because the performers wore head-to-toe green suits (which would be replaced by the CG characters later), they were aptly called “Kermits” during the production. The actors were also aided by green pads and green sticks which allowed them to swing their weapons in space, pull their blow physically and pretend they were actually making contact with the dreaded arachnids.

With a movie as complex and densely plotted and populated as The Desolation of Smaug, a whole book can be written, detailing its many brilliant visual effects achievements. “I love the fact that the movie allows us to travel through such interesting and different landscapes,” says Letteri. “I am also very pleased with how we were able to bring so much personality to Smaug’s character, just like we did with Gollum in the past. But this time, we were able to bring that to a character who wasn’t human. In the end, it’s about having a good story and creating things that the audience wants to see. It’s not all about the effects, but what the director wants to put on the screen. We’re just getting started on the third movie, and Peter continues to surprise us with new things.”

Warner Bros.’ The Hobbit: The Desolation of Smaug is currently playing in theaters around the world. The movie made $73.6 million during its first weekend at the U.S. box office.