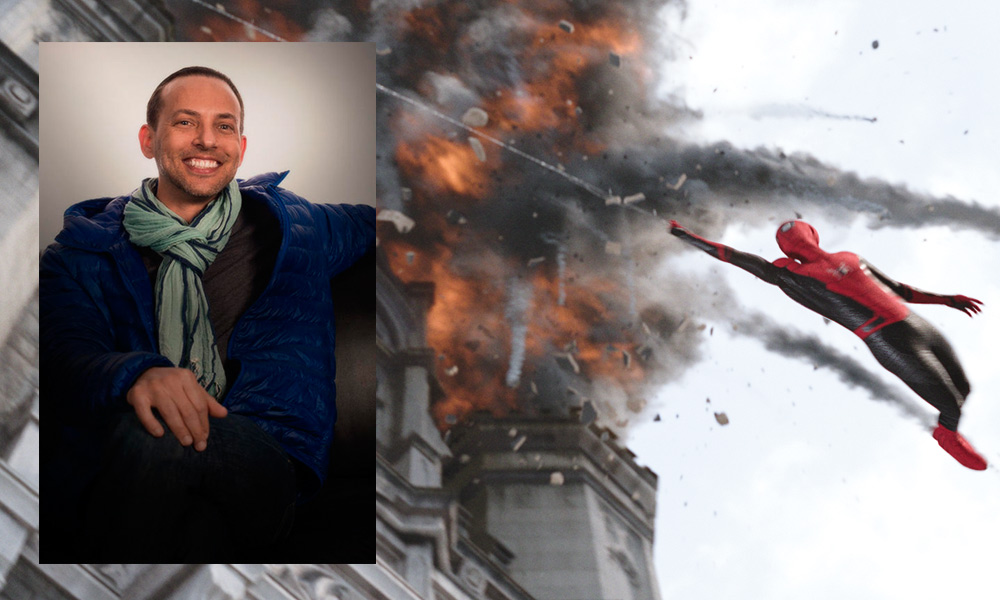 ***This article originally appeared in the August ‘19 issue of Animation Magazine (No. 292)***

When Marvel’s famous web-slinger embarked on his 2017 adventure Spider-Man: Homecoming feature, Theo Bialek transitioned from being a CG Supervisor to a Visual Effects Supervisor for Sony Pictures Imageworks; he served the same role for the follow-up where the action shifts from the hometown of the teenage superhero to continental Europe. “For me, when you think of Spider-Man you typically associate him with New York City,” he points out. “I think shooting on location in Europe expands the setting from what is typical and helps to embed him deeper into the Marvel Universe.”

The visual effects work for this summer’s Spider-Man: Far From Home was far more complex than the previous outing. “Far From Home involved the choreography of more characters each with a bevy of abilities whereas Homecoming was for the most part Spider-Man [Tom Holland] versus the Vulture [Michael Keaton].”

Overseeing the visual effects was production vfx supervisor Janek Sirrs (The Matrix). “Janek relied heavily on reference to help communicate the varied looks throughout the sequence,” states Bialek. “Whether it was referencing plates acquired on set, other films, or online reference, he was always trying to find practical examples to help guide us.”

One of the film’s big vfx tasks involved a fiery creature that terrorizes the city of London. “The hybrid Elemental that Spider-Man and Mysterio/Quentin Beck [Jake Gyllenhaal] battle at the Tower Bridge we knew would be a challenge technically given the size and varied phenomenon models involved,” notes the vfx supe. “The initial design of the Elemental, which we affectionately referred to as SUE [Super Uber Elemental], required large water tentacles rising out of the river several hundred feet into the sky. We spent considerable resources creating simulations we could reuse over the two dozen or so shots. Midway through the production, the design of SUE changed and for a brief moment the water tentacles were cut in favor of having the water elements grafted on to the torso instead. Eventually, the water tentacles made their way back into the design; this time with a molten fire core and lightning crackle added.”

Various intriguing effects elements were also involved in constructing the humanoid character of SUE, which has an additional arm used as a peg leg. “She stood over 80m tall and above her head rose a layer of thick volcanic clouds that eventually transitioned to a large storm layer reaching as high as 575m,” explains Bialek. “Adding to the complexity SUE had several large water tentacles that connected from the volcanic clouds to the riverbed. Inside of these waterspouts fire and lightning could be seen. On her main body rocks would fall and crumble along with lava as she moved, crashing into the already churning river below.” 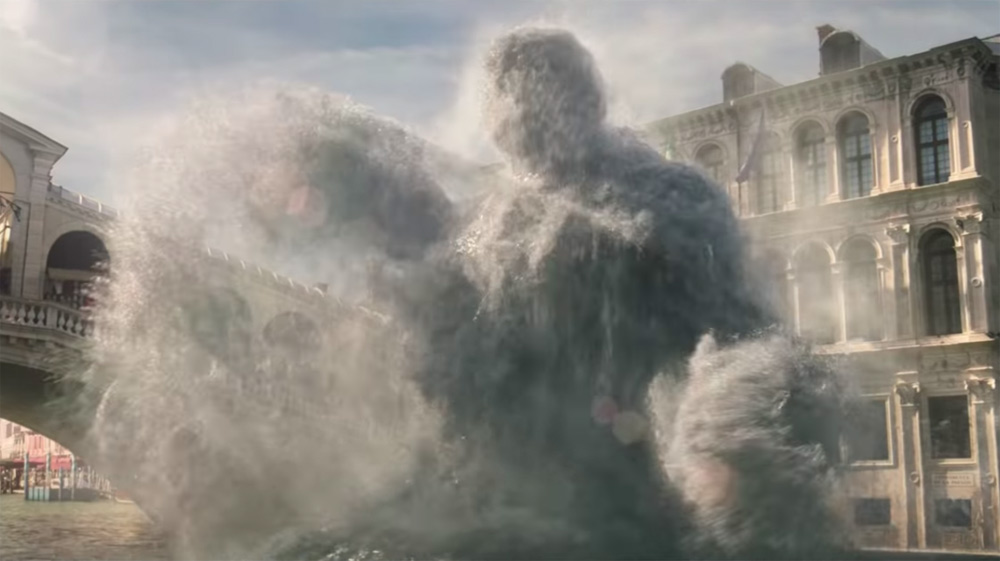 Each shot required multiple fx artists to manage the elements. “The biggest surprise and challenge for SUE was a story change that required us to design a look to her illusion from the inside,” says Bialek. “In early drafts, Spider-Man disabled the SUE illusion when he breaks ‎Beck’s glass helmet device. This eventually changed and instead has Spider-Man cross into the center of SUE where he is able to see the illusion being created from the inside. Our team rapidly prototyped a new look based on earlier illusion tech in the film but scaled up to the massive size of SUE. Adding additional complexity was the requirement that the illusion had to glitch with giant gaping holes, thus revealing the exterior and interior looks within the same shots.”

Another major task involved the Tower Bridge battle, which was a huge challenge given the size of the asset. “At first glance you assume that the bridge is symmetrical east to west and north to south,” explains the vfx supervisor. “Which to some extent it is, but there are subtle differences given the repairs, and uneven wear and tear to the real bridge over the years that give it its real world feel.”

The team’s first pass of the bridge was economical. They heroed out the areas where they expected the majority of the action to take place, spending time adding asymmetric detailing both in the model and textures. Then, they relied on procedural textures and shaders to push the variation in the other spots. “Our initial tests showed this to be successful but as the scope of the action increased, we quickly realized this idealistic approach no longer held,” notes Bialek. “With Spider-Man now swinging all around the bridge we ended up detailing out 80% of the entire bridge surface.” 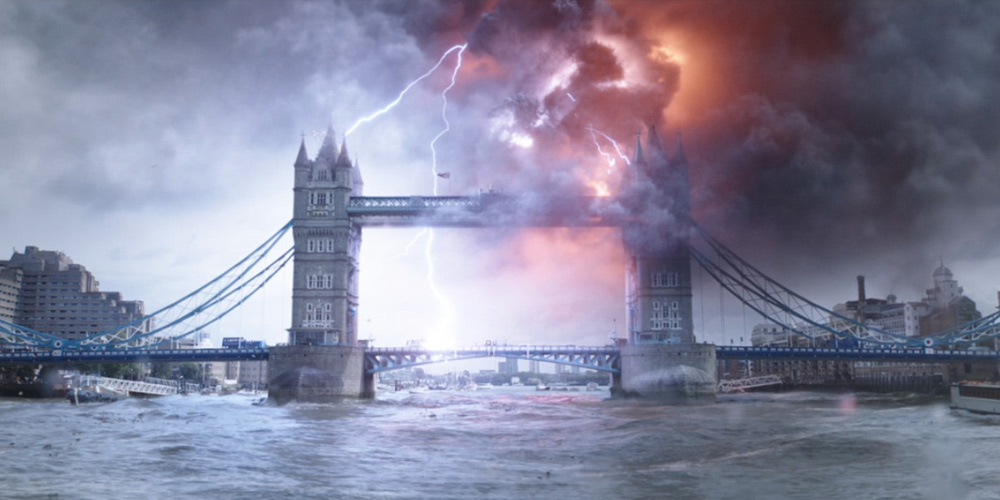 Spidey also has to battle drones in this summer outing. “Initially the drones were envisioned as one type,” reveals Bialek. “This conventional drone armament had three different weapon types: missiles, cannons, and Gatling guns. This type of battle quickly became monotonous as we started to flush out the sequence so there was a need to vary up the drone abilities. These additional capabilities also needed to tie into the logic of the illusions from the earlier part of the movie. Flamethrower and Sonic Drone were added to the mix toward that goal.”

All throughout the project, simulations were required extensively. Bialek says, “The movie turned out to be heavy in regards to cached data… We tried to reuse much of the large-scale water tentacle and clouds simulations for the SUE character. With so many shots requiring explosions from the drone attacks, we also had to reuse our flak and other explosions. There are many shots that required at a minimum five vfx artists at once.”

In addition, most of the 300 plus shots handled by Sony Pictures Imageworks required background and sky replacements. “Everyone one of our Spider-Man shots was either CG or required the suit from the neck down to be replaced with a digital version for damage continuity,” reveals Bialek. “That meant over 110 CG shots and 75 suit replacements in the end. We also had several shots of Beck and the school kids that required the use digital doubles but this use was minimal.”

The project also required extensive asset sharing with other visual effects vendors. “We shared our drone assets with most of the vendors as we were the main house in regards to the asset,” adds Bialek. “Our black and red Spider-Man suit was also shared with ILM and Image Engine. In turn, we received the Stark Jet from Image Engine and Mysterio from Scanline VFX.”

Despite the brutal post-production pace, Bialek says he enjoyed working on this complex superhero adventure. One sequence in particular stands out most of all. “Spider-Man battling the last batch of drones in the walkway as he uses his Spidey Senses to push through the illusion,” he says. “It was such a wild and crazy shot both in choreography and colors design. It was so much fun for the team to put together I know on the big screen it will be all the more impactful!”