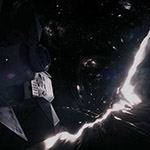 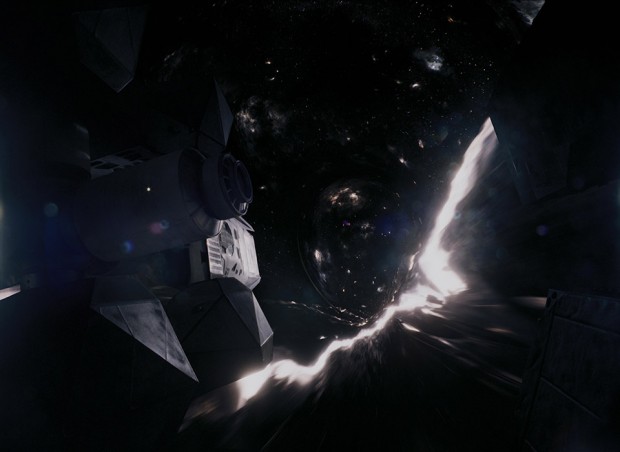 Double Negative goes for realism and a mix of old-school and cutting-edge effects techniques for Christopher Nolan’s new movie Interstellar.

The story follows an engineer and pilot, played by Matthew McConaughey, who leaves his kids behind to save humanity by traveling through a wormhole to find a habitable planet in another galaxy. When it came to wormholes and black holes, Nolan wanted to be more physically realistic than any other film and relied on well-known Caltech theoretical physicist Kip Thorne, who served as a consultant and executive producer on the movie.

“Kip Thorne calculated the light-ray paths around and through wormholes, which are like tunnels that have been punched through high-dimensional space, and around a black hole, which is a three-dimensional sphere that traps everything within it,” says Oscar-winning VFX supervisor and Double Negative co-founder Paul Franklin (Inception). “Space has a fabric to it, which can be observed, and gravity warps space-time.”

Thorne worked with the research and development team at London-based Double Negative, which developed a new renderer called the worm renderer that calculates the relativistically warped space around the black hole and ray-traced all the light paths around it. “When we saw the test versions of the renderers, I realized that we didn’t have to embellish the shots,” Franklin says about the results of the standalone ray tracer.

“We set up the shots in a fairly traditional fashion: Previz, proxy objects standing in as the wormhole. But there was a lot of trial and error because shots in the renderer didn’t behave the way you would intuitively expect. As we approached the wormhole, the object didn’t necessarily maintain its size and weight. The closer you got to the warped space around the wormhole, you would actually shrink in size in terms of how it was presented to the camera. Also, as you got closer, the distortions behaved very unexpectedly. We ran the renders and would see what came out at the other end.”

Limits on the CG

There’s not a lot of CG for Interstellar, 70 percent of which was shot with large-format IMAX cameras. Nolan screened a print of The Right Stuff at Warner Bros. for Franklin and the rest of the crew and Franklin took inspiration in how they built miniatures and shot them under real lighting conditions, getting the cameras to behave naturally around them. As a result, on Interstellar they used front projection on set by taking advantage of Barco projectors. They built large projection screens around the spacecraft windows (the largest was 300 feet long and 80 feet high).

“We threw big images of the wormhole and black hole and star fields and shot in camera,” Franklin says. “There were no green screens. It gave us a great look visually and allowed the actors to put themselves in that space. But we were also creating content moments before it would appear on screen and the cameras would roll.”

The models of the three spacecraft — the Endurance, the Ranger, and the Lander — were done by New Deal Studios and appear in more than 100 shots. There’s a 1/15th scale miniature of the Endurance — which spans 25 feet across — for one of the docking sequences. As they progressed, the results were so good that they took it further, so they also built a one-fifth scale destruction miniature of the Endurance at 45 feet across. These were lighted by New Deal with realistic exposure ratios.

“When we had the key light from the sun, we just used the reflected light from the stage to fill the side of the spacecraft, and were also scrupulous about exposure ratios with the background star scapes, particularly for the sequences set within our own solar system,” Franklin says.

Nolan wanted space to look as realistic as possible, so Double Negative got ahold of a NASA database of stars with correct position, magnitude and color temperature, and built a special star field renderer for determining the size of the points. The renderer had to be spot on and hold up to IMAX resolution. The info was then passed on to the other renderer so that the star fields would be correctly lensed by the gravitational pull of the black hole.

Nolan also wanted to use real locations for the alien water and ice planets and so they filmed in Iceland. For the water planet, which contains 4,000-foot tidal waves, Double Negative created a series of animated waves using basic deformers but then there was painstaking, detailed simulation work on top of it. For the ice planet, they created a lattice effect with CG and matte paintings similar to a honeycomb along with cloudscapes that were shot from Los Angeles to Louisiana with IMAX cameras mounted on a modified Lear jet.

“Everything is grounded in the gritty, hand-held photography of Hoyte van Hoytema,” says Franklin. “You get a level of tactile reality that puts us right there.”