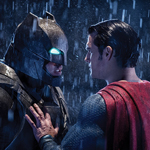 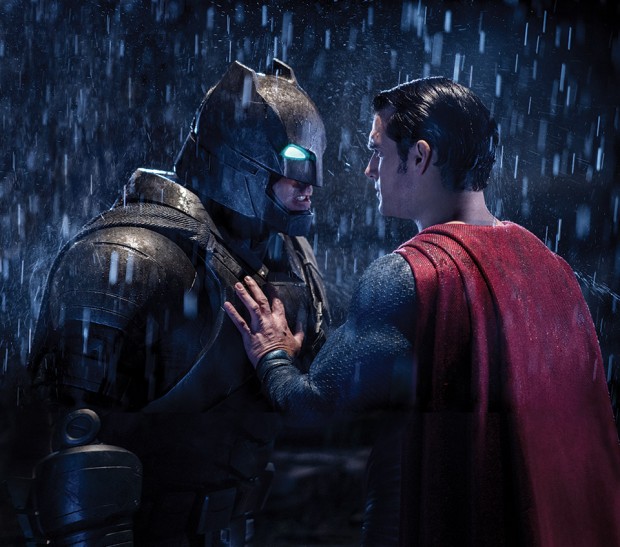 The dream is the most spectacular sequence and includes a post-apocalyptic desert vibe that looks like something out of Mad Max: Fury Road.

In the dream, Batman seeks to find Kryptonite in a world run by an oppressive Superman with a legion of soldiers and flying demons (called parademons and tied to overarching villain Darkseid, whose Omega symbol can be glimpsed in the distance).

“There are little Easter eggs that get populated along the way,” says production VFX supervisor John “DJ” DesJardin.

Shot on the Warner Bros. back lot, the sequence evolved into a trippy bit of phantasmagoria that links the DC universe with Batman’s worst fears about Superman’s god-like powers. It’s nearly all virtual, with effects work divided between Weta Digital and Double Negative and then stitched together. And DesJardin once again makes great use of the “Enviro-cam” from Man of Steel: a Canon EOS 5D mounted on a camera rig that captures a 360-degree panoramic perspective.

“Weta did the intro, with Batman looking at the vista, the fire pits and a large piece of tech that starts to cover the sky,” Desjardin says. “I’ll leave it to fans to figure out what that is. They also did the stuff inside the bunker when Superman confronts Batman and unleashes his heat vision. Double Negative did the roundy round (fight), including the demons. That roundy round was complicated. It was designed by (assistant art director) Damon Caro to be one long fight, but because of the limitations of the technocrane, we had to shoot the fight in three pieces. And because of the limitations of how many people we had, they had to be the stunt players on both sides (the Superman soldiers and the Batman soldiers).”

Under the VFX supervision of Guillaume Rocheron, MPC’s primary task was to create a digital Gotham City, which required months of planning and detailed mapping. To ground Gotham in a distinctive reality, production designer Patrick Tatopoulos created an interior U shape and MPC adapted the architecture and layout to fit the model, using a combination of Hell’s Kitchen and a port and oil refinery in Detroit. MPC’s photogrammetry pipeline was used to fashion geometry and textures for each city section, made possible by rendering with the new RIS version of RenderMan with path tracing.

For the showdown between Batman and Superman, MPC created highly detailed digital doubles, which had to hold up to IMAX resolution, and the fight scenes switched back and forth from real to digital. Also, using numerous 3D scans and photographic input, MPC’s assets and rigging team developed new tools and techniques to maximize the use of the data on the actor’s faces at the highest fidelity under any pose or lighting condition.

The final battle with Doomsday was quite the layout and rendering challenge, due to terra-formed ground sections, destroyed street props along with the rest of Gotham, volumetric 3D fires and smoke fluid caches. The rendering team also developed techniques to handle hundreds of volumetric fire light sources that had to light both the characters and environments accurately in order to photo-realistically render the final act.

One of the biggest demands was perfecting the Doomsday fight. The initial plan was to do it as one shot, but the superheroes were too small in comparison to the 20-foot beast and it was too long a shot to make any editorial changes, so DesJardin went for a “slash and burn” approach modeled on The Empire Strikes Back.

Doomsday’s exposed muscles, tendons and bones naturally required the CG model to be built from the inside out. Both body and facial performance capture were used with key frame animation.

Meanwhile, Scanline participated in several sequences (supervised by Bryan Hirota), including the Batmobile chase. “A challenge in this sequence was the multiple locations that made up the chase,” said Hirota. “We tried to help bring a sense of cohesiveness by adding in details from the previous locations in the background of the current location. Additionally, throughout the entire sequence, we added additional industrial elements: refineries, factories, and smokestacks to help turn Detroit into Gotham.

“For the shot of the Batmobile crashing through the boats and ending up embedded in the large boat, we shot a plate for it using the proxy Batmobile crashing into the smaller boats and the large boat was going to be CG. As we went through post, it became clear that the original photography wasn’t going to be able to achieve the dynamic move that Zack wanted, so we ended up rebuilding the entire environment in CG along with all of the boats and bad guy vehicles.”

According to DesJardin, Snyder made a political thriller, “only with superheroes.”