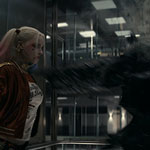 Director David Ayer approached military vehicles, weapons and gunfire with the same kind of authenticity he brought to his breakout feature Fury. And that was his VFX mandate for handling the crucial battle scenes.

“We did a lot of work early on to set the rules for those types of things,” says Robert Winter, MPC VFX supervisor in Montreal. “How do tracers photograph in a film camera at 24 frames-per-second with a wide-open shutter? This allowed us to get our photographic look and motion blur.”

MPC worked on three big gun battles (700 shots out of 1,100); and Sony Pictures Imageworks (in Vancouver and Culver City) handled the climactic fight with the Enchantress (Cara Delevingne) along with the creation of her brother, Incubus (Alain Chanoine), and his battle with a mega version of Diablo.

The first battle occurs when the squad enters Midway City and encounters a group of demon soldiers in a city alley. “That was an interesting sequence from the standpoint that they shot a lot of stunt guys as these demon soldiers in costume, and then we either augmented in CG or added more CG demon soldiers to fill out the numbers,” says Winter.

They were possessed military guys: they ran like humans but were covered in black. “The big creative direction was when they get struck by a bullet, they would shatter into an obsidian-looking rock, so we had these deforming characters that would get hit by a bullet and an arm would break off, and repetitive damage where he’d get hit again and his other arm or head would get knocked off. It was very challenging to take deforming, organic characters and how they perform when intact, destroying them systematically,” says Winter.

The squad used a host of weapons, including Quinn’s bat, bullets, a sword and a boomerang. So MPC created a variety of destruction VFX in Houdini and Kali, the in-house rigid-body simulator. Winter likened the debris to The Matrix but in real-time and without the over crank.

In another battle with the demon soldiers, Diablo, who has forsworn his power for fire creation because of a personal tragedy, lets loose for the first time. Up until then we saw only hints with a dancing flame girl in his hand or the formation of letters in the air. The fire was created with Flowline and rendered in RenderMan.

Another skirmish ensues on a rooftop with a burning skyscraper in the background. There are CG shots of helicopters flying through a canyon of buildings, and the

Joker (Jared Leto) arrives to rescue Quinn armed with a mini-gun. There are nearly 100 shots in the sequence consisting of roto wash, simulation of the smoke coming out of the fires, embers in the atmosphere and dynamic fire that’s always changing.

Also, for a flashback, MPC did extensions of the interior of the chemical plant set where the Joker and Harley romantically jump into a vat of acid. They populated the mechanisms and the vats in CG and added the liquid and swirling colors of purple, red and blue from their melted clothes.

Finally, MPC did the initial Enchantress possession. For this, Ayer didn’t want it to look magical so they achieved a transformation containing a black aura that exudes negative energy. “We used that as a base to form volumetrics around her, which looked like an energy field combined with black smoke,” Winter said.

However, SPI made the Mega Enchantress. “She doesn’t fly through the air or have laser beams for eyes — she has different types of magic (based on technology from 6,000 years ago when she ruled the world),” says SPI VFX supervisor Mark Breakspear, based in Vancouver. “We started exploring Mandelbulbs (three-dimensional fractals) and we only scratched the surface from a mathematical point of view.

“So with Enchantress, other than her facial features, she’s fully CG and has tattoos going all the way inside her body, which we can see because her skin is transparent. And from those tattoos she emitted smoke that poured onto a fractal membrane. The membrane would then generate a fractal fire made up of sharp obsidian pieces, which would then float up into the air and form Mandelbulb cubes.”

As for Incubus, he’s also a CG fractal creation. The challenge was making it liquefy and form together as he takes possession of different people, combining cloth and plastic substances, which merge together into an outer shell from which Incubus bursts forth.

Mega Diablo, meanwhile, becomes a formidable foe for Incubus. He heats him up, liquefies his body and burns a hole in his chest. “It was a massive Houdini project, along with Maya and Nuke,” Breakspear says.