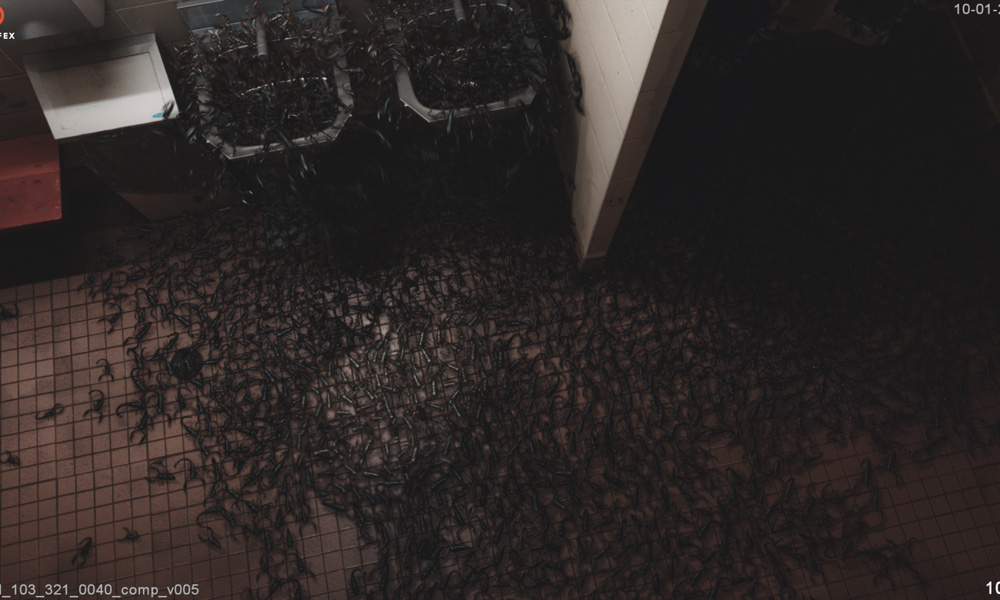 Vancouver’s Artifex Studios provided over two hundred sophisticated visual effects shots for the reboot of fondly-remembered frightener Are You Afraid of the Dark, which returned for a three episode arc on Nickelodeon this October. The series focuses on the evil character of Mr. Tophat (Rafael Casal) and his Carnival of Doom, as he battles against heroine Rachel (Lyliana Wray) and the iconic Midnight Society, known for telling terrifying tales around the campfire.

Artifex was the sole VFX provider for the show, with VFX Supervisor Rob Geddes handling set supervision and even providing test footage shot with a 360 panoramic Ricoh Theta camera that informed new shots that were created for the final show. Artifex utilized a large array of skills from the studio’s toolbox, including matte paint environments, set extensions, magical effects … and literally tens of thousands of CG scorpions.

“This was a tremendously fun project for us, giving us the opportunity to bring a lot to the table both creatively and technically,” said Artifex Studios Founder Adam Stern. “Supervisor Rob Geddes and our whole team had their hands full, delivering terrific shots on a tight timeline, but you can see how much fun and passion they put into Are You Afraid of the Dark by the quality of the work.”

The studio’s work can be seen throughout the three-episode arc, beginning with several character reveals. Graham (Jeremy Ray Taylor; IT), who viewers soon learn is a member of the Midnight Society, is introduced when he is narrowly missed by a hurtling CG football, created to avoid any chance of injury to the actors. Additionally, a creepy ticket-taking clown wearing sunglasses who plays a recurring role is shockingly shown to have no eyes under the lenses.

While the series was shot in Vancouver, the setting is in several rural American towns, which required Artifex to step in with matte painting to augment the physical carnival sets with backgrounds of rolling farmlands. When the members of the Midnight Society travel to their secret hideaway by a rope-pulled boat, Artifex brought the night forest to them to complete the scene. 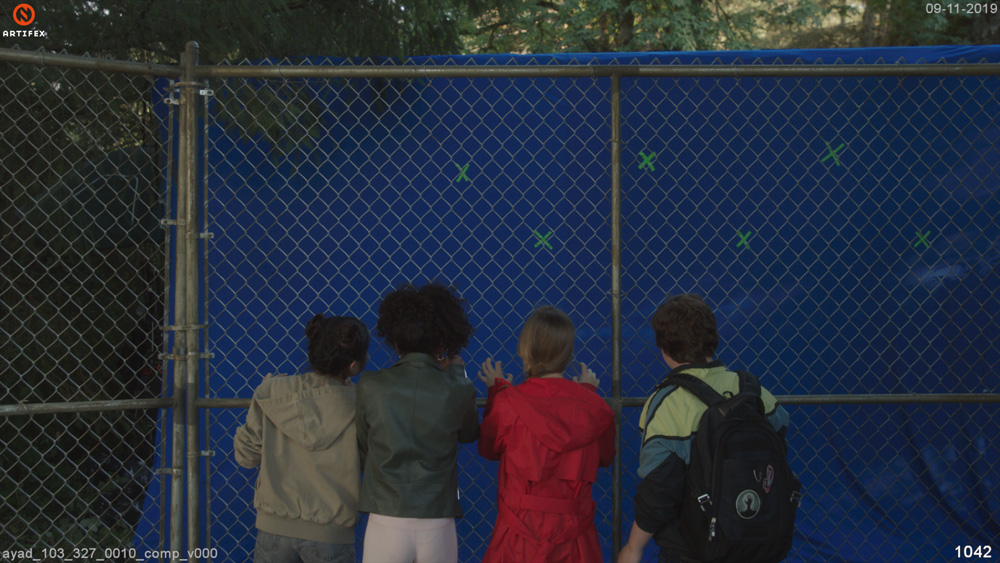 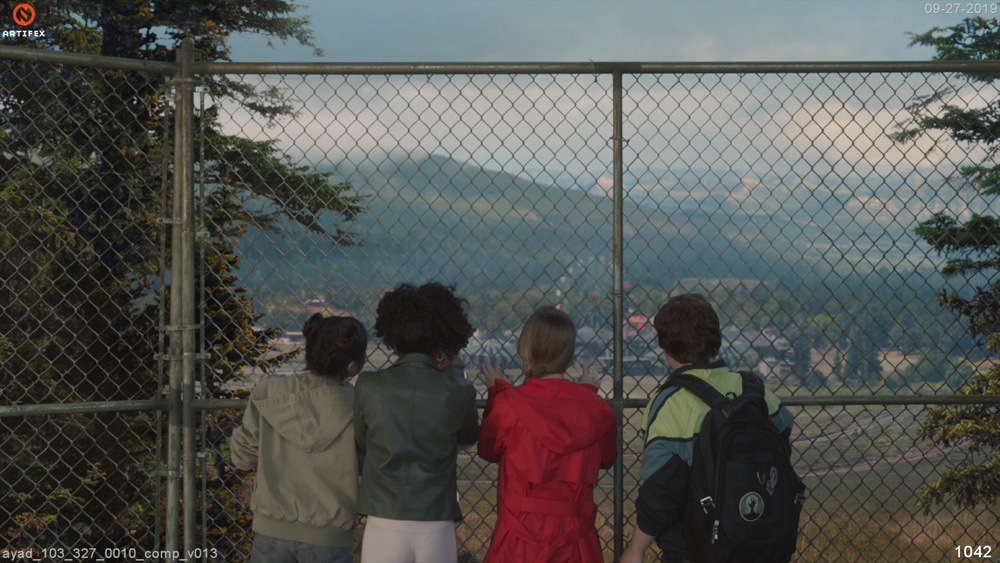 CG assets were created and leveraged in several scenes. In episode two, Artifex brought a self-aware pencil to life, which etches a menacing message to Rachel. Later, in a creepy Tunnel of Love, zombified actors were made to look like animatronic automatons by virtue of cleverly created CG metallic chest plates, including virtual LED lighting and wires. To round out the episode, a character goes missing and the ink on the “missing child” posters mysteriously melts away.

The final episode brought the most robust work in the series. One particular sequence involving a police officer in a rest stop bathroom called for CG scorpions emerging from the sinks, ceiling, toilets and every other opening to trap their victim. The scorpions were spawning at a rate of 600 per second, with over 10 thousand scorpions skittering and pinching in the scene by its finish. Artifex created every scorpion seen in the series, save one shot of a physical specimen (which thankfully wasn’t the one that Mr. Tophat consumes in episode one).

The show concludes with an epic battle, as Rachel faces off with Mr. Tophat — highlighting the “Devil’s cane” from which he draws his power, and for which Artifex added lens flares, distortion and Tesla coils. When the evildoer is vanquished (and with him, his ageless visage) the studio helped age Mr. Tophat 100 years in roughly two seconds, before making him disappear in a cloud of dust. 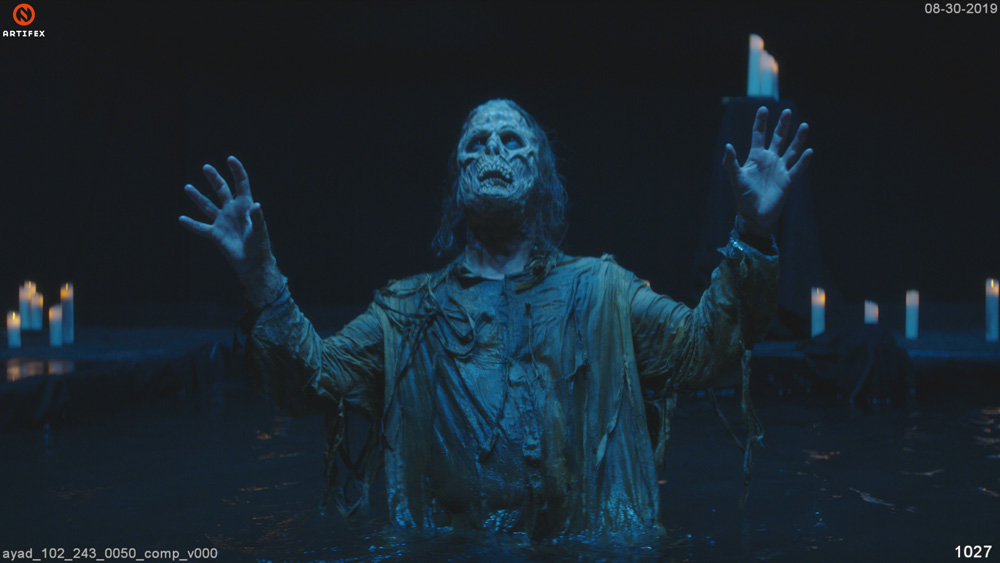 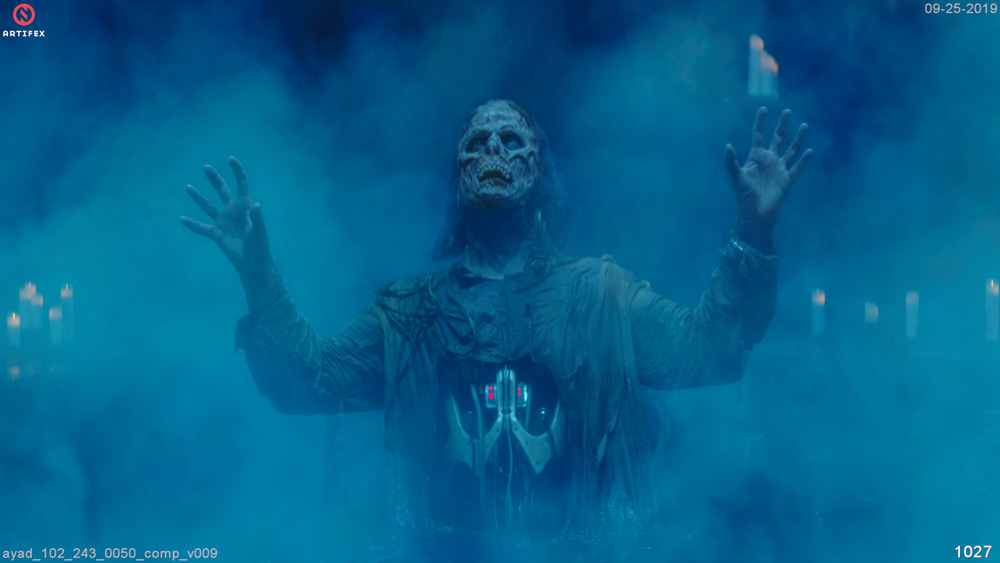 In total, Artifex provided 217 shots for Are You Afraid of the Dark, using 18 artists. Hardware and software applied during the project included Maya / V-Ray for modelling, animation and rendering; sculpting in Zbrush; tracking in Syntheyes; Houdini for FX simulation work; matte painting in Photoshop; compositing in Nuke; scheduling and production tracking in ftrack and I/O in Resolve.

“We Don’t Have Any Rules That I Can Think Of”: Dan & Justin Talk ‘Rick and Morty’ S4
41 Ent. Announces YA Sci-Fi Original ‘Roswell Conspiracies’