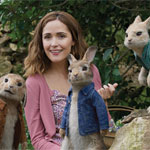 How do you take a anthropomorphic rabbit first introduced in Beatrix Potter’s 1902 children’s storybook and place it in a high-energy adventure for today’s cynical movie audiences? That was the big task facing writer-director Will Gluck and his team of animators and vfx artists at Animal Logic, who handled most of the visual magic showcased in Sony Pictures Animation’s new Peter Rabbit movie, in theaters nationwide this Friday.

In the charming comedy, the beloved pants-less bunny (perfectly voiced by James Corden) and his siblings Flopsy, Mopsy and Cottontail (voiced by Margot Robbie, Elizabeth Debicki and Daisy Ridley) find themselves in the middle of a developing romance between an animal-loving painter (Rose Byrne) and a new neighbor — the uptight MacGregor (Domhnall Gleeson), who doesn’t quite appreciate the cute critters’ regular visits to his vegetable garden.

“I had a soft soft for the Peter Rabbit books because my dad used to read them to me, and I read the books to my kids,” says Gluck, who also co-wrote the script with Rob Lieber. “I had never done a movie with hybrid animation before, and I thought it would be easy. Well, it’s not … but it’s been a fun ride, and I’ve learned a lot from the animators. Hybrid movies are very complicated, and the trick is to make everything look uncomplicated.”

Gluck says he loved the rebellious character of Peter, who was told that it would be dangerous for him to get into the garden, but continued to do what he wanted to do. “He’s both mischievous and heroic,” he explains. “Because these books are read to you as children, you build your own nostalgia around them, which goes beyond the source material.”

The filmmakers made a clear attempt to give this new version of Peter Rabbit a timeless quality. “We wanted little or no references to the modern world,” says Gluck. “We had to do this tricky dance of making it feeling contemporary without having the usual technologies that we have in our lives today. It could be set in the 1900s or now. And we also set the movie in the Lake District (northwest region of England), where time doesn’t really affect much. Basically, we tried to have our cake and eat it, too!”

Of course, like all of today’s modern hybrid movies, the biggest challenge was how to make the CG-animated characters — in this case, Peter, his three sisters, cousin and an assortment of other lively animals wearing beautifully crafted clothes — interact naturally with the film’s main live actors Rose Byrne, Domhnall Gleeson and Sam Neill (playing the MacGregor Senior). “We had to make two movies, really,” explains the director. “First, we filmed the live-action portion, which took us about 12 weeks. Then, it took us about 11 months to do all the animation, which is a really fast schedule for a movie like this.”

The film’s visual effects supervisor Will Reichelt (Aquamarine, Sucker Punch) says Gluck’s amazing comic sensibility makes the whole project stand out. “Will is such a joke factory,” he notes. “He really put his own stamp on the project and made the film appealing to a broader audience, not just the younger ones.”

After spending the first year on the project working on the design and development, the team began to construct the sets in the Centennial Park in Sydney. “They actually built the cottage, both as exterior and interior,” says Reichelt. “When McGregor is looking through his window into Bea’s house, everything is real. That was the principle, for that to have as much spatial reality as possible.”

Rascal with a Cause

One of the most complicated sequences involved Peter’s highly physical fight with McGregor, which demanded the highest level of interaction between man and rabbit. To prepare for the scene, which lasts no more than two minutes, Reichelt and his team did a lot of prep work. “Our stunt coordinator designed the fight with extreme precision,” he notes. “Since we were making a movie for children, we had to be extremely sensitive so that the fight wouldn’t be too aggressive. We also needed to work out a series of moves that would be achievable and would look right on the screen.”

According to Reichelt, Gleeson was a great sport about the whole thing. “He completely threw himself into the physicality of the performance,” he recalls. “He was punching himself in the stomach and throwing himself on the ground and against the wall. For a couple of shots where Peter is shoving his feet against his nose, we had someone with a blue stick pushing it in his face, so we could get the right indentation on his face.”

The animation process was also quite intricate. The Animal Logic team created a digital double for the actor which they could move in 3D space. Because Gleeson’s character had to push his fingers deep in the rabbit’s fur, there had to be a real strict synergy between the animation and the live-action fight. “We really need to have this accurate interaction and be really careful about how the CG characters were moving.”

The animators used basic Maya 3D tools across the board, Nuke for compositing and proprietary Animal Logic tools such as ALFRO for fur and grass, and Weave for the clothing. “Weave is a system that uses essentially overlapping curves and displacement shaders to create the look of clothing,” notes Reichelt. “You lay them out on a UV map the say way you would lay out a sewing pattern and stitch that together. It’s quite intuitive: Each curve is essentially representing a thread, then you shade them and get the cloth look. That’s how we created Peter’s jacket and the other clothes worn by the animals.”

The film’s animation director Rob Coleman (The Mask, Star Wars: The Phantom Menace and Attack of the Clones, The LEGO Movie) joined the project about a year ago, after wrapping work on The LEGO Batman Movie. He says early on the process, Peter’s animation was less expressive, but the performances by James Corden and the actresses who voice his siblings made a huge impact. “I always have the actors videotaped, so we can show them to the animators for inspiration,” he says. “James and the three actresses who voice Flopsy, Mopsy and Cottontail really helped us get the visuals right. We didn’t think we were going to be animating their faces as broadly at first. The rabbits walk on two legs at times, but we wanted them to be more naturalistic. But as the performances evolved, we could lean in some more.”

Coleman, who has been nominated twice for Oscars, compares Peter to Rocket Raccoon in Guardians of the Galaxy. “We wanted Peter to live in the human world the same way Rocket lives in that universe,” he notes. “We decided that Peter would walk on two legs, but then we realized that he couldn’t run as fast, and it just wouldn’t look right when he’s being chased by Gleeson’s character. So we studied real rabbits, and came up with beautiful run and walk cycles. We did absolutely naturalistic runs for the rabbits. Audiences know that rabbits don’t talk or walk on two legs, but they are willing to suspend their disbelief. If you do everything right, they are happy to go along for the ride.”

The film’s director says he learned some big lessons from the Peter Rabbit experience. “I know now that you can do everything in animation, and that’s not necessarily a good thing,” Gluck notes. “Just because something is achievable doesn’t mean it can live in the world you’re making. We had to pull back in many instances. But our job was to keep things real and grounded in this movie. Everything that the rabbits did in the movie was under the physical constraints of the natural world. I am not sure if I will jump right into doing another hybrid movie next, but I know that I’ll definitely use more visual effects in my movies in the future.”

More importantly, Gluck hopes that audiences will fall in love with Peter and his sisters as much as he and his team did. “There’s a scene towards the end of the movie, which is an incredibly emotional scene,” he says. “You see Rose Byrne’s character and Peter put their foreheads together. There’s this close-up of Peter’s face, and the artists did such an amazing job. You feel such great empathy for this character, and you completely forget that this is a computer-generated rabbit. I never thought we could have achieved such a scene.” 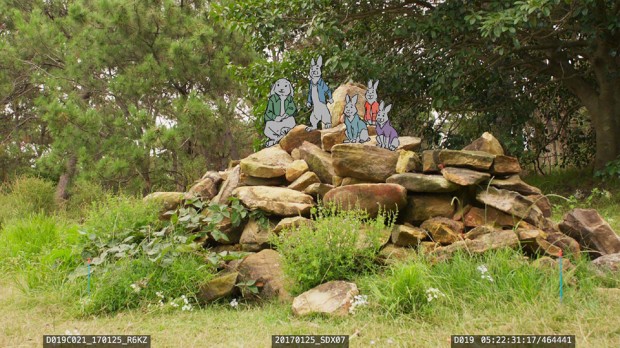 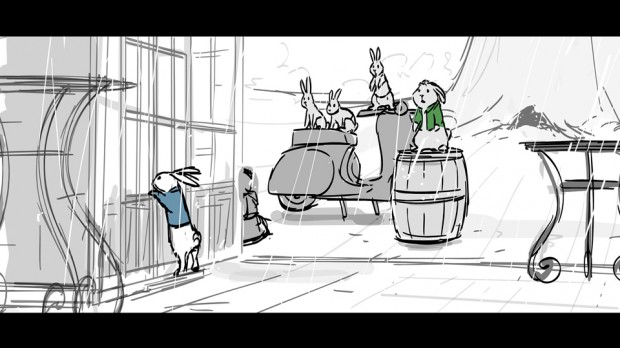