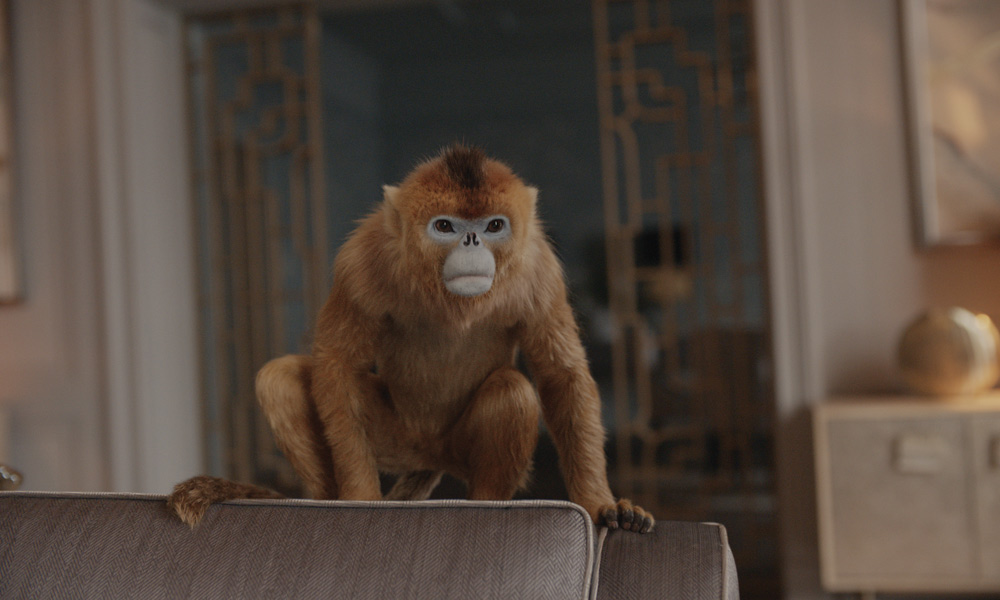 Back in 2007, the dense, richly imagined world of author Philip Pullman inspired the feature The Golden Compass. Pullman’s alternate universe is a place where the digital revolution has never taken place, and humans are connected to their souls in the form of a daemon animal. Last month, a splendid new adaptation of the author’s best-selling trilogy His Dark Materials (of which The Golden Compass is the first book) debuted on HBO and BBC One.

To bring this alternate world to life and to deliver the first season’s over 2000 visual effects shots, the producers reached out to series VFX supervisor Russell Dodgson (Mars) and exec VFX producer James Whitlam (Christopher Robin) and the team at Framestore, which was also part of the Oscar-winning team responsible for the original Golden Compass feature. 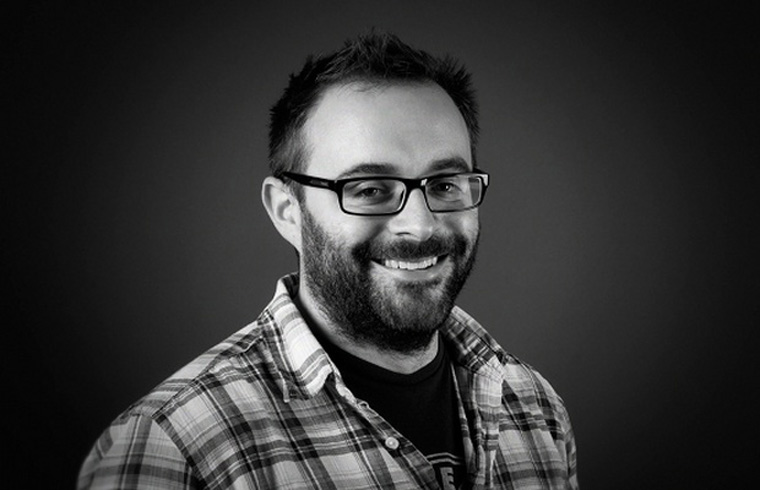 Framestore London and Montreal produced the vast majority of the creature and environment work, with Framestore Pune doing some paint, roto and compositing.

“Framestore is uniquely positioned [to handle a television production schedule] because we’ve got an amazing creature pipeline, and some of the best visual effects artists and animators in the world,” notes Dodgson. “I was fortunate enough to have a lot of those individuals on the show. In terms of the quality, that’s where the clarity of vision comes in, knowing the characters inside out and the production having the trust in us that we could efficiently get a good result.”

Framestore was brought late into the production process, with Dodgson suggesting a major change in regards to the daemon called Pantalaimon (voiced by Kit Connor) who is spiritually connected to the heroine of the story, Lyra Belacqua (Dafne Keen). “In the book, Pan probably takes on 35 or 40 different creature forms, and I was adamant that we had to reduce that number down to eight,” reveals Dodgson. “We needed people to visually fall in love, understand and learn the mannerisms of the character. The only way you can do that is with screen time.”

It was important for audience members to never lose track of Pan as he takes on different animal forms. “There was always this risk of not understanding who is who,” Dodsgon explains. “We made sure that Pan had a dominant white property to him, so he’s an ermine or Arctic tern or Arctic fox or magpie or a pine marten, which has a white chest There was a bit of connective tissue through those characters. The other thing as well is the proximity to the person and the energy of the animation.”

Earlier on, a couple of rules were established for the world’s daemon transformations. “We never physically show a daemon changing from something small to something large or vice versa,” says Dodgson. “It’s more important that the suspension of disbelief is maintained rather than try to do something that is going to look rubbish on screen. We went from a magpie to an ermine or a magpie to a pine marten quite a lot, because we could fold the wings to create a complementary silhouette and foreshorten the daemon with camera angle, so it would take up the same screen space of the daemon it was going to. Then we would make those transformations happen through movement so there was a flow to them. If we wanted to transform from something large to something small, then we would do it off camera because, hopefully, at that point it is just part of the fabric of the show.” 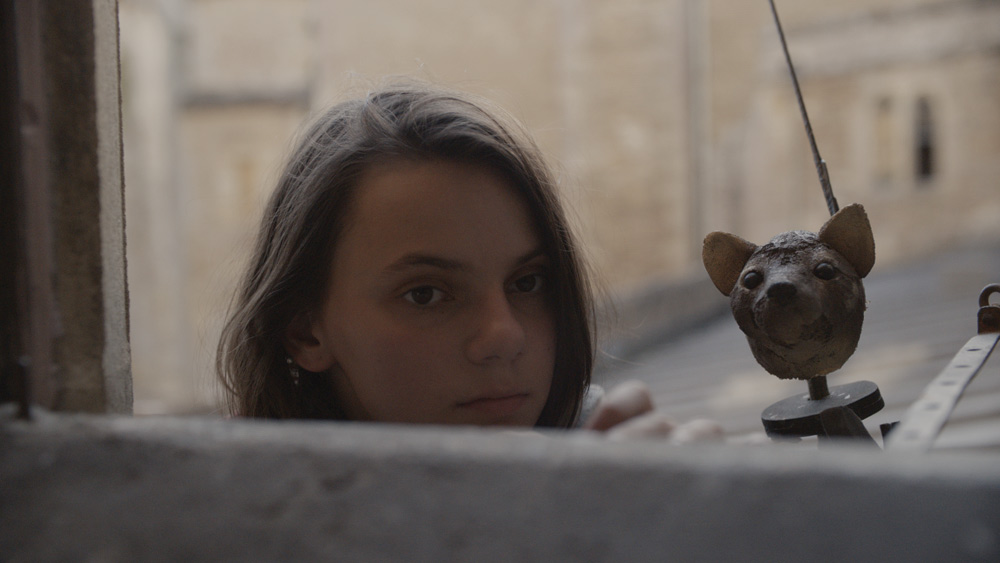 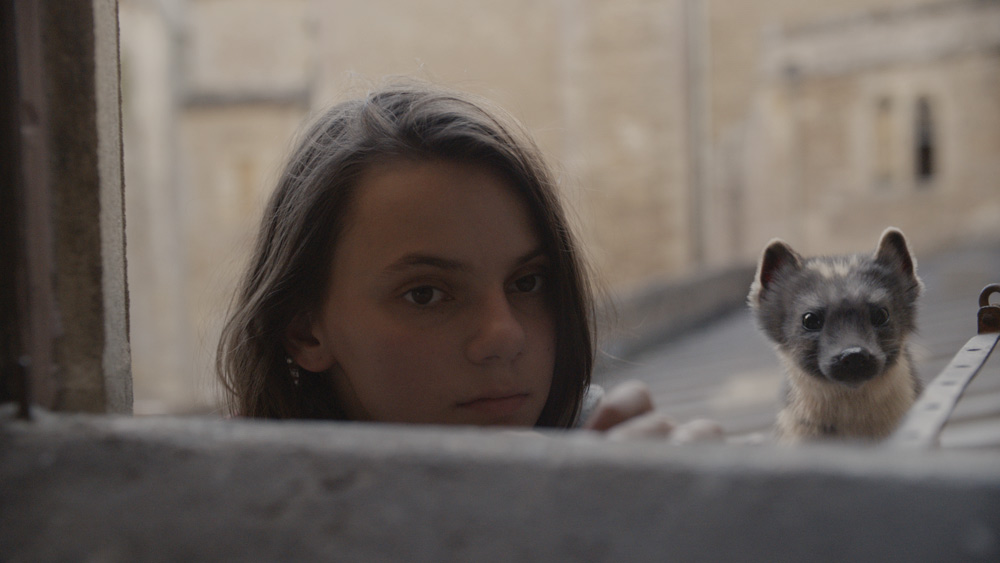 The emotional state of the series’ young heroine, Lyra, is reflected in the actions and behavior of Pan. “There’s a scene where Lyra is going to jump out of a window and go do something,” explains Dodgson. “If Lyra is in tune with herself, she and her daemon will jump at the same time. If Lyra is feeling truly bold inside, then Pan will jump first. If Lyra is acting brave but inside is scared, Pan will hang back. It’s about trying to use the daemons to offer an extra depth or understanding of the character’s internal emotions, rather than just animating an animal in a shot.”

It should be mentioned that the series’ daemons also have the ability to speak. “We decided to keep the physicality and structure of the animals’ faces the same as they are in nature,” says Dodgson. “Then, what you do is lean into the physicality and performance.”

The VFX artists also had to remove some of the more animalistic traits of the series’ daemons. As Dodgson explains, “Daemons have a human consciousness. It’s interesting to look at reference of an animal moving around and being its natural self. In regards to the rabbit, we decided to take two thirds of the sniffing but to keep the animation of the ears twitching, because that still felt in character for curiosity or inquisitiveness. The process of being reductive with the creatures was important. That last thing you do is ask, ‘What do you add?’ For Hester [daemon for Lee Scoresby], we added more blinking because Lee [Lin-Manuel Miranda] blinks a lot when he gets surprised or is asked questions.” 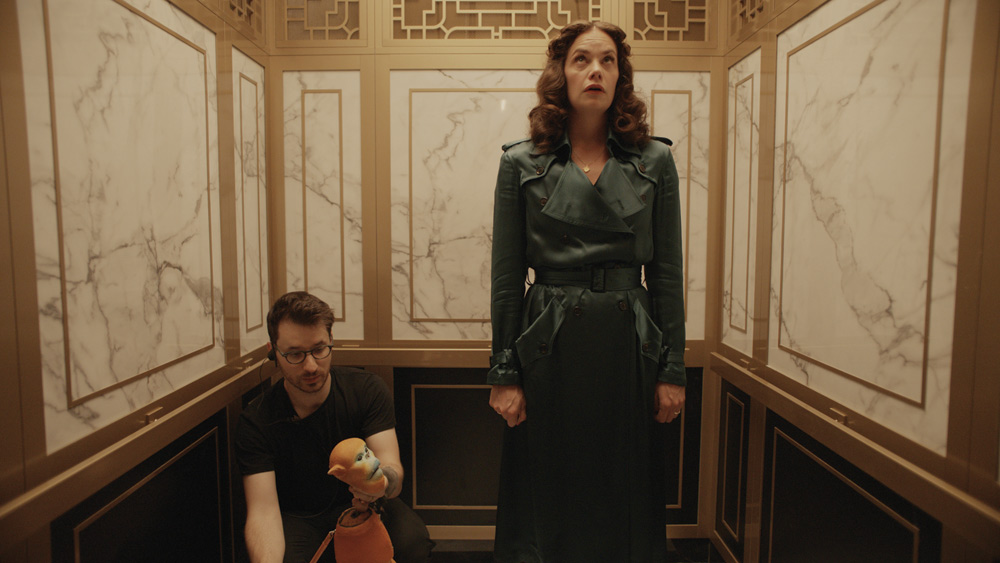 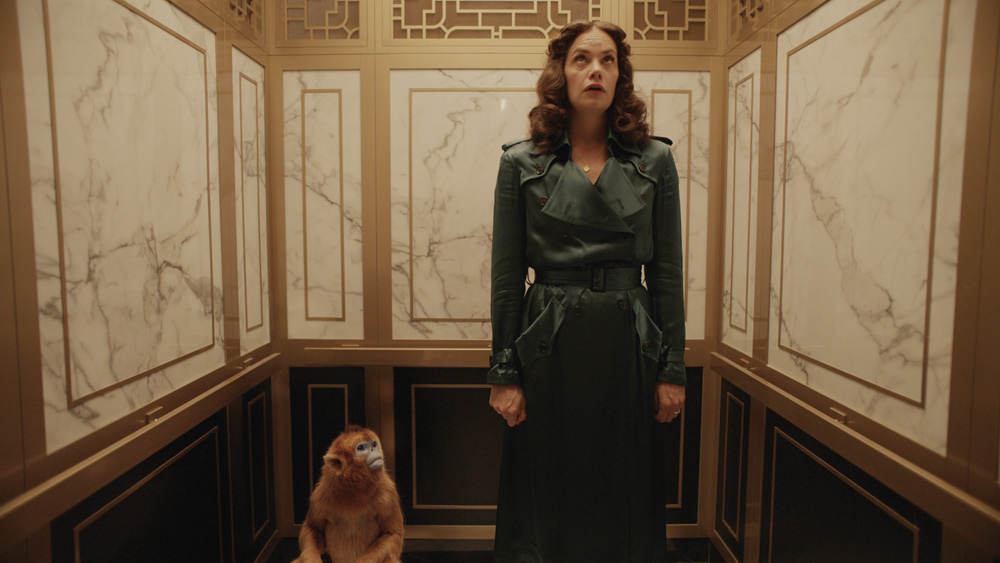 Enabling the 1,000 shots for the daemons and 385 of the bears was the on-set puppeteering methodology. “It was important to make sure that we got what was needed without completely destroying the flow of the shoot,” notes Dodgson. “Rob Duncan [Mary Poppins Returns], our on-set VFX supervisor, and I worked out our methodology — which was blocking out with the daemons, shooting a puppet pass, taking the puppets away, shooting a clean pass and getting our references. We were getting clean plates and passes from day one. The only time we kept the puppeteers in camera was when the performers did so much better with the puppet there, whether it be the eyelines or emotion.”

HDRIs, grey balls and Macbeth charts were utilized to capture correct lighting references, and sets were LiDAR scanned. “We would use the LiDAR and project the HDRIs onto that set to get accurate lighting setups. The metadata from the camera was piped into our setups in Nuke; that allowed us to have the correct focal distance and depth of field in our shots. We would artistically augment on top of that or correct where it wasn’t quite right.” 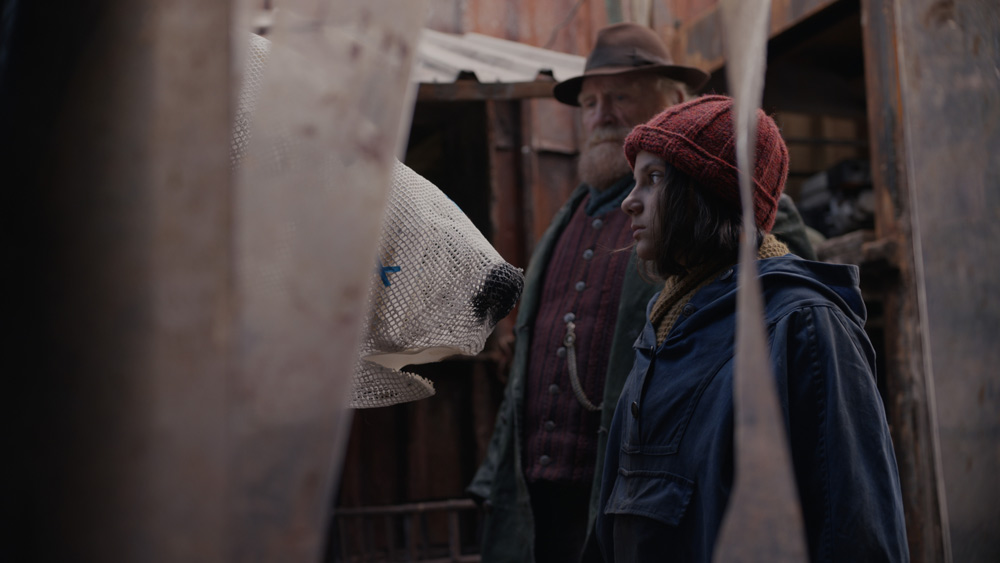 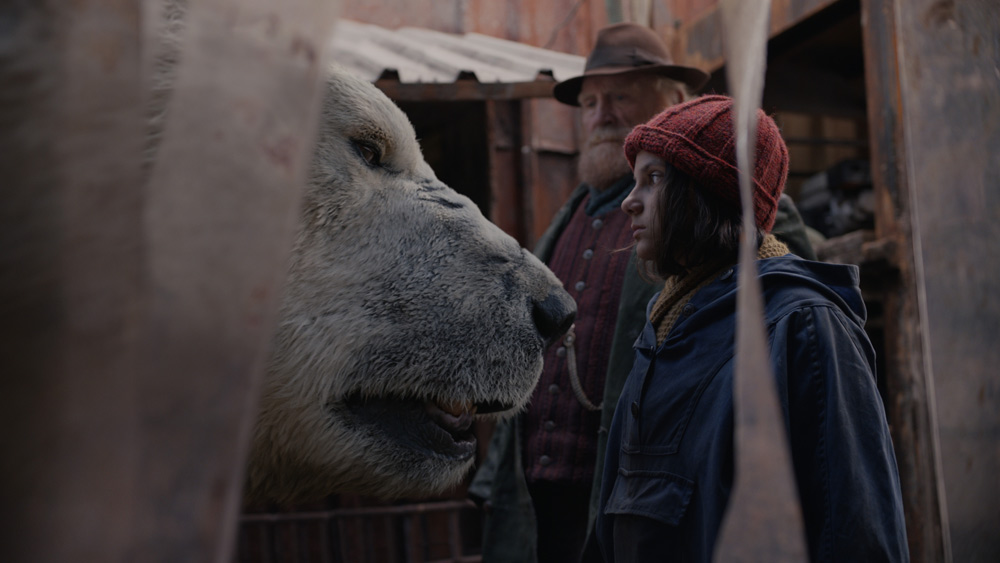 Dodgson says he started the bear fight scene by wrestling a stuntman for two hours with a large group of people filming the action on their mobile phones! “We worked out a basic outline of the fight, sent that over to the animators in Montreal and gave them some references from nature,” he adds. “Then, they sent back some suggestions and it was tweaked until we had a good outline for a scene. Painting Practice and Dan May, who provided the previz, post-viz and concept art for the show upfront, had built a version of the bear palace in Unreal. Framestore then took their animation and put that into the set. Our director, Jamie Childs [Doctor Who], did a virtual camera shoot to work out roughly what we were going to be doing. A full-size practical set of the bear palace was built.”

As Dodgson points out, the augmented reality application Vanishing Point allowed the team to attach an AR sensor in front of the camera that would feedback to Unreal. “In Unreal, we would register and align the set and animation with the real space,” he notes. “Then in the viewfinder, the camera operator could see the bears live-composited over the real set in real-time. We used that to shoot the plates needed for the sequence. In addition, we also used various puppets rigs to help when we wanted to do something more ad hoc or spontaneous that wasn’t prepped in VR. We used high and low tech solutions to get us through the show.”

His Dark Materials is produced by BBC Studios, New Line Cinema and Bad Wolf for BBC One and HBO. The series will continue to air on HBO through December. A second season of the show began filming even before the series debuted. 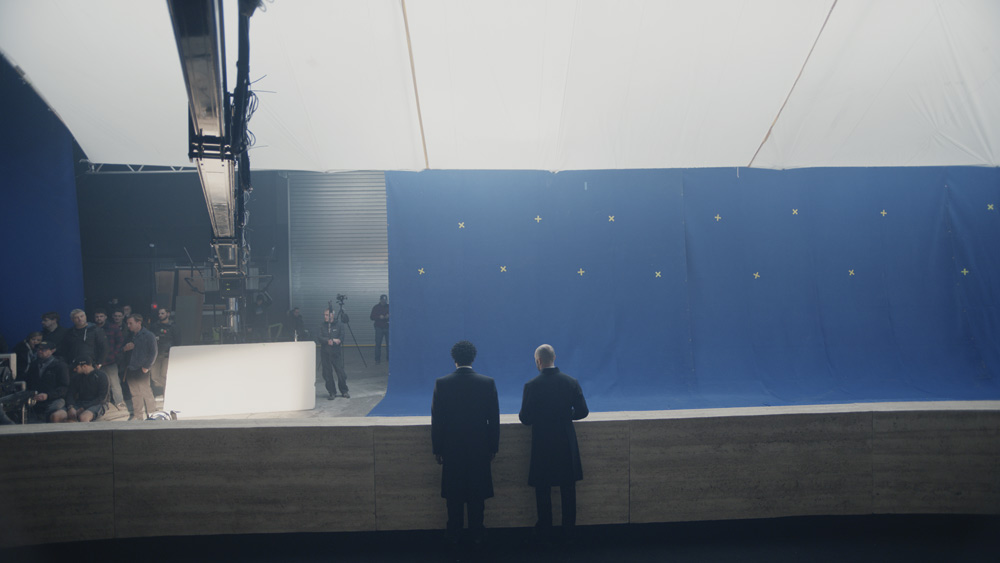 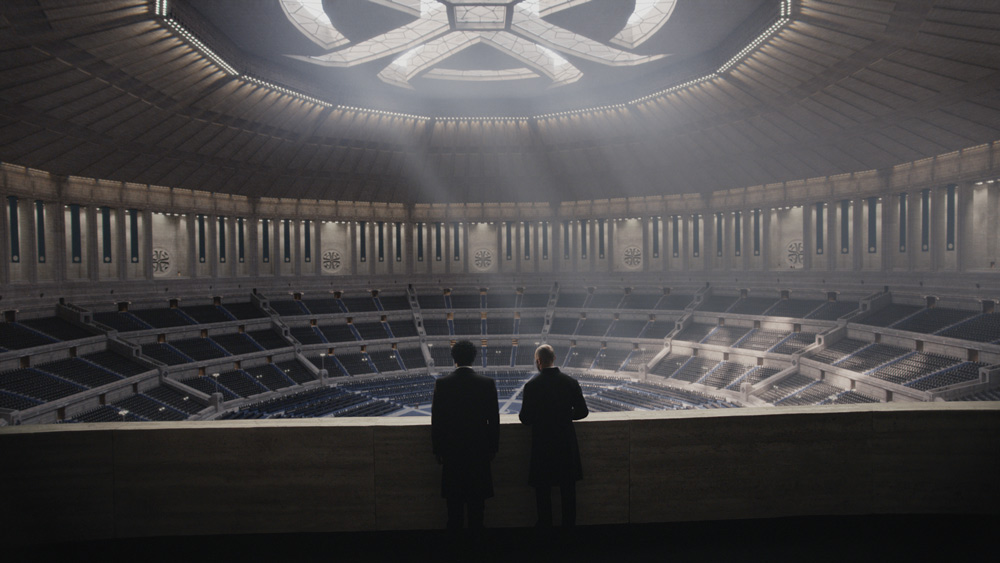