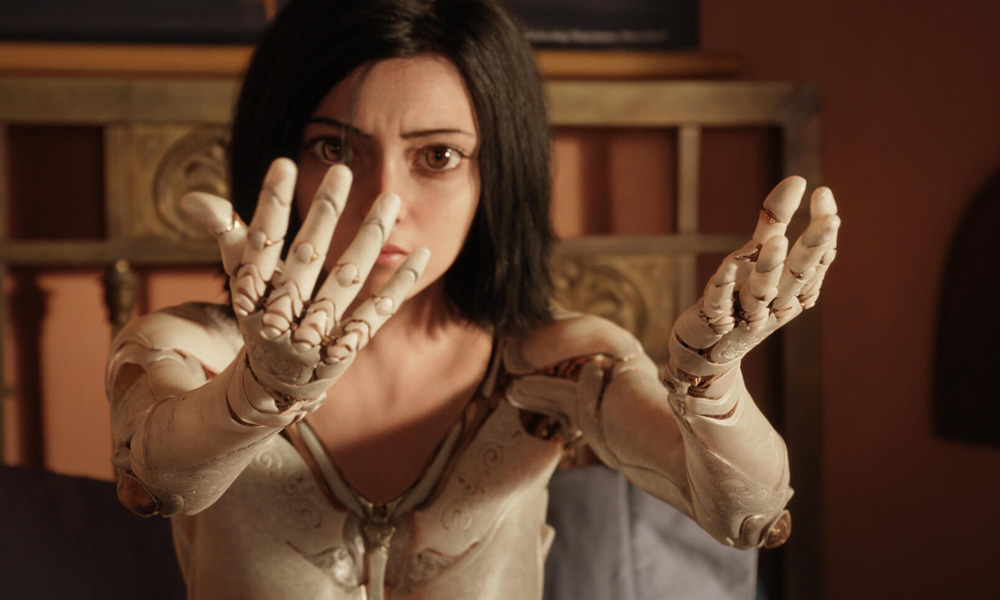 When James Cameron decided to produce and direct a series of sequels for Avatar, his adaptation of Yukito Kishiro’s manga about a cyborg suffering from amnesia in a futuristic post-apocalyptic world was put in limbo. But that was until a luncheon conversation resulted in him entrusting friend and colleague Robert Rodriguez (Sin City) with bringing Alita: Battle Angel to the big screen.

Rodriguez, who is known for being a one-man production crew responsible for directing, writing, cinematography, composing, editing, sound design and visual effects, was the perfect man to handle the $200 million budgeted movie. To create the film’s photorealistic CG-anime protagonist, the hybrid cyborgs and the expansive environment, Rodriguez relied on the technical visionaries at Weta Digital.

“When I came onto Alita: Battle Angel, my biggest worries were the enormous environments,” reveals Weta Digital vfx supervisor Eric Saindon, who received two Oscar nominations for his work on The Hobbit trilogy. “However, Robert shot it in a way that the cities were not as big a deal as I thought they were going to be. The major concern turned out to be getting the performance of Alita to come through and avoiding the uncanny valley.”

The key in doing so involved being as true as possible to the performance capture provided by Rosa Salazar. “The first thing we did was to create a digital double of Rosa. You get every eye dart and twitch of her face. Rosa has an amazing ability to move her face in ways that we didn’t think were possible,” notes Saindon. “We used two cameras for the facial rig. We were able to get even more muscle movement as well as interpolate more than we have ever had done before. But it is still never enough. The little subtleties in the frame that a trained animator can spot, computers will never learn, as they’ll always think it’s noise.”

Eyes on the Prize

Large eyes, which are a signature visual characteristic of anime, were incorporated into the character. “Even though the size is different, we still use the shape of Rosa’s eyes,” notes Saindon. “With the bigger eyes it’s easy to go to a doll. We did simulations to get the right water movement on the meniscus in the caruncle. The limbal ring was modelled into the iris itself. We’ve used Houdini to procedurally model proper irises. Each eye, I believe, is almost a million polygons.”

The film also demanded variations be created within the different versions of Alita, in particular for the alabaster body created for her by Dr. Dyson Ido (Christoph Waltz). “Cyber Girl had 35 different variant levels. You can use a base level and add on top of that. In the ‘Underworld’ sequence, Alita gets in this fight with Grewishka [Jackie Earle Haley] where she gets smashed and her leg cut, rolls on the ground, and is behind a pillar when it explodes. All of those moments became a different variant of Cyber Girl and we had to track them throughout the process.”

Altogether, 8,000 pieces needed to be made for Cyber Girl. “Robert wanted the alabaster to have subsurface depth and translucency, so when light comes through you see the different patterns and the way it was created,” states Saindon. “I was amazed how hard it was to get her hands to work. We made them to match Rosa’s finger lengths properly and hit all of the joints exactly. There was a lot of back and forth. We had to back out to Los Angeles in order to scan Rosa’s hand again because the first one didn’t have enough detail to it to get her muscles exactly where we needed them.” 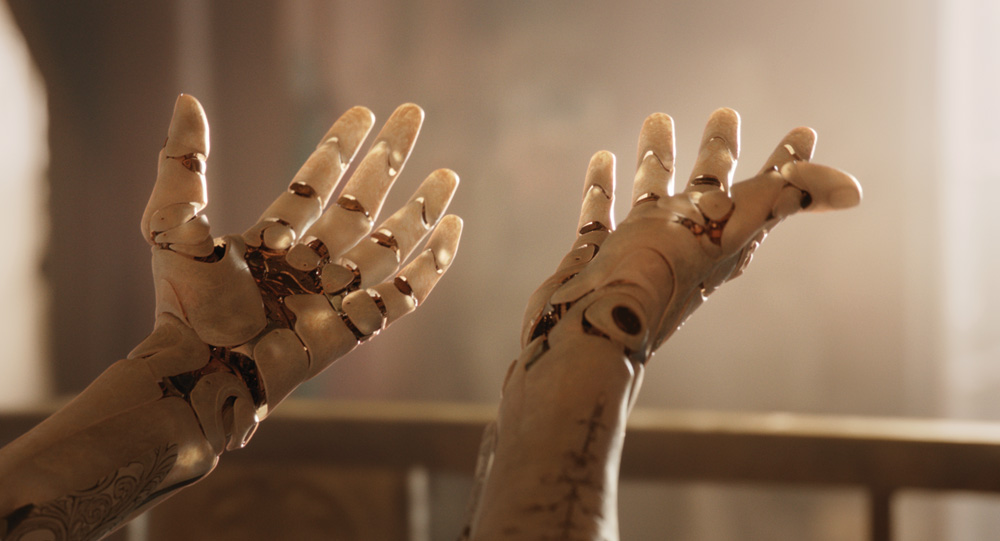 Less complicated was constructing the muscle-driven Berserker body. “It has fibrous materials, electronics, gels and metal plates,” notes the vfx supervisor. “They wanted to the gels to have a depth to them but not feel hollow. We filled the muscles and arms with fibrous strands.” Lighting was difficult. “As Alita walks through a room, her arms go from shiny to dark depending on what reflections we are seeing. We ended up having to play with the metal types in certain scenarios to bring more of diffused mixed into the reflections.”

The film also required a robotic body for Alita, as Ido builds a Pro Motorballer body for the female protagonist. “It’s got to look cool and high tech but also fit into Iron City,” notes Saindon. “The design went back and forth. It feels lot like the Pro Motorballers but more high-end as Ido put more care into it. For us it was straightforward. It’s a robotic body with a human head.” 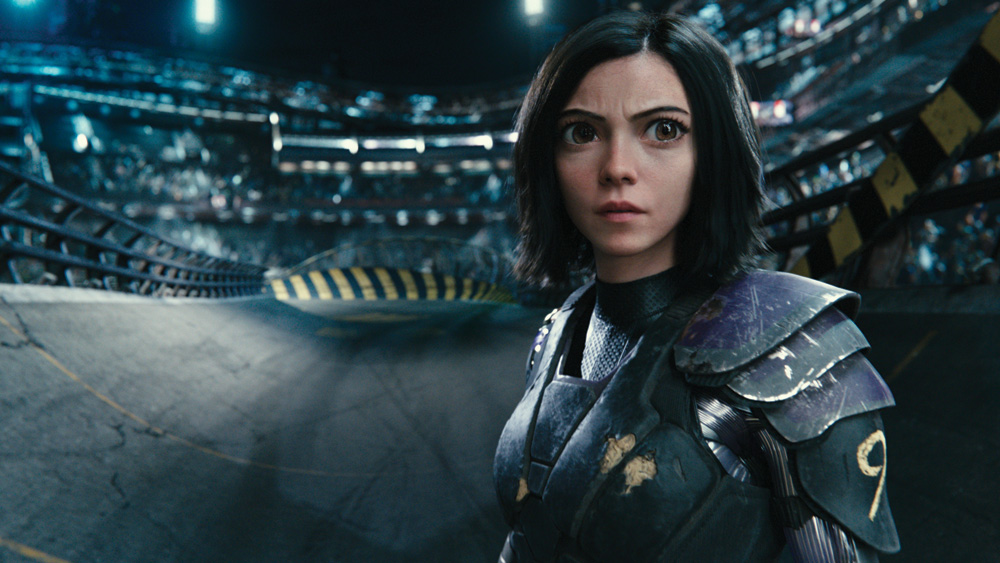 Not all of the cyborgs in the movie are completely CG. “We have a lot of characters in the background like Zapan, where we kept the face of the actor Ed Skrein, and then replaced the back of his head and the whole body,” says Saindon. “They’re supposed to be human but with cybernetic bodies. Some of the Motorballers have become more cyber than anything else. For McTeague [Jeff Fahey], in the Kansas City Bar, we kept his face, legs and replaced one of his arms. We tried to keep in mind that if replacing parts of your body for cyber you wouldn’t do the whole thing at once.” 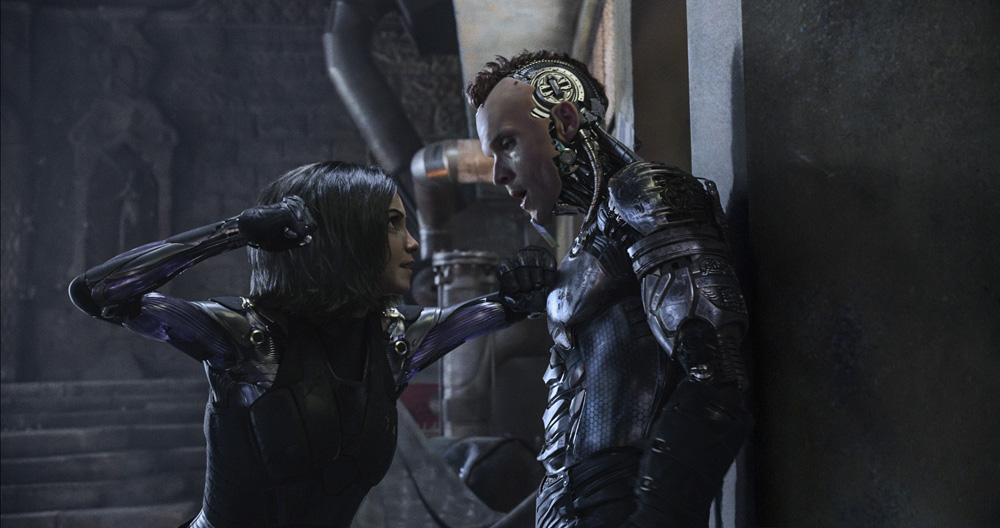 Most of the action takes place in Iron City, which lies beneath the aerial urban dwelling of Zolum. Saindon recalls, “Even with the two blocks that we had in Austin, Texas, every building had to be extended up and out. Robert didn’t hold back on putting the camera wherever he wanted and we didn’t want him too. We did Simulcam to extend out the city live so Robert could frame Zolum in the shot.”

A massive area of discarded waste from Zolum known as the Scrapyard surrounds Iron City. The production designers built the set based on the images first seen in Yukito Kishiro’s graphic novel series Gunnm, which inspired the movie. Saindon adds, “Robert had some iconic artwork from James Cameron from 1998 or 1999 of Ido holding up Alita’s Cyber Core with a big red sky behind, and he made sure to get exactly that frame.” 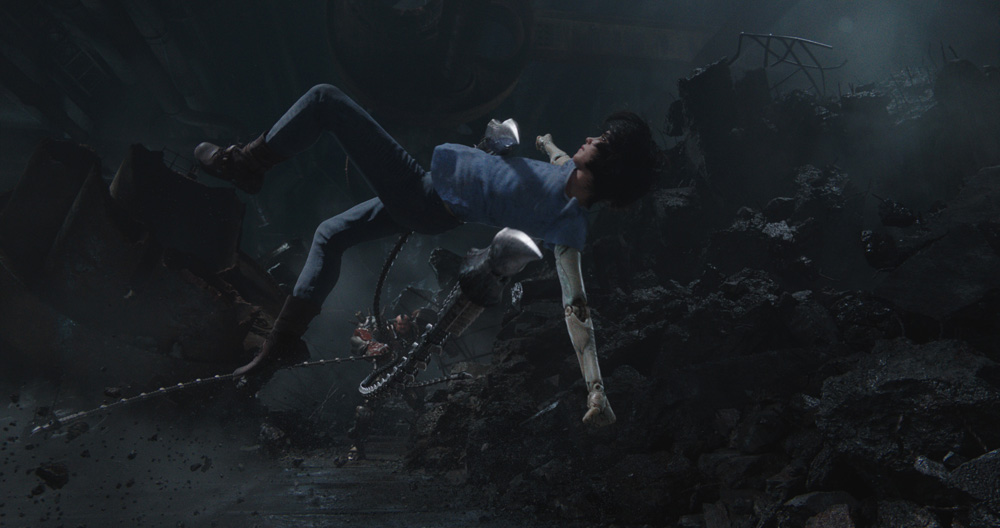 The first week of filming took place on the performance capture stage for the underwater sequence where Alita enters the crashed warship and discovers the Berserker body which she goes on to wear. “We had an actress who could hold her breath for seven minutes jump to the bottom of a pool with weights on her feet and go through the same performance that Rosa did,” says the vfx supe. “It was a perfect reference for what the cloth and hair would do.”

Of course, the film’s outstanding visuals owe a lot to the director’s initial planning and storyboards. “Robert went through and storyboarded all of the Motorball before we even got started,” explains Saindon. “Then our animation team led by Mike Cozens went in and keyframed the key poses that Robert had done. We went back and forth with Robert and Laeta Kalogridis [co-screenwriter] to get the basic blocking. James and Robert wanted the cameras to be like Rush with low angles and lots of camera shakes as you are coming through the track.”

“It has been fun for the animators because there’s not much performance capture you can do when everything takes place on powered rollerblades,” Saindon adds. “It’s a lot of keyframe animation. We got a lot inspiration from the poses and weapons that the characters have in the original manga.”