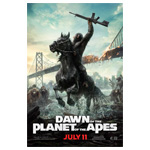 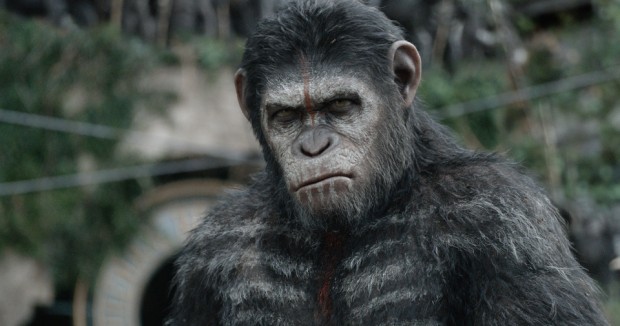 Director Matt Reeves talks about putting the focus on Andy Serkis’ Caesar for Dawn of the Planet of the Apes.

To Reeve’s amazement, Fox was willing to change course. “I wanted to do something that was totally Caesar-centric,” says Reeves, who previously directed the monster movie Cloverfield. “And I wanted to go up into the Muir Woods and see the civilization that they created and pick up where they left off, but after the viral apocalypse that knocked out the human race.

“What I loved in Rise was watching Caesar come toward articulation. But a weird thing happened for me in between the first time I watched Rise and the second time: I became a first-time father. And when watching Rise again, I had a new view of the movie, which was that Caesar reminded me of my son. I looked at him and I could see that there was tremendous comprehension of everything that he was seeing and the frustration he felt was not being able to speak yet. I didn’t want to lose that sense of coming into being for Caesar.

“Not only that, but I wanted to explore that moment when it could have been planet of the humans and apes. We know where it goes, but how did it happen? We also know the deep connection that Caesar has with human beings. So he’s torn. I also thought that the story in Rise was so compact and propulsive from his character’s point of view. He becomes this revolutionary, but what was it like to create this civilization and to have larger responsibilities? I kept thinking of it like The Godfather with apes. He was a leader but he was also a father. Suddenly, the decisions are not so easy because the stakes are so much higher. Whether or not the humans and apes can co-exist becomes the story and we live on the knife’s edge.”

However, Reeves had a more naturalistic aesthetic in mind for Dawn, which arrives in theaters July 11 from Fox. Aside from the fantastical conceit of intelligent apes, he wanted it to appear very realistic. But in order to push the photo-reality, Weta Digital had to make certain adjustments to its performance capture methodology.

“My pitch to Fox was: What if we were to do a whole movie on location in real lighting? It turns out that Weta had been thinking about that methodology as well and believed the apes could hold up to that photo-real standard,” Reeves says.

The director recalls a “crazy” lab shot in Rise that featured top fluorescent lighting. He was impressed with how well the models held up in that realistic environment, and was very encouraged going into Dawn about achieving even greater detail.

Naturally, he was also blown away by Serkis’ performance as Caesar, and wanted to see everything that Serkis did on set with the markers on his face side by side with Caesar to analyze the performance. It persuaded Reeves that they could improve the subtle details in the face and push a sense of vulnerability that was only hinted at in Rise.

“We spend a lot of time on animation and you don’t see a render for a long, long time,” Reeves says. “And so when I see the animation, I want to know if his eyes are as angry as Andy’s. But at the same time, he’s also sad and that comes from the redness on his lips, and we won’t see that until the render. So we sit there chasing the shapes that we see, but the detail that you would see in his eyes when the render comes through was incredible.

“Despite the fact that there are all of these anatomical differences, the details that they have chosen are so specific to Andy and to Toby Kebbell (who plays Koba), that I can’t see anything other than those two actors. But here’s the thing: the animation would matter a lot less if what we were trying to do was recreate Andy as Andy. And then they could just use the motion capture and whatever flaws there are in the technology would be the limits. But what they’re doing is essentially interpreting a performance, which is complete artistry. There is no Caesar without Andy and there is no Caesar without Weta.

“And I think there’s confusion on both sides. There are people that don’t understand how great an actor Andy is, and there are other people on the other side who have no idea what amazing animators the people at Weta are. They never stop pushing. It takes so many levels of translation and performance and commitment to achieve such realism.”