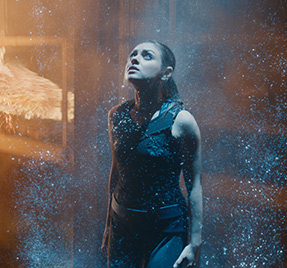 Now we know what it would be like if the Wachowskis made a Star Wars movie, because Jupiter Ascending (released February 6) is their kind of Matrix-y sci-fi. Channing Tatum plays a bad-ass interplanetary warrior who surfs through space on anti-gravity boots and Mila Kunis plays a janitor with royal blood. It’s got wild tech, crazy stunts, baroque planets and cool CG creatures.

But, with a twist: “Andy and Lana wanted to create a large-scale space opera, and in some of our early meetings they discussed how they wanted to keep it grounded,” recalls visual effects supervisor Dan Glass (who is currently working with the siblings on the Sense8 Netflix series). “And they were very keen about the way the stunt performances were physically driven. So even though Channing Tatum’s Cain Wise has gravity boots, they wanted it to feel like snowboarding or some kind of surfing or extreme sports. And they wanted the action that was captured or created digitally to carry that through.

“They were also very particular about the animation being very limited or highly based on physical reference, including the way your muscles twitch or the way you shift your weight. Another aesthetic aspect was that they wanted the visuals to be somewhat familiar, even though there are vastly superior technologies and a series of ancient races living in far-off planets.”

And the Wachowskis liked the idea that, somehow, these alien civilizations informed our own mythologies. This included how the Keepers and Sargon looked. They are the first all-CG creatures in the Wachowski canon and were animated by Framestore. The Keepers are modeled after the iconic alien “grays” and the Sargon are flying lizards.

“The idea here is that people glimpsed these creatures at one time but nobody believes them,” Glass continues. “The Keepers and Sargon are both anthropomorphic. The Sargon were designed to be more like dragons but took their own shape because they needed the right ferocity and torque and they had to wield a weapon and fight. For the fight scene with the main Sargon at the refinery, the interaction is significant. And that took a great deal of planning, animation revision and improvisation on set. This action sequence involved wrestling with a seven-foot stunt double and Tatum spinning from complex wire rigs and looking like he was skating on his anti-gravity boots.”

The thrilling Chicago chases, meanwhile, were handled by Double Negative, which built an assortment of rigs, including a new six-camera rig called the Panocam, which was mounted on a helicopter and covered nearly 180 degrees of action. During post, they could then blend the footage to create a more complex shot.

“The stunt team arrived early to conjure body languages and ways to build rigs that could capture massive and long, single stunts,” Glass explains. “We built up a lot of pieces either by building horse treadmills that we would suspend at angles with actors on wires that were flung around, or a clever rig that was built inside of the back of a pickup truck with Channing and Mila suspended from it while driving around the streets of Chicago. The body language was awesome. The ultimate stunts were literally hanging two stunt doubles from helicopters flown through Chicago at dawn shot from different vantage points.

“But rather than shooting millions of stills from rooftops that are pasted together with basic geometry to build cities, which doesn’t look quite right, Double Negative devised this camera rig where they could shoot massive wired-view plates and fly along the path that we had planned in previs. And that was amassed by six Red cameras that had to be stitched together with vast amounts of data. And the look of that really paid off. You can see all the reflections in windows and other surfaces.”

As far as the look of the alien worlds (under the guidance of production designer Hugh Bateup and VFX designer John Gaeta, who did early concept work with a team of artists), they went for something exotic in a gothic sort of way, yet familiar. That’s because the Wachowskis wanted us to connect with the environments. Architecturally, for example, they took medieval vaulted ceilings and turned them on their sides.

Then, in the middle of the movie, the Wachowskis hilariously pay homage to Brazil with an eight-minute sequence about infuriating bureaucracy complete with the same retro look of the Terry Gilliam cult favorite. In fact, Gilliam has a scene-stealing cameo.

“He literally came in for a day where he plays a character with a big monocle and poodles around and goes up to the machine and it smokes and sparks and laser etches the seal into Mila’s wrist,” Glass relates.

It’s all part of the Wachowski fun of looking forward and back and the same time.

Bill Desowitz is owner of Immersed in Movies (billdesowitz.com), author of James Bond Unmasked (jamesbondunmasked.com) and a regular contributor to Thompson on Hollywood and Animation Scoop at Indiewire.